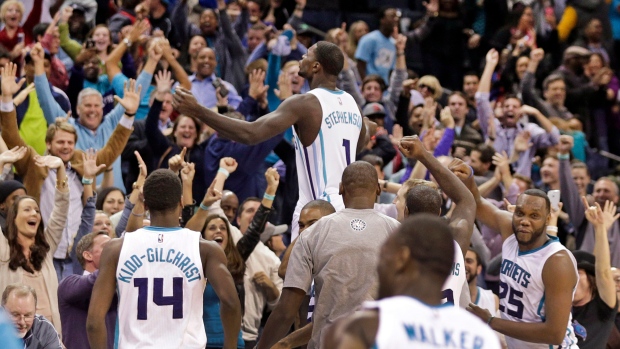 CHARLOTTE, N.C. - With 2.7 seconds left in the second overtime and the game tied, an exhausted Lance Stephenson looked at Steve Clifford and said, "C'mon Coach, draw me up a play."

Stephenson inbounded the ball to Marvin Williams, got it back off a handoff and knocked down a 33-foot jumper off the glass at the buzzer to lift the Charlotte Hornets to a 122-119 victory over the Atlanta Hawks on Friday night.

Stephenson, who played 47 minutes, celebrated by racing to the scorer's table and leaping on top. He started pounding his chest as the teal and purple-clad crowd went wild.

Stephenson said he's hit shots to tie games before but had never hit a game-winner at any level of basketball.

"For me to hit that big shot, there was a lot of emotion that came out," Stephenson said. "I got real hyped."

When asked if he called "bank," Stephenson laughed and said, "I can't hit a swish yet, so I tried to throw it off the backboard and it went in."

Stephenson registered his first double-double with the Hornets, finishing with 17 points and 13 rebounds.

"I haven't made a shot all season long," said Stephenson, who shot 26.7 per cent in his first five games with his new team. "Hopefully that will give me more confidence to keep hitting more shots."

Al Jefferson scored a season-high 34 points and reserve Gary Neal added 23 points as the Hornets (3-3) beat the Hawks in Charlotte for the first time since 2011, snapping a six-game home losing streak to their division rivals.

The Hornets had a chance to win the game in regulation when Jefferson missed a key free throw with 9.9 seconds left that would have given his team a one-point lead, and also surrendered a six-point lead in the first overtime.

With the game tied at the end of the second overtime, Kemba Walker drove, lost his balance and threw up a shot that missed the rim, resulting in a 24-second violation with 2.7 seconds left. That gave the Hawks a chance to win it, but Korver was called for an illegal screen on Williams at midcourt, giving the ball back to the Hornets with no time elapsed off the clock.

"The league is working really hard to gauge when players were overreacting," Budenholzer said. "I think it may have been case where Kyle set a good screen. That's part of the game. Calls go against you. I obviously don't agree with it."

It was an exhausting, physical game that took its toll in the players.

Jefferson said he was thankful Stephenson hit the shot when he did, saying he didn't think he could have played another five-minute overtime period.

"Lance is as tough as nails, those New York guys," Jefferson said. "You see when he got the ball what he did with it."

The Hawks had a chance to win it at the end of regulation, but Paul Millsap missed an 18-footer at the buzzer.

The Hornets had a six-point lead in overtime with 24 seconds left, but managed to waste that away. Teague hit a driving layup and Korver knocked down a 3-pointer after Atlanta won a jump ball, trimming the Charlotte lead to 108-107 with 12 seconds left.

Walker was fouled on the inbounds pass and hit two free throws to push the lead to three. Mike Scott missed a 3-pointer with 5 seconds left, but the ball bounced off Walker. This time, Scott buried a 3-pointer from the right baseline on an inbounds play under the Hawks' basket.

Hawks: The Hawks have shared the ball well, entering the game averaging an NBA-high 26 assists per game. They had 28 against Charlotte.

Hornets: Michael Kidd-Gilchrist returned to the starting lineup after missing the last two games with a rib injury. ... The Hornets head out on a four-game West Coast swing that includes games against the Lakers, Trail Blazers, Suns and Warriors.

Rookie P.J. Hairston replaced Gerald Henderson as the first player off the bench for the Hornets and had an immediate impact, knocking down a 3-pointer from the corner and drawing a foul to complete a four-point play. However, those were his only points in 12 minutes.