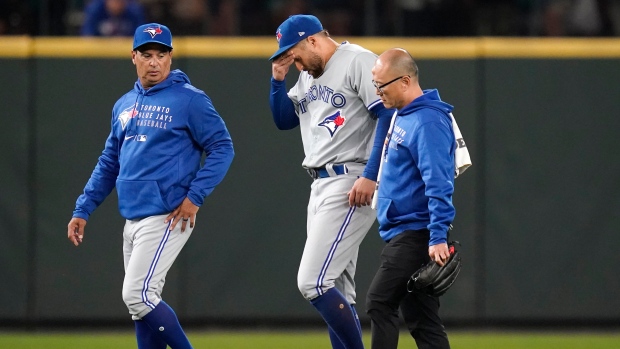 Just when the Toronto Blue Jays were ready to play 11 of their next 15 games against teams below .500, they got bad news on centre fielder George Springer.

Springer left Saturday’s game with a left ankle sprain after running into the wall while tracking down a fly ball. On Monday’s off day he informed the team that his left knee was also sore, and an MRI revealed a sprain. It’s unclear how long he will be out, but manager Charlie Montoyo saying that he hopes to have Springer back before the end of the season implies it is a fairly significant sprain.

This is horrible news for the Jays. The one thing that remains clear is that the team’s pitching staff needs a margin for error as they are not a shutdown crew. The continuing issues in the bullpen scream for three- and four-run leads to safely close out games.

Springer’s bat will no doubt be missed, but the Jays have gone through this before. Their big free-agent signing this off-season has only played in 49 of the team’s 119 games. Springer has shown why the Jays gave him the big contract, hitting .269/.362/.610 with 16 homers, 35 RBI and 40 runs scored.

The Blue Jays can still earn a wild-card berth, but the loss of Springer is going to make a difficult task that much harder. But where there is a crisis, there is an opportunity. Everyone is going to have to compensate for some part of Springer’s absence.

Randall Grichuk will likely get most of the playing time in centre field, and he is more than capable of playing at a high level, even if he can be streaky. The Jays also need Vladimir Guerrero Jr. to return to the slugger he was in the first three months of the season, when he was the best hitter in the American League. They need Bo Bichette to get hot like he was in July. Cavan Biggio is due back from the injured list soon as he is on rehab assignment. He needs to get on base and produce runs.

Clearly, Springer’s injury comes at an inopportune time as the Jays need to make up ground in the playoff hunt. The division title seems unattainable as they are 10.5 games behind, but they only trail the Oakland Athletics by 4.5 games in the wild-card race. The path has narrowed for the Jays to get to October baseball.

The New York Mets had a change in ownership last off-season. New owner Steve Cohen is a life-long Mets fan who made his money in hedge funds. He has been very active on social media since taking over the club. He banters with fans and even asks for their opinions on the team.

On Wednesday Cohen tweeted, “It’s hard to understand how professional hitters can be this unproductive. The best teams have a more disciplined approach. The slugging and OPS numbers don’t lie.”

This tweet is reminiscent of former Yankee owner George Steinbrenner, who would often publicly call out his club for underperforming.

Owners certainly have the right to say what they want but someone needs to have the courage to tell Cohen that comments like the ones in his tweet do not help. When hitters aren’t hitting, it isn’t because they aren’t trying hard enough. Likely they are trying too hard. Pressure from the owner, boos from fans and constant questions from the media only add to the problem.  They do not help hitters break out of slumps; they prolong them.

The next time Cohen goes in the clubhouse, he should expect a bit of a chilly reception. Players don’t criticize the owner and they expect the same from the owner. One of the first rules you learn in professional baseball is that you never show up your teammates. The owner is a different kind of teammate, but a teammate all the same.

The Mets have an interim general manager in Zack Scott. He certainly won’t call out his owner for his tweet because he’s hoping to have the interim removed from his title. If anyone is to sit with Cohen and tell him what he did doesn’t help, it will be club president Sandy Alderson.

General managers must manage up and down the organizational chart. Owners have a little bit more knowledge about the game than fans because they sit in meetings and learn, but that little bit of knowledge can be dangerous when they communicate through social media.

A’s pitcher Chris Bassitt was hit with a line drive in his face on Tuesday night but avoided a catastrophic injury. He does have a displaced tripod fracture in his right cheek, but it could have been worse. It’s shocking this doesn’t happen more often, considering how hard pitchers throw and how much hitters in today’s game seek exit velocity.

I fear that at some point we will see a catastrophic event. I think we must ask ourselves: If a pitcher were to die after getting hit by a line drive, would we legislate pitchers to wear some sort of head and face protection? I believe the answer is yes. That’s what led to base coaches wearing helmets in the coach’s boxes. A minor-league coach was killed when he was hit in the head by a line drive, which led to the rule being instituted.

We should not wait for a pitcher to die. There is technology for hats that can protect a pitcher from line drives. It may not have saved Bassitt from his injury, but it could save a life.

The other way pitchers can be protected is as a residual effect of a potential rule change. It is under consideration to move the mound back a foot or more. The Atlantic League, an eight-team independent partner league of MLB, is currently experimenting with the change.

The intent is to add offence to the game by giving hitters more time to react to high-velocity fastballs. The other benefit of this rule change is that it would give pitchers that much more time to react on a line drive back up the middle.

I think it should be mandated that all hitters wear C-Flap helmets to protect them from high-velocity fastballs at their face and head. The same care should be shown to pitchers.

- The New York Yankees have come storming back into the playoff picture as they are now the top wild-card team in the American League. They are 28-11 since July 6. On Thursday night they implemented what they call their goal-line offence. In football, that is where all the biggest players enter the game to pound the ball over the goal line. For the Yankees it meant five big boppers in the front of the lineup: Luke Voit (DH), Anthony Rizzo (1B), Aaron Judge (CF), Joey Gallo (LF) and Giancarlo Stanton (RF). They are looking to pound the ball over the wall.

- There are reports that MLB made a proposal to the Major League Baseball Players Association (MLBPA) for the new collective bargaining agreement that includes a $100-million floor on payrolls for all teams and a competitive balance tax starting at $180 million (down from $210 million) with more stringent taxes that would help subsidize the smaller-market teams to be able to spend at least $100 million. This is an effort by the owners to satisfy the players' desire to do away with tanking and rebuilding teams. This plan would make every team spend on players, but the trade-off would be limits on the upper end, likely keeping teams under the $180-million threshold. It’s unlikely the union accepts this structure. The MLBPA always has been reluctant to negotiate a floor for salaries because once that is in a CBA a ceiling is the next step, which they do not want. The union will be in favour on the $100-million floor but not the strict limits on the upper end.

- Cincinnati Reds slugger Joey Votto reached the 2,000-hit threshold this week, prompting discussion about whether the Canadian is a Hall of Famer. In my view, there is no doubt about it. He absolutely is headed for Cooperstown. Votto won the MVP award in 2010. He has led the league in OBP seven different seasons. He led the league in OPS twice and in slugging percentage once. Plus, he has a .303/.417/.520 slash line. He has a 63.1 WAR in his 15-year career. He has a 148 career OPS+, which means that he has been 48 per cent better than average – slightly better than Hall of Famers Edgar Martinez, Willie McCovey and Willie Stargell.

- The Atlanta Braves have been red-hot since the All-Star break. They are 21-11 since then and have gone from third place and four games behind the Mets to first place with a four-game lead over the Philadelphia Phillies and five games over the Mets. Credit general manager Alex Anthopoulos for acquiring four outfielders at the trade deadline, which has sparked this team back to the top of the division.  They will win the NL East.

- Don’t look now but the St. Louis Cardinals are playing good baseball and are just 3.5 games behind the second wild-card team (San Diego). The Reds are just one game behind the Padres. The Padres have long been considered a shoo-in for the playoffs but have been fading quickly as their starting pitching is wilting. It would not be a surprise now to see the Reds or Cardinals as the second wild-card team and the Padres fading completely out of the picture.