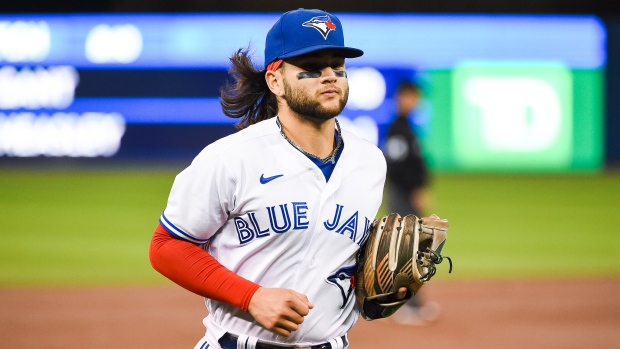 It’s good news that the Toronto Blue Jays haven’t really hit yet. Let that sink in a bit. It’s a positive that they haven’t been explosive on offence.

Why? Because the Blue Jays are 8-5 despite underperforming with the bats. They will get hot, and it will happen soon. Expect the team to go on a winning streak when that happens.

The shortened spring training doesn’t just affect the pitchers, even though all we talk about is pitchers not being stretched out. The reality is that pitchers are often ahead of hitters in spring training and early in the season. The pitchers are all fresh because of the expanded rosters, so even though the starters are limited to a certain number of pitches, they are relieved by a steady supply of flamethrowers. The cold weather also more negatively impacts hitters. The offence will be here soon enough.

The Blue Jays hitter who has most noticeably struggled early is Bo Bichette, who is hitting just .224/.224/.310. He has scored five runs and driven in four so far, with two doubles and one homer. Bichette has not delivered the type of production that he or the club expected.

But it’s early, so there is no need to panic. There is nothing wrong with Bichette’s swing, but there is with his timing and decision making. It looks like he is getting caught between pitches –he’s behind the fastball and out in front of the breaking pitches and changeups.

The statistic that leaps off the page at me is that Bichette has zero walks and fourteen strikeouts so far. The young Jays’ shortstop doesn’t normally walk much, but this is extreme. Bichette would rather get a hit than take a walk, but he is at the point that he needs to walk to start hitting.

Bichette has yet to have a 3-0 or 3-1 count in any of his 54 at-bats. He has been down or even in counts in more than half of his plate appearances. Bichette needs to remember that the first strike he sees may not be the best strike he sees. Sometimes taking a borderline pitch will lead to a better pitch to hit. The best way to get a hit is to take pitches. Force the pitcher to throw the ball over the plate. Hit your pitch, not his pitch.

I would also consider changing the lineup while Teoscar Hernandez is on the injured list. I would move Vladimir Guerrero Jr. up to the second spot in the lineup behind George Springer or Ramiel Tapia, then slot Bichette behind Guerrero. This would get Guerrero more at-bats and Bichette will offer protection for Guerrero more than Zach Collins or Lourdes Gurriel Jr. can. Plus, Bichette would get better pitches to hit with Guerrero on base. It would maximize Guerrero’s production and help jump start Bichette.

Hyun Jin Ryu was pitching like his arm hurt, so it wasn’t a surprise the Jays placed him on the injured list with forearm inflammation.

Ryu’s struggles started in the second half of last season. The Jays are wondering if his arm has been hurting for a while and he just didn’t speak up about it. Ryu is no stranger to the injured list. He’s had multiple injuries and several surgeries over his career. There are no indications that this forearm issue is serious, but Ryu is an older pitcher with a health history.

Ryu lost command of his pitches last year, and more recently lost a few miles per hour on his fastball. That’s not a good combination for a command and control pitcher who doesn’t have overpowering stuff. The velocity of his fastball is important because the differential in speed between his fastball and change-up is critical for his success.  He has lacked the ability to finish his pitches which can happen when there is pain in the forearm.  Consciously or subconsciously, a pitcher call pull back on his pitches to avoid the pain.

Even when Ryu returns to full health, Jays manager Charlie Montoyo will have to manage the lefty’s innings. The veteran starter can’t be allowed to pitch to the point of fatigue because it is too close to his being injured.  Ryu needs to be removed when he has strength remaining. If he gets too close to the edge the ground will crumble out from underneath him.

In the meantime, the rest of the rotation seems to be compensating quite nicely.  Ross Stripling is a more than serviceable spot starter.

- I mentioned above that the offence for the Jays has underperformed so far this year, but it isn’t just a Blue Jays phenomenon. Runs per game are down this season compared to last. So are home runs and therefore slugging percentage. There are several possible reasons for this: weather, preparation, pitch selection, and an adjustment in the approach of hitters and the storage of baseballs.

As I mentioned, cold weather is tougher on the hitters than it is pitchers. Cold wind blowing in the hitters’ eyes makes it tough to see the ball. Day games and shadows have made seeing the ball difficult in a few stadiums.

The pitchers are normally ahead of the hitters early in the season, which is exacerbated this year by the shortened spring training. Pitchers continue to throw their fastballs less and their breaking pitches and off-speed pitches more. The numbers justify the changes in the sequencing of pitches.

I’ve also seen more hitters looking to hit the ball away from the shift instead of over it. This is cutting down on home runs and, most likely, runs. Finally, the baseballs in every city are being stored in standardized humidors, which will limit the way the ball carries in some of the drier environments.

The offences will start to heat up when the weather does, but we will likely not get to the levels of the recent past.

- The first couple of weeks of the season has been an opportunity for the game to make up for some of the lost emotional connection with the fans stemming from the lockout. But many fans are complaining that baseball is shooting itself in the foot.

Dodgers ace Clayton Kershaw was removed after seven innings of a perfect game because of his pitch count, much to the dismay of fans everywhere. A chance at baseball immortality was put aside for winning that game and games later in the season. The trade-off was fans losing an opportunity to see history.

Detroit Tigers slugger Miguel Cabrera was sitting at 2,999 hits when he came to the plate in the eighth inning on Thursday afternoon against the Yankees. With runners on second and third with two outs, Yankees manager Aaron Boone opted to intentionally walk Cabrera because Austin Meadows, a lefty hitter, was on-deck and was a better matchup for lefty reliever Lucas Luetge.

The rabid crowd in Detroit went home angry despite the 3-0 win. The fans wanted a win and Miggy’s 3,000 hit.  But if they had the choice, they would have voted for the 3,000th hit.

Angels manager Joe Maddon intentionally walked Rangers shortstop Corey Seager with the bases loaded in the fourth inning of a game last week, increasing L.A.’s deficit to two runs. No manager has ever walked in a run while losing in the history of the game. Only twice has a manager called for an intentional walk with the bases loaded with a lead, and Maddon is one of them. After a sacrifice fly and a balk in that same inning, Texas took a 6-2 lead.

Fans’ heads had to be spinning trying to figure out what Maddon was doing. In fact, the umpires should have given Maddon their microphone to explain his thinking to the confused fans. Maddon was trying to win the game over the last five innings in a peculiar way. And somehow, he did, as the Angels rallied to pull out a 9-6 win.

Baseball’s fan base is skewing older, and those fans love the history and tradition of the game. Sure, everyone wants their teams to win, but fans want memories more than wins. Baseball has always delivered that to its fans. But this new baseball is about winning at any cost – history and memories be damned.

Something has to give because the game may be winning the battle (games) but losing the war (fans). There is no easy answer but sometimes a win for the greater good is more important than a win for a team, even your team.