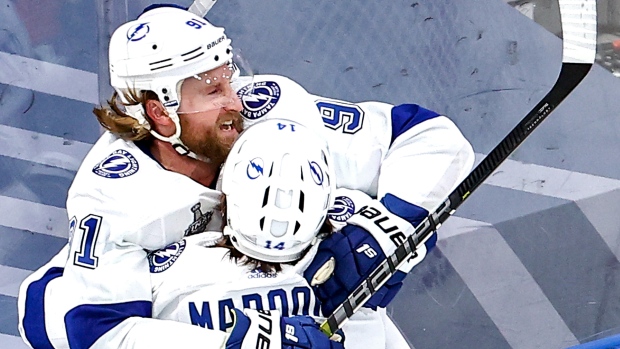 EDMONTON — After seven months sitting on the shelf, Tampa Bay Lightning captain Steven Stamkos came back for the Stanley Cup final Wednesday — albeit very briefly — and scored on his first shot on net.

Stamkos, out since Feb. 25 to recover from core muscle surgery and a lower-body injury, made the score 2-0 less than seven minutes in as the Lightning beat the Dallas Stars 5-2 in Game 3 at Rogers Place.

The Lightning lead the best-of-seven series 2-1.

Game 4 is set for Friday and Game 5 just 24 hours after that on Saturday night.

"It was just an amazing experience to share with my teammates ... just to be able to get out into a game and have an impact on a game which a month ago may have never been possible," said Stamkos, from Markham, Ont.

"I was just really happy to obviously contribute in a game in which I didn't play too much."

Stamkos, the 30-year-old two-time winner of the Rocket Richard Trophy as the league's goal-scoring leader, played on the fourth line with Cedric Paquette and Pat Maroon.

He took a cross-ice pass from defenceman Victor Hedman and, with a burst of speed, slipped through a tiny space between the boards and Dallas defender Esa Lindell, flew in and fired a wrist shot from the right face-off circle top-shelf far side on Stars goalie Anton Khudobin.

And that was it.

Stamkos played 2:47 in the first period, stayed in the dressing room until well into the second and didn't leave the bench for the rest of the game, staying on to cheer on his teammates.

The NHL is not releasing injury information and Stamkos declined to say what caused him to stay off the ice for the balance of the game.

"I wanted to play as much as I could. Obviously there's an issue that I've been working through. We'll see what happens from here," he said.

Kucherov also had an assist and continues to lead all playoff scorers with seven goals and 30 points.

Tampa goalie Andrei Vasilevskiy stopped 21 shots for his 16th win of the playoffs.

After Stamkos scored, Tampa's bench erupted in cheers that reverberated throughout the empty Rogers Place. The playoff games are being played without spectators to avoid spreading the conronavirus.

"It was amazing to have (Stamkos) back on the ice," said Hedman.

"You can see the reaction on the ice and on our bench when he scored that goal. This is how much he means to us as a teammate, as a leader, and as a friend. Super happy for him."

Jason Dickinson and Miro Heiskanen replied for Dallas. Khudobin turned away 24-of-29 shots and was replaced by Jake Oettinger for the start of the third period when the score was 5-1. Khudobin is 13-8 in the 2020 post-season.

Dallas defenceman John Klingberg, asked about the lift Stamkos gave the Tampa bench, said, "It's the Stanley Cup final. We all play with emotion.

"We got on our heels a little bit in the second period. We're just going to take that momentum back in the next game, come hard at them and even the series."

Kucherov opened the scoring when Heiskanen lost the puck at his own blue-line. Kucherov pounced on it and fired a low missile blocker-side on a breakaway.

Dallas got on the board before the period was out. Roope Hintz stole the puck in the Tampa end and dished it to Dickinson for a short-handed one-timer from the top of the left face-off circle.

Hedman scored on the power play, firing a shot from the slot through traffic. Kucherov then fed a streaking Point on a 3-on-1 for Point's 11th goal of the playoffs. Palat then tucked in the puck on a goalmouth scramble.

In the third period, Dallas made it 5-2 when the puck bounced in on a goalmouth melee. Heiskanen got credit.

Stamkos is in his 12th season with the Lightning. He produced 29 goals and 66 points in the regular season, which was cut short on March 12 due to the spread of COVID-19.

This report by The Canadian Press was first published Sept. 23, 2020.