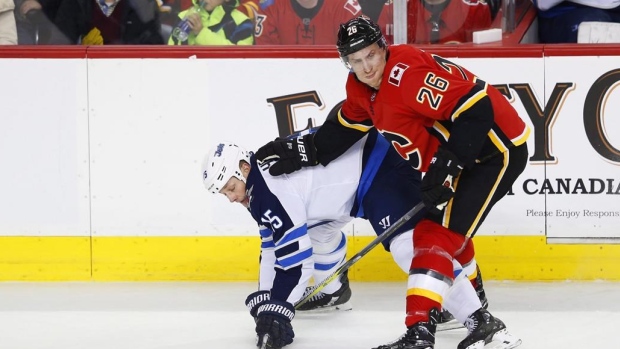 It’s that quiet time of the NHL off-season where Calgary’s buyout of defenceman Michael Stone qualifies as a big story.

Stone will be a forgotten cap casualty in relatively short order, but his story is a good one if you are interested in how teams can avoid cap mistakes. If you don’t think there are serious pitfalls still in terms of how front offices evaluate personnel, well, you aren’t paying attention.

Back in 2017, Stone signed a three year, $10.5-million contract to assume a second-pairing role with an improving Calgary club – this just a few months after the Flames moved two mid-round picks to the Coyotes to acquire him at the trade deadline. At the time, the Flames rationalized the trade accordingly:

- Plays both sides of special teams

- Familiarity with the Calgary area

- Character player who is a consummate pro

Stone would play a full 82-game season in 2017-18, but missed significant time last season due to a blood clot. That injury opened the door up for a multitude of younger players – including Juuso Valimaki and Rasmus Andersson – to pass him on the depth chart, culminating in the buyout.

Back to the justification for the trade for a moment: You can grade any of those components as you see fit. When front offices talk up a player’s locker room impact, I generally accept it at face value – their interactions with these types of players far outweigh what any of us see, so judging it is next to impossible. We do have access to a wealth of statistical information and video though, and that’s tremendously useful when vetting on-ice contributions.

Let’s go back in time to the summer of 2017, which would postdate the initial trade but predate Calgary’s decision to offer Stone a three-year extension. What we need to do is get a feel for Stone’s individual contributions at both ends of the ice, and across multiple game states.

As a starting point, we can look at Stone’s history (2011-17) in terms of how he affected his teammates’ goals (actual), goals (expected), and shot differential over that time.

Here are his percentile rankings relative to his defensive peers over that seven-year window, starting at even strength: 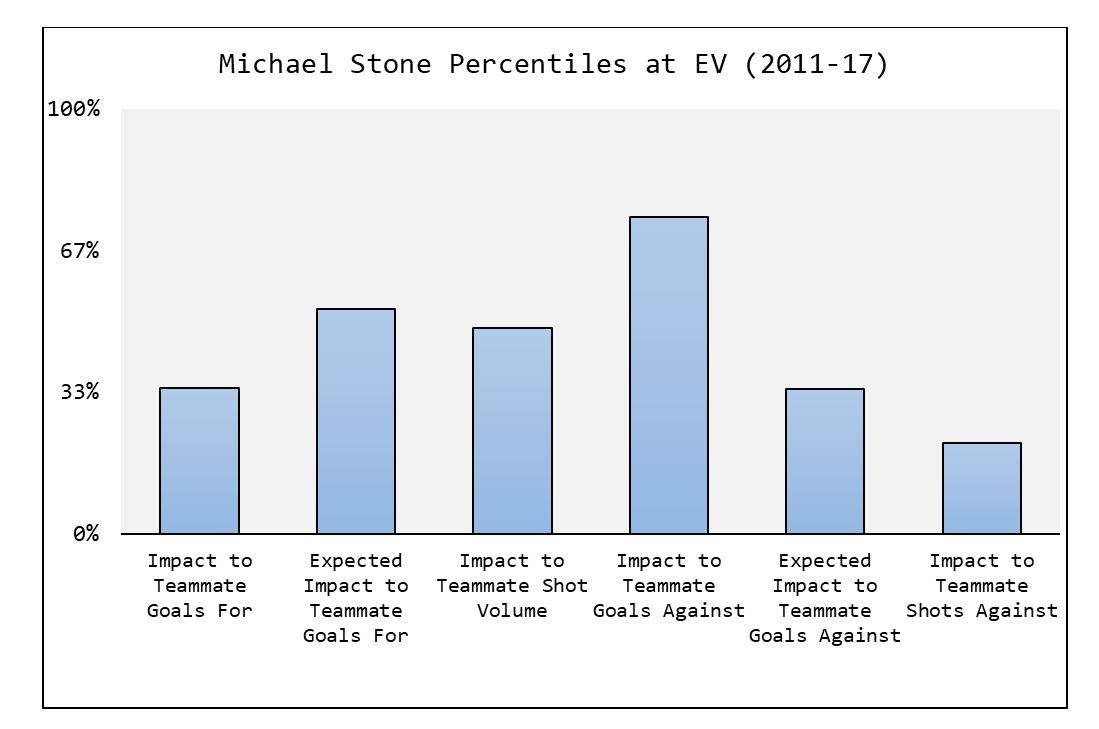 On the basis of nearly 7,000 minutes, Calgary had every right to believe that Stone was a serviceable NHL defender. His even-strength contributions suggested he was something of a tweener – perhaps not good enough to play full-time on a second pairing, but more than capable of soaking up third-pairing ice time.

Either way, the acquisition of Stone was defensible. Calgary needed another serviceable body on the blueline and Stone had shown in spots – save an ugly 2014-15 season – that he was worthy of a look.

But that’s just teammate impact, and that’s just at even strength. A big part of the reason Stone was acquired was his heavier usage in Arizona and special teams work, so we need to get our hands around all of Stone’s contributions. For this type of exercise I like to use Goals Above Replacement, a regression-based approach that summarizes a player’s total contributions to their team in one statistic.

If we isolate for even-strength performance, power-play performance, shorthanded performance, and penalty differential performance, we can see how much Stone moved the needle over the years. Unfortunately, the answer is not very much: 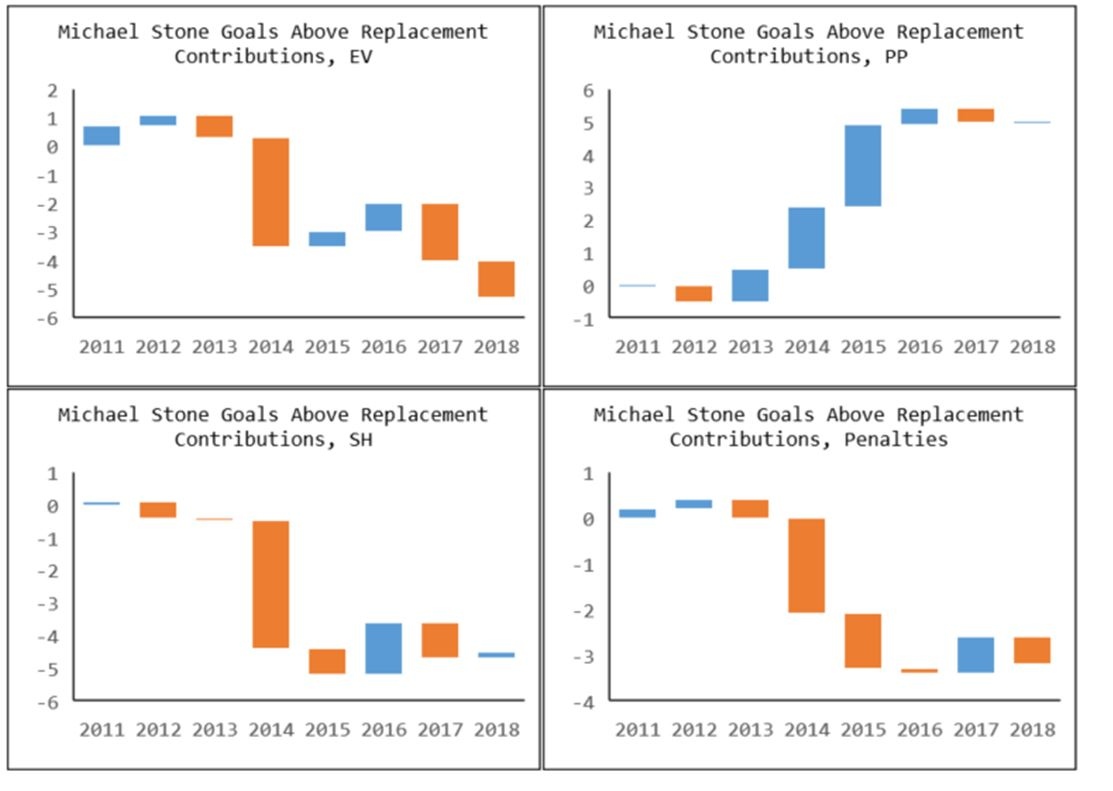 One of the ironic things about Stone and the data here is that he probably is a better offensive player than people give him credit for. He has regularly been a positive contributor on the power play – recall his 14 power-play points in the 2015-16 season alone as one example. Stone added one win based on power-play performance alone from 2011-17, which isn’t insignificant.

The problem is that the rest of the data, and really the rest of Stone’s resume, screams replaceable defender. He’s been a negative presence at both even strength and in shorthanded situations, and has carried a slightly negative penalty differential over the course of his career.

That’s not to say Stone was or is a bad hockey player. But it does show that guys like Stone are quite easy to find both in the market and internally through a team’s own prospect pool. Overpaying for true third-pairing defencemen – the same can be said for true third- and fourth-line forwards – is a cardinal sin in the salary cap era. Calgary not only moved picks to acquire Stone, but they then extended him on a deal that screamed overpay.

In a vacuum, overpaying a player like Stone shouldn’t seem like a huge deal. But the reality of the salary cap era is you are constantly balancing performance expectations and financial outlay against the development and trajectory of your team.

Calgary, a team with Stanley Cup aspirations and in a serious cap crunch with important restricted free agents to sign, needed to free up the space. Now the Flames will have to operate with a pared-down salary cap over the next two seasons, with Stone’s buyout consuming about 1.3 per cent of the cap.

Not the biggest miss in the world, but a controllable one. Sometimes, those sting the most.