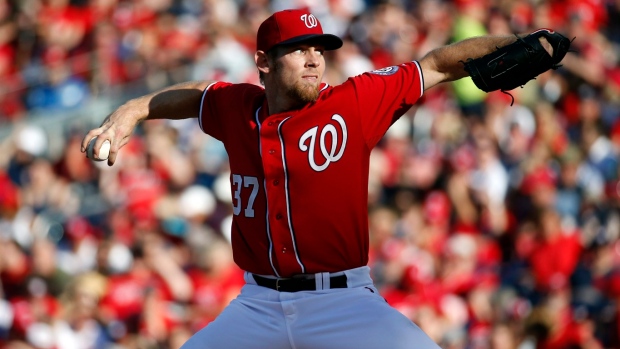 WASHINGTON - For his past six starts, Stephen Strasburg has pitched about as well as anyone could ask.

It's his next outing that everyone will be waiting to see.

Strasburg took over the league lead in strikeouts and gave up only two hits through six scoreless innings in his final tuneup ahead of his first post-season, helping the NL East champion Washington Nationals beat the Miami Marlins 5-1 on Saturday.

"His strength is good. He's throwing the ball where he wants to, making pitches where he needs to. Typical Stephen of what we've seen all year long," Nationals manager Matt Williams said. "I think he's pitching really well. I think he's ready for next week."

With shadows stretching across the field after the 4:07 p.m. first pitch, Strasburg (14-11) spotted his fastball at 97 mph and mixed in breaking balls that confounded a Marlins lineup missing the injured Giancarlo Stanton. Strasburg finished with seven strikeouts — giving him 242, three more than Clayton Kershaw of the Dodgers — and one walk.

"That's what he used to look like when he was in college, being able to pump it up like that for seven, eight innings," said Bryce Harper, who dashed home and scored on a head-first slide when Strasburg was credited with an RBI on a sacrifice bunt. "'Stras' has been unbelievable for the past month, and pretty much all year long, he's been great. So it's a lot of fun to watch."

"My arm felt good," Strasburg said. "Just went out there and tried to execute pitches. My changeup was working really well and I threw my curveball for strikes when I needed to."

Next up will be the playoff debut for the No. 1 overall pick in the 2009 amateur draft. Two years ago, when they also had the NL's best record, the Nationals shut down Strasburg in September to limit his innings as he came back from reconstructive elbow surgery.

On Saturday, Strasburg gave up a double to Jeff Mathis, and a single to Casey McGehee on a liner that went off right fielder Jayson Werth's glove. That one originally was ruled an error, then changed to a hit.

Miami's Nathan Eovaldi (6-14) gave up two runs in seven innings in a game played a day after the Nationals, who are now 95-66, assured themselves of home-field advantage throughout the NL playoffs — and a week after the Marlins were officially eliminated from wild-card contention.

"It was a tough day for us offensively," Marlins manager Mike Redmond said. "We didn't get anything going, really."

Williams trotted out what might be the lineup for Game 1 of Washington's NL division series Friday. But he also removed starters starting in the sixth, when Ryan Zimmerman went in to play first base for Adam LaRoche. Zimmerman recently returned after missing 55 games because of an injured right hamstring; he made a fielding error, failing to glove a grounder in the ninth, and singled, making him 5 for 15 since coming off the disabled list.

"We have to be mindful of his health, first and foremost," Williams said. "So if he says, 'I'm a little bit sore,' we're not going to push him."

What Williams hasn't stated yet is what role Zimmerman, who turns 30 on Sunday, will have in the post-season. The way he's been used — usually in left field or as a pinch hitter; never at his original position, third base; never starting consecutive games — appears to indicate the 2009 NL All-Star could be destined for reserve duty.

Asked whether Zimmerman would be on the team's division series roster — a question that speaks volumes about where things stand at the moment for a guy with a $100 million contract — Williams responded: "Unless something happens, yeah. His timing is good at the plate. He's capable of playing wherever we would ask him to play."

Nationals RHP Jordan Zimmermann (13-5, 2.78 ERA) starts Sunday, his first outing since taking a line drive off the side of his pitching shoulder last weekend. He faces RHP Henderson Alvarez (12-6, 2.70).