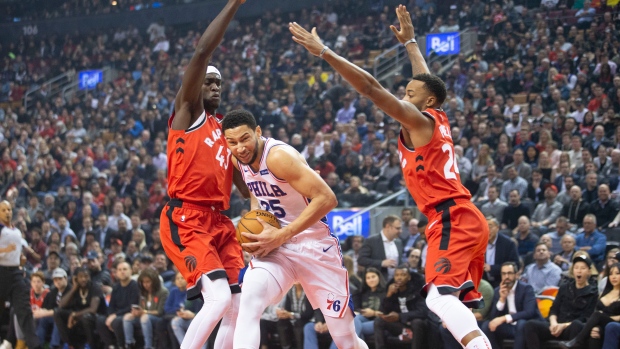 The Philadelphia 76ers will need more of Ben Simmons at his best when they visit the Toronto Raptors for the second time this season Wednesday night.

The Raptors, who defeated the visiting 76ers 101-96 on Nov. 25, are healthy again with the return of four injured players and survived a late-game rally to defeat the host Atlanta Hawks 122-117 Monday afternoon for their fourth straight win.

The Raptors had 27 points off the bench Monday from Norman Powell, who has scored at least 20 points in each of his five games since returning from a left shoulder injury.

Powell's 17 points in the fourth quarter helped thwart Atlanta's comeback. The Raptors led by 21 points with 4:30 remaining in the game.

"I think he's comfortable in the situation of being our proper sixth man," said Raptors guard Kyle Lowry, who had 10 points and seven assists Monday. "You know you have to go out there and score. You play and score with confidence. I think his shot is just falling. He's in a rhythm."

Simmons, meanwhile, was at the top of his game Monday when he matched his career best with 34 points and added 12 rebounds, 12 assists, five steals and two blocks in a 117-111 road victory over the Brooklyn Nets.

It was the fourth triple-double of the season for Simmons and his 26th in 203 career games.

"There was a determination," 76ers coach Brett Brown said. "There was a spirit. There was a committed performance offensive and defensively, and he wasn't going to let the team lose. We're all going to look at his stats and say, 'Wow.'"

When the 76ers visited Toronto for the first time this season, Joel Embiid (0 for 11 from the field) was scoreless for the first time in his career. Embiid scored 10 points and grabbed eight rebounds in the rematch on Dec. 8 in Philadelphia as the 76ers prevailed 110-104.

Embiid will not play this time in Toronto. He is out with a torn ligament in his left ring finger, putting an extra load on Simmons.

"Just giving my guys defensive energy, pushing the ball, communicating, just using my voice on the floor," he said. "I just came in with that mindset to win. I know it's going to be tough every time we play a team like this. I just wanted to win."

The win in Brooklyn was the second consecutive road victory for the 76ers, who had lost their previous six away games.

When the 76ers defeated the Raptors in Philadelphia, they had 26 points from Tobias Harris and 16 points, 11 rebounds and nine assists from Simmons. Rookie Matisse Thybulle added a career-best 20 points.

In the absence of Embiid, Al Horford has been starting at centre. He scored 19 points Monday after being listed as questionable for the game with a sprained left hand.