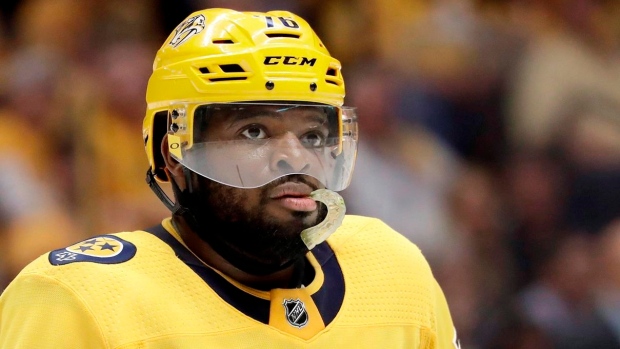 With the Nashville Predators making an early playoff exit for the second straight year, P.K. Subban's name has surfaced in the rumour mill as the team mulls potential changes.

Subban, who has spent the past three seasons in Nashville since being traded by the Montreal Canadiens, said Wednesday he wants to stay with the Predators but understands why his name has come up in speculation.

"I can't think of anything in a negative way about this organization, the city or my transition here, that would want me to play anywhere else," Subban said, per NHL.com. "But at the same token, if I'm talking facts, I'm the highest-paid player on this team and with that comes a responsibility. Just like everybody else, the responsibility is on me to take the fact that we didn't win the first round, we didn't get out of the first round and we didn't want to accomplish what we wanted to accomplish. I hope I'm a part of the solution. I hope that I can be here and be part of that, but at the same token I'm prepared to understand that this organization deserves and demands the best, and they should. And the city and the fans deserve to have the best team on the ice come September.

"All I can do is prepare to get myself prepared the best I can to win a Stanley Cup and to do my job. I feel very confident about the years that I've had here with the play of our team, and that's the most important thing. My job was just to come in and try to fit in around the great core group of players that they've had here and they've tried to build a championship team around do my job. I love the core group. I love the guys here. All I can hope is to continue to try to help the team win a championship. That's it."

In 63 games this season, Subban scored nine goals and posted 31 points - his lowest total since becoming a full-time NHLer with the Canadiens in 2010. He added one goal and three points in six games in the Predators’ first-round exit against the Dallas Stars.

The Predators reached the Stanley Cup Final in Subban's first year with the team, but exited in the second round last year before taking another step backwards this season.

The 29-year-old, who is signed for three more seasons at a cap hit of $9 million, said Wednesday he believes the Predators will be in contention for the Stanley Cup once again next spring.

"For me, I feel I have a lot of good, solid years to come and I have a lot more to give to try and win a championship, and I feel we can accomplish that here," Subban said. "That's my only job now is to recover, rest and make use of this time so that we can win a Cup in this city. Anybody who doesn't believe we have the players to do that is wrong."