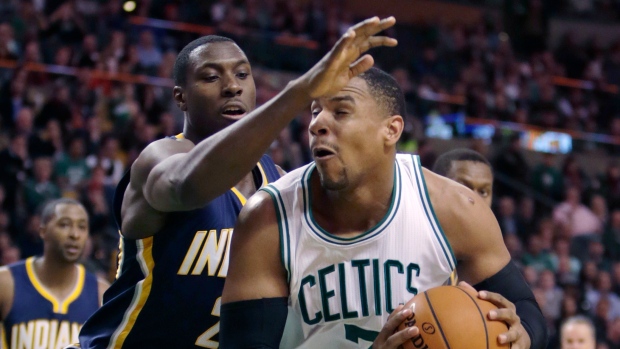 BOSTON - After the Celtics watched promising rookie Marcus Smart go down with a frightening injury, Jeff Green preserved their victory with the biggest rebound of the night.

Boston's lead was down to one when Avery Bradley missed a jumper with about 6 seconds remaining, plenty of time for the short-handed Pacers to take it the other way for a potential game-winner. All that was in Indiana's way was Green, perfectly positioned in the lane to pluck the ball out of the air, draw a foul and sink two free throws that sealed a 101-98 win Friday night.

"That was a great play," Boston coach Brad Stevens said. "He kept his position off of a cut, which allowed him to get the offence rebound."

Green finished with 15 points and seven rebounds, and Jared Sullinger led Boston's fourth-quarter push by scoring 11 of his 17 points in the final period.

It was Boston's first victory since beating Brooklyn in the season opener, but the celebration was tempered by Smart's injury.

Smart was carted to the locker room after crashing to the floor on a hard foul as he drove to the basket with 11:07 left. Smart never got up and his teammates gathered around as medical personnel attended to the injury. Boston fans chanted Smart's name and gave the guard a standing ovation as he was taken off on a gurney with his left leg elevated.

"It was very difficult. You hate to see a teammate go down, especially when he's playing well," Green said. "That game was for him. We had to win it for him."

Stevens said he was waiting on X-rays to see whether Smart sprained his ankle or broke it. After taking the speedy Oklahoma State guard with the sixth overall pick in the draft, the Celtics were collectively hoping it was a sprain.

"You think about how he feels. Your team is clearly affected by it because they care about him, which is a good sign," Stevens said. "And then you have to go play and that's hard."

Kelly Olynyk scored 12 points and Bradley had 11 for Boston.

The Pacers (1-5) dressed only 10 players and used nine of them while losing their fifth straight, matching Indiana's worst start since opening 1-5 in 1996-97.

"In the past we were able to close out games. We've just got to learn how to do that again with a whole new group of people," Hibbert said. "You kind of take that for granted sometimes — to be able to have closers out there. But I believe in this group of guys. We have to turn it around."

Despite the depleted lineup, Indiana rallied from a 13-point deficit in the first half and held a 75-73 lead after three quarters. Boston opened the next period with a 9-2 run and made 10 of its first 14 shots in the fourth, taking the lead for good at 79-77 on Sullinger's jumper.

The Pacers stayed within range down the stretch and had a chance to pull ahead after Rajon Rondo missed a putback attempt with Boston up 97-96. Sloan drove for a layup that missed and Bradley pulled down the rebound with 19 seconds to play.

After a timeout, Bradley missed his jumper but Green was there for the clutch rebound.

Pacers: Indiana has six players out with injuries. C.J. Miles became the latest one when he was scratched before the game because of a migraine. Miles, Rodney Stuckey (sore left foot) and David West (sprained right ankle) were all on the active roster but not available to play.

Celtics: After committing 28 turnovers Wednesday in a loss to Toronto, the Celtics were considerably better at protecting the ball. Boston had no turnovers in the first quarter, three in the first half and 12 in the game.

Boston took a 55-42 lead with 2:50 left in the second quarter, but Indiana closed the half on a 10-0 run and scored the first seven points of the third period to take a 59-57 lead. Indiana led 75-73 entering the fourth, but could not hold off the Celtics down the stretch.

Pacers: At home against Washington on Saturday night.

Celtics: At the Chicago Bulls on Saturday night.