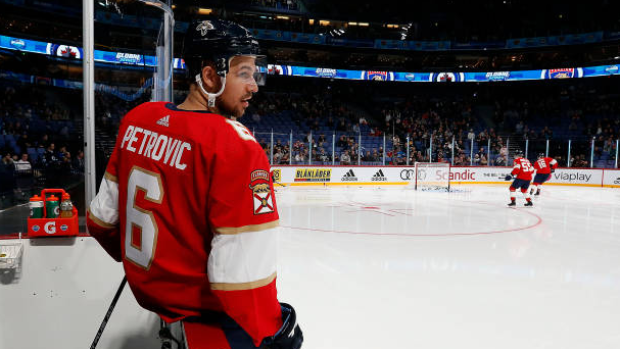 On the surface, there’s nothing particularly interesting about the trades completed by the Edmonton Oilers on Sunday.

Edmonton, in need of a defensive upgrade, sent third-pairing puck-moving defenceman Chris Wideman and a conditional third-round pick to Sunrise for Alex Petrovic. Edmonton followed that up by swapping forward Drake Caggiula and defenceman Jason Garrison to Chicago for defenceman Brandon Manning and defenceman Robin Norell.

Let’s focus on the core defensive pieces in these trades for just a moment. None of Wideman, Petrovic or Manning is having an impressive season. Wideman, who looked like a late-bloomer just a couple of seasons ago, still seems limited by an ugly lower-body injury he suffered in Ottawa. Petrovic, a second-round pick in 2010, hasn’t blossomed into the rock-solid top-four defender the Panthers were looking for. Petrovic has been a frequent guest in the press box lately – he’s been scratched 11 times in the last month and a half on a very average Panthers team, which should tell you all you need to know about Florida’s perception of his game. Manning has been outscored 26 to nine (-2.8 goals per-60 minutes) this season in Chicago, which is the worst number for any defender in the league and the second-worst for any positional player, decimal points behind Ottawa’s Tom Pyatt.

If you look at the percentile ranks for all three of these defenders, you won’t come away impressed. Ultimately that’s what Sunday was about. Reshuffling the deck chairs, so to speak. 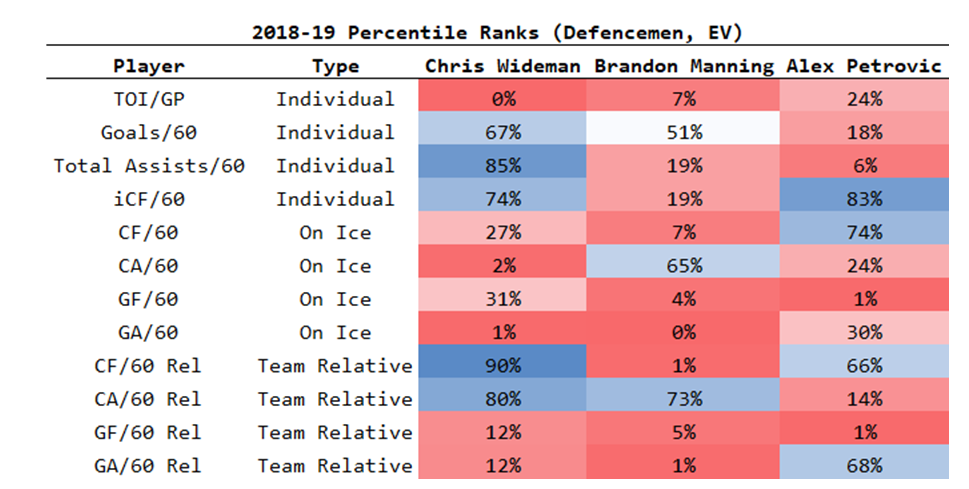 That’s an awful lot of red. Petrovic seems to be the best of the three, but that’s not saying very much. Florida has enjoyed a bit more offence with him on the ice (his most common forward teammate has been Jonathan Huberdeau; his most common defensive partner has been Keith Yandle), but outside of that, the Panthers seem to get rocked when he is on the ice. It’s not any better for the likes of Wideman – who has been nightmarish defensively and obviously a poor fit for a coach like Ken Hitchcock – or Manning.

But what makes these seemingly minor trades interesting is how we ended up here. Let’s put Chicago aside for a moment, as their inclusion in the Sunday deal makes some degree of sense. They moved off of a 28-year-old defenceman for a 24-year-old forward who has shown a lot better this season. Caggiula has at least a shot at carving out a checking-line role for the Blackhawks, and for a team still mired in salary cap hell, it’s a seemingly worthy gamble.

The Oilers take the lead here because, well, it’s not every day you see a team (a) on a five-game losing streak; (b) on the outside of the playoff picture; and (c) already loaded up with third-pairing defencemen make a series of moves to acquire more third-pairing blueliners.

Even if the Oilers rate Manning and Petrovic higher than most, it’s hard to see how it improves the lineup. Neither of these players have statistically shown themselves to be a first-pairing guy by any stretch and, on a good team, they probably soak up depth minutes against weak competition.

Hitchcock’s depth chart on defence now has the aforementioned Manning and Petrovic, along with Darnell Nurse, Adam Larsson, Kevin Gravel, Caleb Jones, Matt Benning, Kris Russell, and Oscar Klefbom. Injuries to Nurse and Klefbom surely hurt, but even with a fully healthy blueline, how many reliable top-four guys do you count? Moreover, does this team have any semblance of a credible first pairing?

For years, the Oilers have failed to repair the state of their blueline. They’ve failed to draft players. They’ve failed to develop players. When they decided that enough was enough, they opted to send MVP forward Taylor Hall to New Jersey for Larsson – a fine NHLer, but not a guy who has moved the needle in any discernible way in Edmonton.

What you are seeing in Edmonton is still a reverberation from that all-in move. The team has recognized, appropriately, that the defence is just not up to par. That’s not exactly the position you want to be in after trading an MVP candidate to make that issue go away.

But it’s not fair to just pick on Edmonton here. Think about Florida’s involvement for a moment. They sent Petrovic to Edmonton. You remember Petrovic, don’t you? The Panthers brass had the option of exposing him and/or Mark Pysyk during the expansion draft. Instead, they chose to create a sideline trade with the Vegas Golden Knights, sending Jonathan Marchessault and Reilly Smith in a package to both protect their defensive corps and clear some cap space. (Florida was not in cap trouble, but was likely dealing with a more aggressive internal budget.)

At any rate, Florida could have chosen to clear cap another way, and they certainly could have made a different decision in what group of players they exposed. But they made a strategic decision to protect Petrovic at the cost of others. In little more than a season Petrovic has gone from top-four fixture, to healthy scratch, to traded for a mid-round draft pick.

Over the last two seasons, Marchessault is 39th in the NHL in rate-scoring (a rounding error behind Florida’s Jonathan Huberdeau, and ahead of names like Washington’s Nicklas Backstrom and Ottawa’s Matt Duchene. Smith, his linemate, is 67th (ahead of Florida stars in Mike Hoffman and Vincent Trocheck).

All this to say: sometimes minor trades are simply minor trades. Other times, they are continuances of poor asset management that create roster penalties for some time. In the case of both Edmonton and Florida, that’s what we are really talking about here.