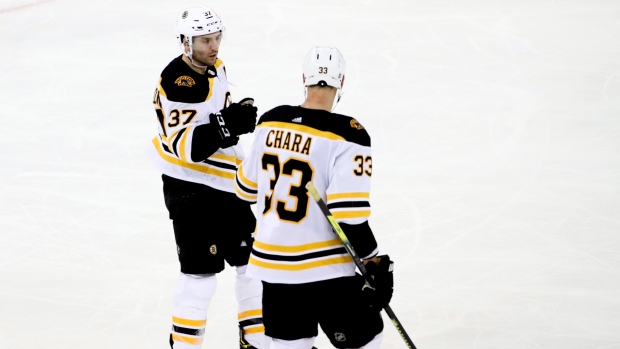 NEW YORK — A loss in the seventh game of the 2019 Stanley Cup Final could have carried over to the following season, except the Boston Bruins’ strong culture has helped them remain at the top of the Eastern Conference standings.

Charlie McAvoy, Charlie Coyle and Patrice Bergeron each scored, and the Bruins began a four-game trip with a 3-1 win over the New York Rangers on Sunday.

“We expect to play well every night," Bruins alternate captain Brad Marchand said. “When we play well, we are going to win a majority of the games. We just hold ourselves to a high standard. We don’t accept losing in the room, or in the organization.”

Jaroslav Halak made 25 saves as Boston picked up its ninth win in 10 games.

Mika Zibanejad scored, but the Rangers’ four-game winning streak was snapped. Alexandar Georgiev made his third start in a row for New York and had 31 saves in his team-leading 26th start.

Coyle scored the winner with a short-handed goal at 18:42 of the second period. The forward stole a puck from Jacob Trouba at the blueline and outskated everyone on the ice before converting a breakaway for his 14th of the season.

“It takes a while to pick yourself up from that,” Bruins coach Bruce Cassidy said. “That was the big boost for us."

McAvoy opened the scoring at 19:18 of the first period after a puck took an odd bounce over Georgiev's head. McAvoy tossed a shot near the net and the puck bounced off two Rangers skaters before finding the back of the net. McAvoy also scored in the Bruins’ 4-1 win against the Detroit Red Wings on Saturday.

“I knew I hadn’t scored, but I wasn’t losing sleep at night,” McAvoy said of his 51-game goal drought to start the season. “It is nice to get a couple in a short amount of time, more importantly we got two wins on this back-to-back.”

Zibanejad ended Halak’s shutout bid with a power-play goal at 9:52 of the third period. Artemi Panarin and Ryan Strome assisted on the play. Bergeron added an empty-net goal in the final minute.

“They are a hard team, they defend very well, they have a ton of experience, they are deep down the middle," Rangers coach David Quinn said of the Bruins. “There is a reason why they have the most points in the league."

The Rangers had an opportunity midway through the second to even the score when David Krejci was penalized for a four-minute high-sticking infraction. The Rangers’ power play has been one of the top units in the NHL, but failed to come through in the middle period.

New York defenceman Ryan Lindgren was forced to leave the game after the Krejci penalty but did return to action after receiving medical treatment.

“We are not going to score all the time but we couldn’t even create any momentum from it,” Zibanejad said of the extended power play. “It wasn’t sharp enough, can’t allow that to happen in an important game like that."

Henrik Lundqvist dressed as the backup goaltender for the seventh straight game and hasn’t started since being pulled against the Dallas Stars on Feb. 3. New York has carried three goaltenders since recalling Igor Shesterkin from the American Hockey League for the second time on January 29th.

NOTES: The Bruins concluded their 10th of 13 sets of back-to-back games this season … Boston is 8-1-1 in the first game of those sets and 5-4-1 in the second half. … Boston scratched defenceman John Moore, forwards Anton Blidh and Par Lindholm. … New York defenceman Tony DeAngelo missed his second straight game with an upper-body injury although Quinn expects him to return Wednesday. … Shesterkin was sidelined for a third straight game because of an ankle injury.