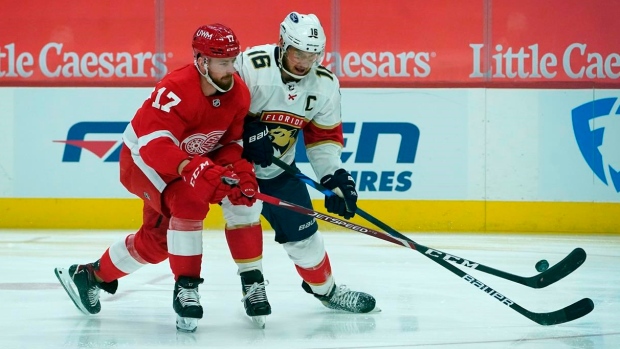 Anthony Mantha scored with 1:48 remaining to pull the Red Wings within a goal after Detroit pulled Thomas Greiss to add an extra skater. Detroit pulled its goaltender again, but couldn't get another shot past Chris Driedger to extend the game.

Hornqvist pulled Florida into a 1-all tie on a power play early in the second. Ekblad took advantage of having an extra skater and with Hornqvist providing a distracting screen when his one-timer from the top of the left circle got past Greiss’ glove with 4:56 left in the second period.

Verhaeghe gave the Panthers a two-goal lead midway through the third, and they ended up needing the cushion when Detroit made a late charge.

Driedger finished with 32 saves for the Panthers, whose only loss this season was in a shootout.

“I think there’s a new vibe around here,” coach Joel Quenneville said. “Getting off to a good start enhances that attitude.”

Greiss stopped 27 shots for the Red Wings, who have dropped six straight.

Dylan Larkin scored to put the Red Wings ahead early in the game with a backhander after skating in front of Driedger on a goal set up by a short, slick pass from Givani Smith. Earlier in the day, Smith was recalled from the taxi squad because forward Tyler Bertuzzi is out indefinitely with an upper-body injury.

“We had a great start, but we didn’t generate enough in the second period and it killed our momentum," Larkin said.

Both teams failed to take advantage of two power plays in the opening period as Detroit outshot Florida 13-6. The Panthers outshot the Red Wings 17-9 in the second period as they took control.

On Saturday night, Florida defeated Detroit 3-2 in overtime when Aleksi Heponiemi scored 2:15 into the extra period in his NHL debut.

Florida is 5-0-1, losing in a shootout Thursday night at Columbus, and its six-game, season-opening point streak is the second longest in franchise history. The 1996-97 team opened the season with a 12-game point streak.

“It feels like a fresh start for me and all of the guys in the room and we’re only going to get better,” Florida captain Aleksander Barkov said.

Detroit has lost six in a row after a 2-2 start, which briefly generated some optimism about a team that was easily the NHL's worst last season.

Larkin’s goal gave him six points in seven games. He has provided desperately needed scoring for an offensively challenged team that was without Bertuzzi, who leads the team with five goals.

Larkin, the team's captain, has been playing through an undisclosed injury since he was hurt last week against Dallas.

“I feel like I can still help us win, so I’m going to be out there," he said. “If that changes, I’ll have to make a decision."

Florida's Jonathan Huberdeau and Keith Yandle each had an assist on Ekblad's and Hornqvist's goals.

The Red Wings were without Adam Erne, Robby Fabbri, Sam Gagner, Jon Merrill and Filip Zadina due to the NHL's COVID-19 protocols, while Florida didn't have anyone on the league's list.

“I don’t know the exact dates, but we should have most of them available for Wednesday," Detroit coach Jeff Blashill said.

Florida returns home for a relative break before hosting Nashville on Thursday night, the start of a six-game, 10-day homestand that also includes games against Detroit and Tampa Bay.

The Red Wings play the Lighting on the road Wednesday night.

“This is going to be a great challenge on Wednesday against the Stanley Cup champions, but we sat for 11 months," Blashill said. “We’re excited about these challenges.”