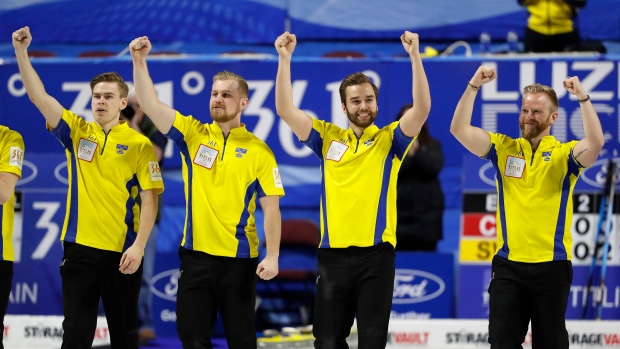 "I guess the only positive thing to look at is that even if we had played a great game, they probably still would have won with how well they played. They were certainly the best team today."

Edin's third career world title is Sweden's eighth in the 60-year history of the tournament.

"We have a couple guys who haven't won the world championship, so it's amazing for our team to really be on top, after the Olympic loss, especially, and losing the world final last year as well," Edin said.

"They were way better than us last year, but I think this year, it was our turn."

They lost 10-7 to John Shuster of the U.S. in the Olympic final.

But with the 86-year-old Richardson and former Canadian Prime Minister Stephen Harper watching at the Orleans Arena, Gushue trailed 5-0 after five ends against a Swedish team that excels at defence.

Edin's strength is big-weight takeouts and forcing the opposition to take a single point in ends in which he doesn't have last-rock advantage.

The Swedes had hammer to start the final. After blanking two ends, they scored two in the third and stole three points in the next two ends to lead 5-0.

Gushue was light on a draw to the four-foot rings in the fourth end to give up a pivotal steal of two.

His attempted runback double takeout in the fifth to score two missed Sweden's shot stone to give up another steal.

The Swedes didn't open the door for Canada to get back into the game with their granite-clearing hits.

Gushue's tournament was more stressful than a year ago in Edmonton, where Canada went undefeated en route to the world title.

The four men were also in a confident, relaxed zone last month in Regina where they lost only one game en route to a second straight Canadian title.

In Las Vegas, Gushue struggled with reads of ice that he felt was often different from one day to the next. Each member of the team took their turn having an off game requiring his teammates to prop him up.

Nichols played through the grief of his mother's recent death just prior to the tournament. His shooting percentage of 87 was the best among thirds in the preliminary round.

Helen Nichols died a week before the tournament began at the age of 63.

The Orleans hotel and arena complex is situated west of the strip. All curlers, fans, officials and volunteers were together all the time at the hotel, arena and pool.

There wasn't enough of a mental break from the event between draws for Gushue's comfort.

But the skip said he eventually came around to embracing what he couldn't control and accepting his team could win without playing what he called "a real clean game."

"I think with how we played this week, and struggled through with everything that happened leading up to it, it's still positive," Gushue said. "Certainly disappointed because we came here to win, but Niklas and his team were certainly deserving.

"At the end of the day, second in the world is pretty good, but it's a little short of what we were hoping for."

Gushue will return to the 2019 Tim Hortons Brier in Brandon, Man., as Team Canada. The 2019 men's world curling championship will be in Lethbridge, Alta.

Canada was shut out of team curling medals at the Olympic Games for the first time in Pyeongchang.

But Canada will face more challengers in the future.

The Asian countries are coming in curling. With South Korea just hosting a Winter Olympics and China the next host country, those countries and Japan are putting more resources into the sports and their teams.

The American men winning Olympic gold sparked an increased interest in the sport in the United States, which could reap more podium results in the future.