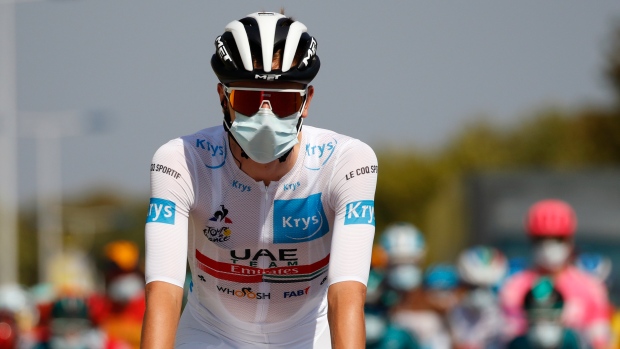 LA PLANCHE DES BELLES FILLES, France — In an incredible climax to the Tour de France, Tadej Pogacar crushed fellow Slovenian Primoz Roglic in the last stage Saturday before the finish in Paris, all but guaranteeing that he'll win the title at cycling's greatest race.

Set, at one day shy of 22, to become the youngest post-World War II champion, Pogacar flew on the penultimate stage, an uphill time trial, devouring the 57-second lead that had made Roglic look impregnable before the showdown.

In the end, it wasn't even close. Pogacar was sensational, not only ripping the iconic race leader's yellow jersey from Roglic, but winning the time trial, too. Roglic managed no better than fifth, a whopping 1 minute, 56 seconds slower than his countryman.

Not since British riders Bradley Wiggins and Chris Froome finished 1-2 at the 2012 Tour has one nation taken the top two spots.

But almost everyone — even Pogacar — had been expecting that Roglic would be rolling into Paris with the yellow jersey on his shoulders, on his way to becoming Slovenia's first ever winner. Roglic had taken the race lead on Stage 9 and held it all the way to Saturday, the worst day to lose it. He now trails Pogacar by 59 seconds.

"I cannot believe how hard it must be for him," Pogacar said. “He must be devastated. But that’s bike racing.”

Only a major mishap Sunday — highly unlikely — on what is traditionally a leisurely and ceremonial ride into Paris before the final sprint to the line will prevent Pogacar from taking over from 2019 winner Egan Bernal, who was 22, as the youngest post-war champion.

“I can't wait to cross the line in Paris,” Pogacar said.

Australian Richie Porte will complete the podium, having ridden his way from fourth to third overall in the time trial to the Planches des Belles Filles ski station in eastern France.

Canada's Hugo Houle, a support rider for the Astana Pro Team, was 122nd in the stage and 46th in the general rankings. The 29-year-old from Sainte-Perpetue, Que., finished 91st in last year's Tour.