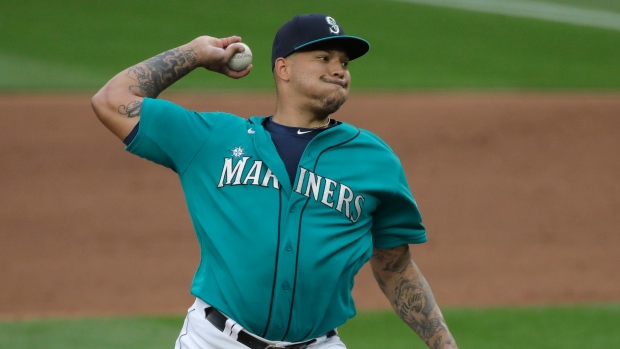 SEATTLE — After seeing most of the last two seasons wiped out by Tommy John surgery, Taijuan Walker was more than ready to experience the feeling of a victory again.

He did so after one of the more impressive outings in his entire career.

Walker (1-1) was dominant making his first start in Seattle since the end of the 2016 season before being traded to Arizona. Walker struck out eight and walked two. The lone hit was Ramon Laureano’s double leading off the fourth inning, but he was stranded at third after Walker made a good defensive play to snag Mark Canha’s comebacker for the final out of the inning.

Walker’s best inning came when he struck out the side in the fifth after he was given a 2-0 lead. It was Walker’s first win since Sept. 6, 2017, against the Dodgers while pitching for Arizona, before elbow trouble and surgery limited him to four combined starts over the past two seasons.

It was the third time in Walker's career he pitched at least six innings and allowed one hit. The previous two came during the 2015 season.

“We were probably not swinging at our best at this point, but he pitched a pretty good game and mixed his pitches pretty well,” Oakland manager Bob Melvin said. “His first game, didn’t look sharp; this game he looked like sharp right away and we certainly couldn’t solve him.”

Reliever Bryan Shaw stumbled in the eighth giving up a two-run triple to Marcus Semien and Laureano’s sacrifice fly. That was all Oakland would get as Taylor Williams pitched the ninth for his second save.

While Walker was overpowering on the mound, Lewis continued to rack up hits at the plate. Lewis singled and scored from first base on Kyle Seager’s two-run double in the fourth inning. In the fifth, Lewis lined an RBI single to centre to score J.P. Crawford.

Lewis has 15 hits in the first eight games.

“Consistency is an understatement on what Kyle Lewis has been able to do. ... With (Seager) it’s a great combination in the middle of our lineup,” Seattle manager Scott Servais said.

Oakland starter Sean Manaea lasted just 4 1/3 innings, giving up six hits and five runs, but only three were earned. Manaea (0-2) set down the first nine batters in order, but ran into trouble in the fourth and was lifted an inning later after Crawford’s second single.

Players from both teams all stood along the foul lines during the national anthem. Once the anthem ended a message of social justice and equality from The Players Alliance played in the stadium, Oakland’s Marcus Semien, Seattle coach Joe Thurston and eight of the Mariners Black players — Lewis, Crawford, Carl Edwards Jr., Dee Gordon, Shed Long Jr., Justin Dunn, Justus Sheffield and Mallex Smith — all took a knee as the video was played.

“As a group we wanted to show unity for The Players Alliance and sticking together,” Lewis said.

Because of his past history in Seattle, a normal trip to play the Mariners means A’s manager Bob Melvin likes to get out and see the city or catch up with old friends.

That wasn’t the case as the A’s embarked on their first road trip of the season with the focus on being smart, safe and healthy. Oakland had not left the Bay Area since Summer Camp began.

“I think guys are just more, ‘Hey look, we just need to stay in, stay in our rooms, go to the ballpark,’” Melvin said. “We had an off day yesterday, I know I didn’t go anywhere.”

Mariners: LHP Yusei Kikuchi (0-0, 12.27) makes his second start. Kikuchi allowed five runs in 3 2/3 innings in his first outing against Houston. Kikuchi was strong early, but gave up four runs and was knocked out in the fourth inning by the Astros.