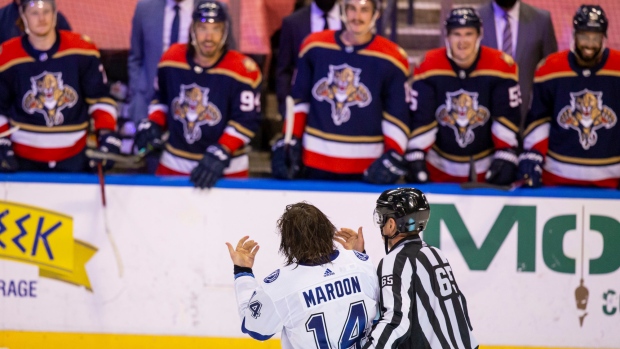 The bad blood that spilled over in Game 5 between the Tampa Bay Lightning and Florida Panthers has led to fines against a pair of Bolts players.

The NHL Department of Player Safety announced fines on Tuesday for forward Patrick Maroon and defenceman Ryan McDonagh in the wake of the Panthers' 4-1 to stave off elimination.

Tampa Bay’s Pat Maroon has been fined $3,879.31 the maximum allowable under the CBA, for unsportsmanlike conduct, for his actions at the end of last night’s game against Florida.

Maroon, 33, was fined $3,879.31, the maximum amount allowable under the CBA, for unsportsmanlike conduct. He was assessed with a 10-minute misconduct and a two-minute minor for a cross-check to Noel Acciari with 11 seconds remaining in the third period. Maroon had been suspended for one game near the end of the regular season for unsportsmanlike conduct due to his actions in a game against the Panthers. During this series, Maroon has racked up 26 minutes in penalties.

Tampa Bay’s Ryan McDonagh has been fined $5,000, the maximum allowable under the CBA, for Cross-checking Florida’s Mason Marchment.

McDonagh, 31, received a $5,000 fine, also the maximum allowable under the CBA, for a cross-check to Panthers forward Mason Marchment during the first period. He was assessed a two-minute minor on the play. Over the five games of this series thus far, McDonagh has four assists and averaged 21:44 of ice time a night.

Game 6 between the two teams is set for Wednesday night with the Lightning holding a 3-2 edge.