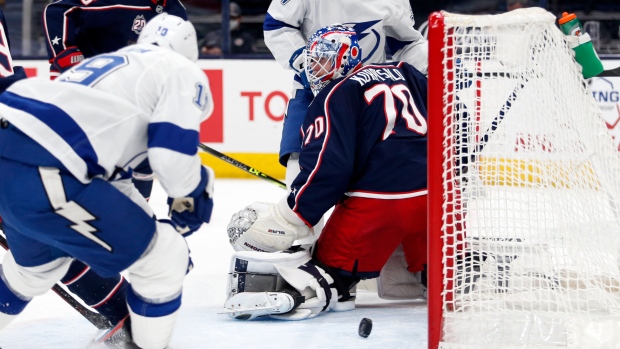 COLUMBUS, Ohio — Tampa Bay scored three times in the first six minutes of the game, Andrei Vasilevskiy made 32 saves and the Lightning beat the Columbus Blue Jackets 6-4 on Thursday night.

Blake Coleman roofed a shot 58 seconds in, and then Steven Stamkos and Barclay Goodrow scored a minute apart to put the Blue Jackets in an early hole.

Ryan McDonagh scored twice, and Ross Colton also had a goal as the Lightning stopped a three-game skid and earned a split of the two-game series with Columbus as they duel the Florida Panthers and Carolina Hurricanes for supremacy in the Central Division. Yanni Gourde had four assists, and Goodrow added two assists.

“I like the way we started,” McDonagh said. “It was good energy and good forechecking and good play coming out of the zone. That allows us to get to the offensive zone and make things happen.”

Jack Roslovic had a goal and an assist, and Michael Del Zotto, Zach Werenski and Max Domi also scored for the Blue Jackets, who have dropped eight of the last 10 games. Joonas Korpisalo stopped three of the Lightning's first six shots before being benched for Elvis Merzlikins, who made 21 saves the rest of the way.

Goodrow's goal, which went in off the skate of Blue Jackets forward Patrik Laine, chased Korpisalo just 5:41 into the game.

“It’s not as if we weren’t ready,” Werenski said. “Obviously, we knew they’ve lost a few games and would come out hard, but when you start like that it’s tough to recover from.”

Del Zotto cut to the lead to two goals when he snapped in a shot from the slot late in the first, but the Lightning extended it again when a puck off the stick of McDonagh trickled under Merzlikins and across the line.

Colton kept up the pressure for the Lightning on a rush early in the second period. A charging Roslovic scored for the Blue Jackets late in the second, but McDonagh answered 1:48 later with his second goal.

“The guys, they had good mojo going tonight on the offensive side of the puck,” Tampa Bay coach Jon Cooper said. “It was a little relief for the guys. Now we’ve just got to keep this going.”

Werenski and Domi got third-period goals, but the Blue Jackets ran out of time.

Longtime Blue Jackets defenceman David Savard was a healthy scratch for the game, likely signalling the team’s intention to trade him before Monday’s deadline. The 30-year-old Savard, who is an unrestricted free agent after the season, has been with Columbus since the 2011-12 season and has played 597 games with the team.

After Stefan Matteau levelled the Lightning’s Mikhail Sergachev with a monster hit in the third period, Cal Foote jumped the Blue Jackets rookie and the two brawled briefly. Matteau and Foote went to the penalty box for the fight, and Foote got an extra two minutes for instigating.

Stamkos’ power-play goal was his 10th of the season. The Blue Jackets as a team have scored just 14 times with the man advantage. ... Colton has six goals and nine points in his first 14 NHL games. ... Tampa Bay defenceman Erik Cernak returned to the lineup after missing seven games with a lower-body injury. Luke Schenn was scratched to make room. ... Columbus centre Boone Jenner is expected to miss the rest of the season after he had surgery Wednesday on a broken finger.

Lightning: Start a two-game series with Nashville on Saturday before heading home for a six-game stand.

Blue Jackets: Open a two-game series with Chicago on Saturday before embarking on a six-game road trip