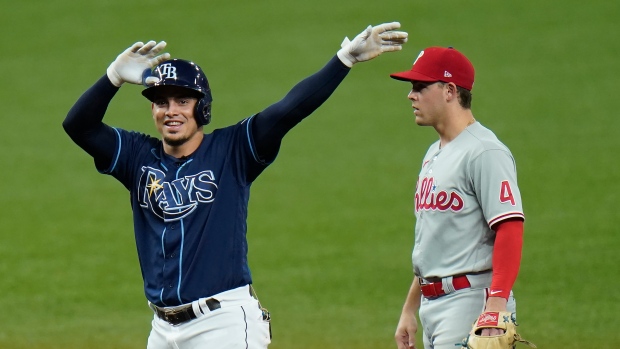 Andrew McCutchen had four hits for Philadelphia, which has lost six of seven. But the Phillies avoided elimination from the playoff race when San Francisco lost to San Diego 6-2 later. Heading into the final day of the regular season, the Phillies need a win over the Rays and losses by the Giants and Brewers to grab the final NL wild card.

McCutchen sat alone in the dugout for an extended period after the loss.

“It's frustrating because you see the team that you have around you and you know we should be there, we should easily be there,” McCutchen said. “To be on the outside looking in right now, it can be frustrating at times.”

Tampa Bay clinched the No. 1 seed in the AL about 30 minutes before game time, when Oakland lost 5-1 to Seattle in the first game of a doubleheader.

“It's awesome, it's exciting,” Rays manager Kevin Cash said. “Happy for the guys. Just another step for the guys to appreciate what they accomplished this season.”

The Rays have an AL-best 20 come-from-behind wins this season. The Phillies have lost a major league-leading 21 games after holding a lead.

“It felt great to see some guys rattle off some hits and some tough at-bats up there off a very good arm,” Lowe said.

Wheeler gave up four runs and seven hits over seven-plus innings, and had his streak of starting the season with 10 starts of at least 5 2/3 innings and three or fewer runs end. Only Curt Schilling, who began the 1998 season with 11 straight, had a longer run for the Phillies since 1900.

Bryce Harper had a run-scoring single in the seventh that got the Phillies within 4-3.

McCutchen put the Phillies up 2-1 on a solo shot during the fifth off reliever Pete Fairbanks (6-3).

Aaron Slegers went the final three innings and earned his second save.

McCutchen appeared to have a leadoff triple in the third, but was sent back to second after a video review determined the ball got stuck under the centre field fence. It eventually cost Philadelphia a run when McCutchen was thrown out at the plate by centre field Kevin Kiermaier on a two-out single by J.T. Realmuto.

“What a play, my gosh,” Cash said of Kiermaier's throw.

Rays opener John Curtiss allowed a run and three hits in two-thirds of an inning. He became the eighth pitcher since saves became an official stat in 1969 to record a save and then start the team’s next game.

Philadelphia rookie Alec Bohm went 2 for 5 and has a hit in 17 of his last 19 games, including 11 multi-hit games. He has 39 hits this month.

Cash made it official that LHP Blake Snell will start Game 1 on Tuesday in a first-round playoff series. RHPs Tyler Glasnow and RHP Charlie Morton round out the rotation.

Phillies: Harper (back) was the DH for the third straight game. ... Realmuto (left hip flexor) started at catcher after playing first base in the previous two games. ... 1B Rhys Hoskins (left elbow strain) could take batting practice Sunday.