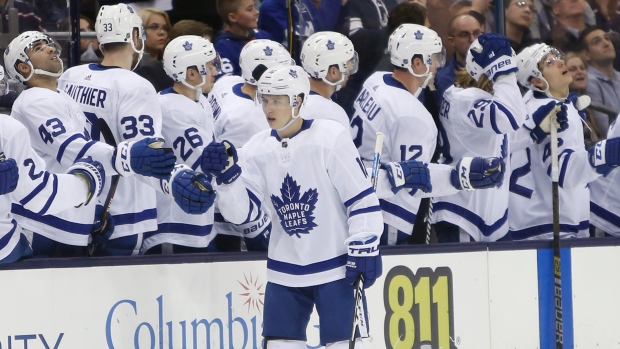 COLUMBUS, Ohio — The Toronto Maple Leafs looked like a well-rested team coming off a five-day holiday break. They were fast and opportunistic in handling the Columbus Blue Jackets, who were playing the second night of a back-to-back.

"Sometimes after a few days you can feel a little flat, just out of rhythm and just timing and everything, so I thought overall we played a pretty solid game," Tavares said. "Sparky was solid and made some big saves when we needed him to, our penalty kill, I thought, was really sharp, so it was good to start the way we did and build on it and not give them a whole lot."

Tavares' two first-period goals nicely set up a return to Toronto on Saturday, when he will face his former team, the New York Islanders. He played there for nine seasons before joining his hometown Maple Leafs in a seven-year, $77 million deal last summer.

Tavares' linemate, Mitch Marner, had a goal and assisted on both his tallies, and Frederik Gauthier also scored to power the Maple Leafs to their fifth straight win, matching the longest streak of the season. They are a distant second to Tampa Bay in the Atlantic Division.

Nick Foligno and Artemi Panarin scored for Columbus, and Sergei Bobrovsky had 25 saves. The Blue Jackets, playing on consecutive nights, saw their five-game winning streak snapped as they try to stay close to Washington at the top of the Metropolitan Division.

"We had some zone time, generated some chances, their goalie played well," Tortorella said. "Give him some credit. But some of our chances, especially from our back end, were shot wide."

Toronto took advantage of a power play early in the game when a shot by Nazem Kadri from slot was deflected in off Tavares' skate . Foligno tied it up shortly afterward when he snapped a shot between Sparks' pads from the right circle.

Tavares second goal in the first period didn't require puck luck. He rifled a shot from the left circle that went top shelf over Bobrovsky's glove and gave Toronto a 2-1 lead.

Marner gave Toronto a two-goal lead halfway through the second on a 4-on-4, when he raced ahead of Pierre Luc-Dubois on a rush, took a beautiful pass from Auston Matthews and swept it past Bobrovsky.

Late in the third, Par Lindholm shovelled the puck out from the back of the net to set up a finish by Gauthier . Panarin got his 100th NHL goal with 1:28 left in the game.

Columbus came up empty on a pair of power plays and has scored just once in 33 attempts with a man-advantage in the last 11 games.

NOTES: Tavares' 26 goals lead the team. He has seven goals and four assists in his last six games. ... Toronto D Igor Ozhiganov returned after missing three games because of an illness. Justin Holl was a healthy scratch to make room. ... Toronto F Patrick Marleau played in his 1,613th NHL game, giving him sole possession of 10th place on the all-time list. ... With an assist on Foligno's goal, Seth Jones has 13 points in the last 15 games.