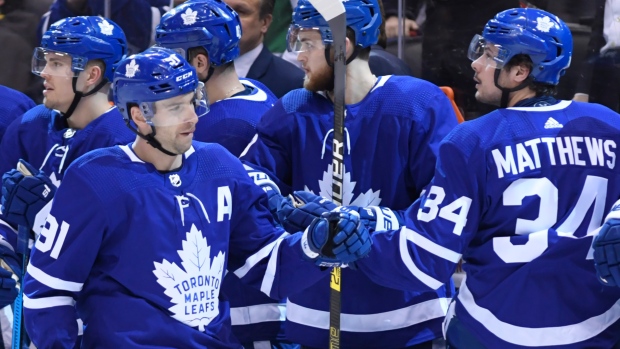 TORONTO – The Maple Leafs haven’t designated a captain in more than three years, but with a new season looming, John Tavares sees plenty of qualified candidates among his teammates.

“I think Morgan [Rielly] being here for as long as he has and his maturity level, you can see it in his game and how he carries himself off the ice, very level-headed,” Tavares said after the Leafs’ informal skate at Ford Performance Centre on Monday.

“Obviously Auston [Matthews’] presence, his talent, his ability, his drive to be one of the best players in this league is incredible. A guy like Mitch [Marner] has an incredible energy about him, just brings the room to life and the way he impacts the game in so many different areas and the way he plays it is so unique.”

Tavares is also in the mix for the Leafs’ captaincy, and unlike almost anyone else in Toronto’s dressing room, he has on-the-job experience.

Prior to signing a blockbuster seven-year, $77 million free agent contract with the Leafs last July 1, Tavares spent nine seasons with the New York Islanders, including five as the team’s captain.

The Leafs have been relying on a collection of alternate captains – Tavares was one last year – to comprise its leadership group since their last captain, Dion Phaneuf, was traded to Ottawa in February 2016. But while the demands of a captaincy in Toronto may be greater than they were on Long Island, the idea of filling Phaneuf’s vacated spot is hardly intimidating to Tavares.

“If I had that opportunity, I wouldn’t look at it [as more pressure],” Tavares said. “You just don’t take something like that for granted. There’s only so many [captains] in the league and certainly for a franchise here like the Maple Leafs, with [its] history and tradition [is special]. I don’t want to look at things differently just because you’re given a responsibility.”

Tavares readily accepted his role as an alternate last fall (along with Rielly, Patrick Marleau and Ron Hainsey), and discovered a happy balance of players willing to step up to take the lead in his new team’s dressing room as he put together a career-best 47-goal, 88-point effort on the ice.

Even if a team captain were to be named outright this fall, Tavares is adamant the Leafs shouldn’t abandon their leadership-by-committee approach all together.

“No question [the captaincy] would be a very special honour,” Tavares said. “[But] I know from my time of being a captain, you realize how important the people are around you. You don’t have all the answers, and [need] to lean on your teammates. When you have so many great players, great people, guys that are leaders…you can lean on everyone else to lift you up and help you when things aren’t going well.”

That multiple Leafs could be capable of handling the captaincy is part of what’s made general manager Kyle Dubas so patient in bestowing the letter. After being promoted into the GM role last May, Dubas used the entire next season to get to know players from a new vantage point and assess the team dynamics.

Dubas told TSN Hockey Insider Bob McKenzie last week that he is “a lot more close to saying yes” to naming the franchise’s 19th captain, and revealed what he’s looking for in that person.

“I think [we need] somebody who is calm and stoic and ready at all times,” Dubas said. “We’ve got some great candidates in there and I think that’s the second part of it. Once accepting that you do want to have a captain, we’re fortunate that we have a few players that can fill that void and then it’s trying to determine what’s best for the future of those players and for the group.”

Calm and stoic are attributes easily attributed to Tavares, and also to Rielly, who has served as an alternate captain for three seasons. With training camp now set to open for Toronto on Thursday, an announcement on whether either of them, or someone else, has finally won Dubas over and captured the captaincy could be forthcoming.

“Whatever happens, I know we’re going to have a great [captain] whoever it is,” Tavares said. “And we all want to support whoever it is and go out there as a group and have success as a team.  …[There’s] no question, being a Maple Leaf and the history and what it means, the tradition, the connection to the fan base, the city, it’s a big deal.”