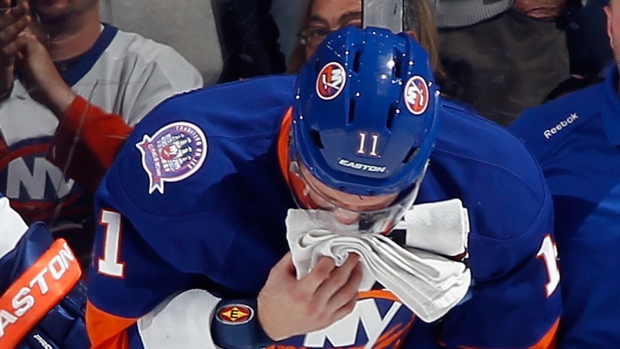 "We can also hit guys like that," Tavares said Wednesday, a day after Visnovsky was hurt and did not return during a 2-1 overtime loss in Game 4 of the first-round playoff series.

Tavares took exception to how Capitals forward Tom Wilson lined up Visnovsky before delivering the blow.

"The puck wasn't even close to where 'Lubo' was," Tavares said. "It was a complete targeting of a defenceless player."

Visnovsky's status is uncertain with the series tied at 2 and shifting to Washington for Game 5 on Thursday night.

Coach Jack Capuano met with Visnovsky at the Islanders arena before an optional practice Wednesday, but wasn't certain if the player would travel with the team.

Visnovsky, who has a history of concussions, was hurt six minutes into the second period after playing the puck in the right corner of the Islanders zone. Wilson, who had his centring pass blocked, was already driving up the right boards and took a few extra steps before lowering his shoulder and catching Visnovsky square in the face.

Visnovsky lay on the ice for several minutes and was wobbly while getting up before skating off. He was also cut on the cheek.

Wilson was issued a minor penalty for charging. The NHL has the option to review the play and issue further disciplinary action.

The 6-foot-4 Wilson called his check clean, and noted he has the edge in size over the 5-foot-10 Visnovsky.

"I'm trying to make sure I'm doing everything as clean as possible — staying on my feet and kind of finishing hard and low through the guy's body. He's a littler guy," Wilson said, following practice in Arlington, Virginia. "I don't think it was a charge. I was gliding for most of the time after my shot or my pass. Yeah, it was a big hit. Hopefully, he's feeling better and we'll leave it at that."

"It was a hard, clean hit," Trotz said. "Tom Wilson didn't do anything other than run him over."

"It's a quote unquote good penalty to take," Laich said. "We kill the penalty off. We get momentum, And now we can really start to lean on their defence corps with only five guys left."

Visnovsky is a 14-year NHL veteran, who had five goals and 15 assists in 53 games during the regular season.

The Capitals are already minus defenceman Travis Hamonic, who has been out since sustaining a lower body injury in the second-last game of the regular season. Capuano had no update as to when Hamonic can return.

"It's a big challenge," Capuano said about the possibility of being down another defenceman. "They're big holes to fill. Who are we kidding?"

Matt Donovan and rookie Griffin Reinhart are candidates to step in.