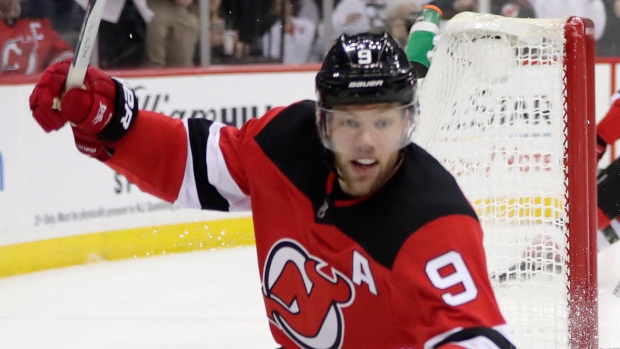 New Jersey Devils forward Taylor Hall was scratched from the lineup before taking on the Colorado Avalanche on Friday night.

NEWS: The #NJDevils are holding Taylor Hall (precautionary) out of tonight’s game at Colorado.

According to the team, Hall is being held out of the lineup as a "precaution." Hall did take part in the warm-ups prior to the game.

According to the NHL roster sheet, Taylor Hall is scratched tonight for the Devils. He was out there in warmups and is on the lineup sheet, so standby for more...

TSN Hockey Insider Pierre LeBrun says there is some traction in trade talks that the Devils are having with some teams so the risk is not worth playing him at the moment.

I’m told Taylor Hall has not been dealt at this point, however, there is some traction in trade talks the Devils are having with teams and so the risk is not worth playing him play at the moment. Stay tuned. https://t.co/i3273tPiDX

My sense is there are at least a half dozen teams who have shown considerable interest in Hall and NJ is obviously getting traction with one or more — hence Hall being pulled from tonight’s game for precautionary reasons — but that doesn’t mean a deal is minutes or hours away.

I’m not saying Hall will end up in ARI, but I would say Coyotes appear to be one of the teams with notable interest in him and likely have the motivation/wherewithal to perhaps get it done. Though I suspect they are not alone on those counts. On that note, I’m going to bed.* **

Hall has six goals and 25 points in 30 games with the Devils this season and is the subject of increasing trade speculation. He was limited to 33 games last season due to a knee injury, posting 11 goals and 37 points.

The 28-year-old won the Hart Trophy in 2018 after scoring a career-high 39 goals and 93 points in 76 games and leading the Devils to a playoff berth. He posted 41 points more than the team’s next leading scorer that season.

A pending unrestricted free agent, Hall carries a $6 million cap hit in the final season of a seven-year deal signed with the Edmonton Oilers in 2012.

The Avalanche beat the Devils 3-1 on Friday night, dropping New Jersey's record to 9-17-5.