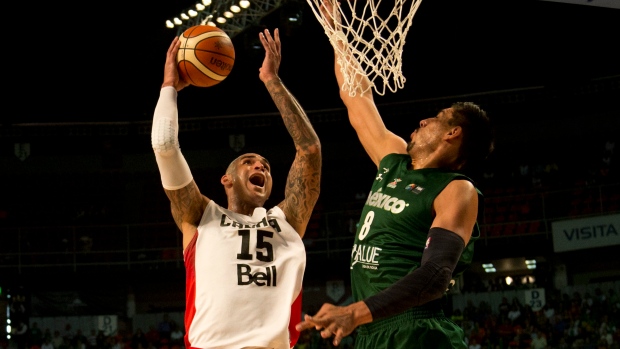 MEXICO CITY - Just about 24 hours later Team Canada was still coming to terms with one of the most heartbreaking defeats in program history and, to make matters worse, they still had a meaningless bronze medal game to play.

After finishing the preliminary rounds as the FIBA Americas' top seed, believed by many to be the tournament favourites, the Canadians shocked everybody - themselves included - by laying an egg in Friday's 79-78 loss to fourth-place Venezuela, an embarrassing upset that ultimately cost them a spot in the Olympics, for now.

With one last opportunity to qualify for Rio next summer and a bright future ahead of them, unchanged by their 2015 flameout, there's obvious light at the end of the tunnel, but it may be too soon for Canada's players to see it that way.

"It was a tough night, we're in one of the stages of grieving," general manager Steve Nash said, speaking with the media Saturday evening, ahead of their final game, an 87-86 victory over Mexico to win bronze.

"They're still hurting for sure and they're going to hurt for a while, until they get a chance to right it next summer. But at the same time I think they understand that this is a process. I think that they see what happened to them a little bit and that they weren't themselves. I think it's something they're well aware of and they're smart enough guys and they've been through enough to know that they were in a strange spot last night, it wasn't a natural thing for them and you need to go through this. There's no cheating experience, there just isn't, it's unfortunate but there isn't."

They'll finish the FIBA Americas with a record of 8-2, one of those losses coming in the only game that really mattered. Despite their resounding success during the round robin, winning seven straight games by an average margin of 28 points, Nash's team was overwhelmed by the pressure of a must-win, scenario, the likes of which many of their young stars had never experienced. For all their talent, their oldest player is just 29, their oldest starter is 24. They're infants in terms of the international game and it showed in this tournament's most crucial moment.

"We were the favourite in the tournament. We finished with the number one seed. And we'd never been in that situation. That's natural. We all thought we were past it by beating Mexico in their own country, but the truth is it's a really natural process for a young team like that that's never had these types of collective experiences to face these types of situations and disappointments."

With that in mind, and almost nothing to play for other than pride, Canada went all out in Saturday's consolation game. Although Nik Stauskas and Anthony Bennett sat out with illnesses, Andrew Wiggins played 36 minutes - a tournament-high for him and 10 more than he logged in the semi-final - while Cory Joseph played 31 and hit a game-winning jump shot at the buzzer.

"This game won't make up for it," said Wiggins, who called Friday's loss the worst of his young career. "We're a day late in how we played today. It's hard. It hurts. Everyone on the team is still hurting but we have another chance [to qualify for the Olympics] and we have to prepared for it."

"It was tough to digest," Joseph echoed. "I watched the last minute [of Friday's loss], I watched some of the game I was thinking about the game all night. To me, I try to look at the positives. The team as a whole, I felt like it was very, very positive for Canada basketball. There is no other place I would rather be right now but with this team. I love those guys, I felt like we made a step in the right direction and to come back today and get the W in a battle like this, it shows the character we have and the kind character guys we have on this team."

Lost in all the recent excitement around Canada Basketball and their early-tournament success is the fact that this was their first opportunity to play together as a collective unit. Canada will be one of 18 teams competing in three separate tournaments next July, with the winner of each headed to Rio. The hope is that they'll continue to gel and learn from this experience, while also adding future cornerstones Tristan Thompson, Tyler Ennis and Jamal Murray into the mix.

"We didn't get the result that we wanted but at the same time, it was a pretty successful summer," head coach Jay Triano said. "To go 16-3 and to win two medals (silver at the Pan American Games and bronze at FIBA Americas) in one summer as the senior national team hasn't been done before."

"We're going to take that as a positive and we're going to look at next summer as a challenge for us. We're going to play exhibition games that are going to determine whether we go to the Olympics or not and that'll make our guys get together more. I think the more that we're together, the better we're going to be.  We're the youngest team in this tournament and we've got a lot of growing up to do and I think we took a big step this summer."