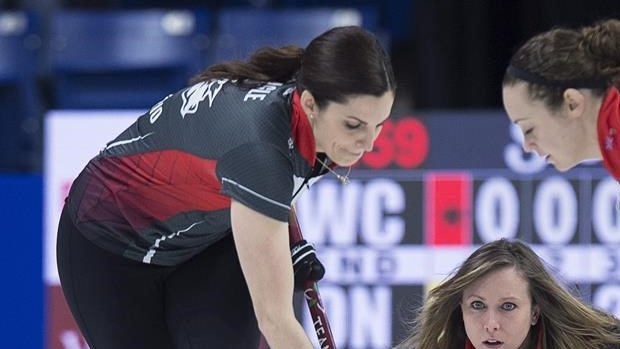 Lisa Weagle wasn't sure what might be next for her after getting the unexpected news last week that she was no longer a part of Team Rachel Homan.

The all-star lead turned to family and friends for support and eventually she had discussions about future plans. Weagle, a top free agent, wanted to keep her options open.

Competitive curling was still appealing but had to be the right fit. Coaching was also a possibility, as was a return to communications work.

"The last week has been tough and it really put my values and priorities into focus," Weagle said. "I use that to guide my decision-making. I knew in my heart that I still really wanted to play."

When Jennifer Jones reached out last Sunday to discuss the idea of creating a five-player team, it got Weagle's attention. Jones's teammates — third Kaitlyn Lawes, second Jocelyn Peterman and lead Dawn McEwen — soon joined them for a video call and it wasn't long before Weagle was officially on board.

"We were on the call with Lisa and I don't think any of us stopped smiling," Jones said.

Jones and Weagle confirmed the news to The Canadian Press on Wednesday morning. A team announcement was made shortly thereafter.

The unusual move was the latest in a series of high-profile roster changes on the domestic curling scene. The off-season essentially started last week as the bulk of the 2019-20 curling calendar was cancelled due to the COVID-19 pandemic.

Some teams wasted little time finalizing lineup moves with the 2021 Olympic Trials just over a year and a half away.

"This is a really established team with such an amazing competitive resume," Weagle said from Ottawa. "I knew that if I was going to play, I wanted it to be for a team that had the potential to win. I want to win another Scotties and I want to win the Trials and go back to the Olympics.

"I'm not afraid to say that and neither is Jen. That was a big part of my decision."

All five players on the Winnipeg-based team have impressive resumes. Jones, 45, became an Olympic champion in 2014 and has won six national titles and two world titles.

Weagle, 34, a three-time national champion, won a world title in 2017 and represented Canada at the 2018 Winter Games.

"We've had this energy about our team heading into the next two seasons but I feel like now we're even more energized and I didn't even know that was possible until it was happening," Jones said. "She's going to add a new perspective and a new set of eyes and that's never a bad thing in my opinion."

Logistics on how five full-time athletes will play on a four-player team will be sorted out in the off-season, both players said. McEwen, like Weagle, is also considered one of the best leads in the game.

Many curling teams use a fifth player as an alternate through the season and particularly at significant events. The fifth rarely sees ice time but is available in the event of underperformance or injury.

Team Jones is planning to have all five players train together and be on hand at most competitions.

The five-player option was something the team had been considering over the last couple weeks, Jones said when reached at her home near Barrie, Ont.

"We weren't sure if we were going to add somebody this season or not because we were trying to figure out who that might be," she said. "Then Lisa became available and it just filled all the check marks on our list.

"It almost felt too good to be true for us. We were super excited about it."

Weagle's departure from Team Homan was a stunner. They had reached the final of the Scotties Tournament of Hearts last month in Moose Jaw, Sask., where Weagle was named a first-team all-star.

"Certainly when I got the call from Team Homan, I was disappointed that I didn't have the opportunity to write my own ending of my story," Weagle said. "But so many people have reached out and told me that things happen for a reason and I think that this is an opportunity for a new chapter for me."

Jones and Homan have had many memorable games against each other over the years and have played together at the Continental Cup. Each team has also supported the other at international events like the world championships or Olympics.

"We have a lot of respect for them on and off the ice," Jones said. "Lisa was definitely a part of that. I've always thought she was just a great person and a great individual. You can tell that she works so hard at the game and truly loves the game.

"To have that as a part of our team is exciting. I think she's one of the best leads to ever play the game and now she gets to be a part of Team Jones, which is amazing."

Homan and Jones have been at or near the top of the Canadian rankings for most of the last decade.

Jones is currently slightly ahead of the fourth-ranked Homan, behind top-ranked Kerri Einarson and Tracy Fleury. Weagle will become the import player on Team Jones next season.

"We connected instantly and our goals were aligned," Weagle said. "What struck me the most was hearing it in Jen's voice that she wants to win and she's very determined. This is an athlete that's won everything there is to win in curling and she still wants to do more.

This report by The Canadian Press was first published March 18, 2020.