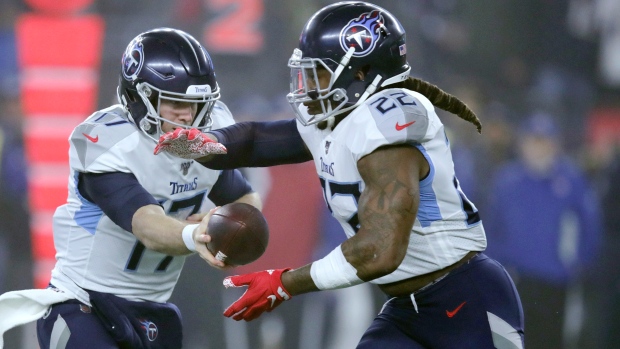 "You know, a little bit. I respect Derrick. I love playing with Derrick and think he played his tail off last year and should be paid," Tannehill told SiriusXM NFL Radio. "So you know, anytime a teammate gets paid, that's something that I get excited about. Especially a guy who worked extremely hard and lays it on the line each and every week. So, obviously would love to see Derrick get extended and, you know, I'll be keeping an eye on that."

The two sides have until Wednesday afternoon to reach an extension or Henry will be forced to spend the season playing under the $10.2 million franchise tag. ESPN's Adam Schefter reported Tuesday that no deal is expected between the two sides.

The Titans extended Tannehill, who also slated for free agency this off-season, earlier this year on a four-year, $118 million contract.

The 26-year-old Henry ran for career high 1,540 yards with 16 touchdowns over 15 games in the 2019, his fourth season with the Titans. The Alabama product also had 206 yards receiving with a pair of scores. The breakout season earned Henry his first career Pro Bowl honour.