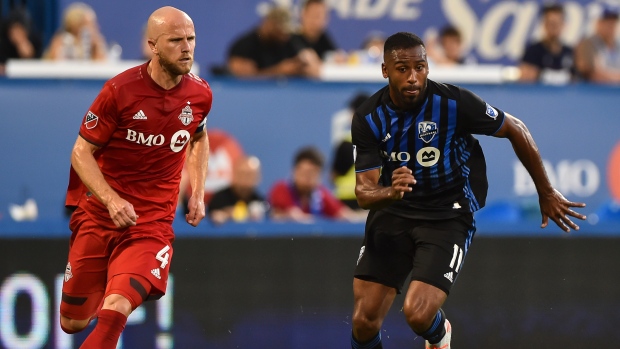 Toronto FC and Montreal Impact do not need an excuse to have a heated, playoff level intense match during the regular season. But this Saturday at BMO Field, there is going to be so much more than bragging rights on the line.

The Canadian rivals are currently tied on points at 34, with the Impact currently holding the seventh and final playoff spot by virtue of having an extra win.  Toronto FC is officially ninth in the standings as they are also tied at nine wins and 34 points with Orlando City SC, but with a game in hand.

Make no mistake though, bragging rights between Montreal and Toronto are always important and the pitch is currently where the most critical battles between the rival cities are being waged.

If the Impact are going to silence Saturday’s heavily partisan crowd in Toronto, they’ll have to do it without star midfielder Ignacio Piatti, who was ruled out of action for three weeks with an adductor injury on Aug. 16.

The 34-year-old has only appeared for the Impact eight times this season, recording three goals and one assist.

They’ll also have to do it with a new man on the touchline as the team parted ways with head coach Remi Garde on Wednesday, replacing him with former Houston Dynamo manager Wilmer Cabrera.

Saphir Taider enters the match as the Impact’s leading scorer with nine goals and five assists in 25 games this season.

Orji Okwonkwo is second on the team with seven goals in the 22 MLS games he’s played this season for the Impact.

The Impact will also be looking to reverse two results when they take the field on Saturday.

Their most recent match was a 3-3 draw against FC Dallas, which looked for the first 58 minutes as though it was going to be a romp for the Impact.

After Lassi Lappalainen found the net twice in the opening half, Okwonkwo added a third in the 56th minute to give the Impact a 3-0 lead.

In the 59th minute, Zdenek Ondrasek pulled one back for FC Dallas, before Reto Ziegler converted a penalty in the 85th minute and Ryan Hollingshead headed home a 90th minute corner to share the points.

The other match is this season’s previous meeting between the rivals, a 2-0 road victory for Toronto FC at Stade Saputo on July 13.

Alejandro Pozuelo, who is second on the team with nine goals in 22 games, opened the scoring with a strike from the edge of the box in the 61st minute.

After the teams battled back and forth with great saves made on both ends, Toronto FC’s leading scorer Jozy Altidore, who has found the net 10 times in 16 games, smashed a free kick off the post and into the corner of the net five minutes into stoppage time to confirm the victory and all three points for the visitors.

Toronto FC also enters the contest on the back of a draw, they played to a 2-2 saw off with Columbus Crew last Saturday, thanks to another late marker by Altidore, who headed home the tying goal.

After Saturday’s game, the two rivals will be nowhere near finished trying to ruin each other’s seasons.

They will meet on Sept. 18 in Montreal and Sept. 25 in Toronto to decide the 2019 Canadian Championship and a berth in the next CONCACAF Champions League.