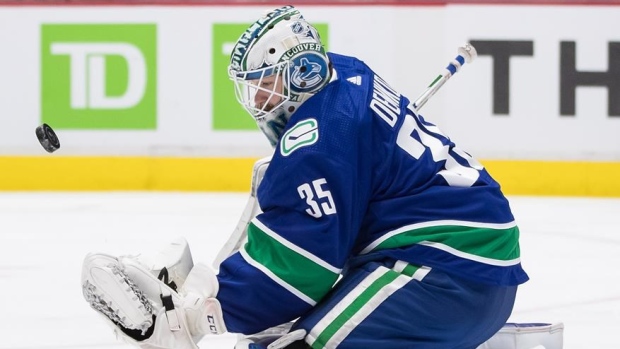 VANCOUVER — The Vancouver Canucks will be without two of their brightest stars Friday as COVID-19 continues to ripple through the locker room.

Goalie Thatcher Demko and forward J.T. Miller both tested positive for the virus via rapid tests on Thursday and were held out of practice as the team awaits the results of further testing.

UPDATE: The Canucks announced late Thursday night that Demko and Miller were both placed in COVID-19 protocol.

The Vancouver Canucks announced today that forward J.T. Miller and goaltender Thatcher Demko have been placed into the NHL’s COVID-19 protocol.

Despite the latest adversity, the Canucks (18-18-3) simply need to keep going as they prepare to host the Florida Panthers on Friday, Motte added.

“From a group mentality, you’ve got to stick with it," he said. "Regardless of who’s out of the lineup or how many guys, you’ve got to find a way to piece a game together and go out and win. That’s kind of the mindset we’re going to have not just tomorrow but the rest of the way here.”

Sixteen Vancouver players have been placed in the NHL's COVID-19 protocol since Dec. 14.

“It’s nothing new. It’s happened to different players this time," said head coach Bruce Boudreau. "But it doesn’t matter to me. If you play a really good game and play the right way and you get good goaltending, then you have a chance to win. And that’s what our belief is and what our hope is.”

All three tested positive while in the U.S. during the Canucks recent road trip and Boudreau said he has "no clue" when they'll be able to return.

“This whole border thing is quite unfair, quite frankly," he said. "I have a hard time understanding how COVID in the States is different than COVID in Canada. When they cross the border all of a sudden it turns into a 10-day quarantine here rather than a five-day quarantine (in the U.S.). It’s just frustrating, I guess.”

If Miller is confirmed positive, the Canucks will be without three of their four top scorers against the Panthers — a team that downed Vancouver 5-2 in Florida on Jan. 11.

The loss kicked off a gruelling road trip that saw the Canucks face five of the NHL's best teams over seven days. After suffering tough losses through the first three outings, Vancouver rallied to collect a 4-2 win over the Capitals and a 3-1 victory over the Predators.

Now the Canucks are returning home to play their first game in Vancouver since Dec. 14. The team had seven games postponed by outbreaks around the league and provincial health orders that limit capacity at indoor sporting events to 50 per cent.

With several players currently sidelined by COVID, some new faces could be in the lineup Friday, including goalies Spencer Martin and Micheal DiPietro. Both are currently on the Canucks' taxi squad and were on the ice for practice Thursday.

Boudreau noted that Martin is likely to get the start Friday if Demko is unavailable. The final decision will be up to goaltending coach Ian Clark, Boudreau said, but Martin has the edge in experience.

The 26-year-old native of Oakville, Ont., has a 5-0-2 record for the American Hockey League's Abbotsford Canucks this year, posting a .921 save percentage and a 2.24 goals-against average. Martin played three games for the Colorado Avalanche in 2017, going 0-2-1.

The Canucks defence will do its best to help out regardless of the goalie situation, said veteran blue liner Oliver Ekman-Larsson.

"It’s not too much that’s going to change," he said. "We’re still going to have to do the same thing, blocking shots playing good defence in front of our goalie and all over the ice. That’s the mindset for (Friday), just whoever’s in the net, we’re going to battle and do whatever it takes to get a win.”

The Canucks will soon have a new face in their front office, too.

Rachel Doerrie announced on "The Steph and Graff" Podcast Thursday that she's joining the team in an analytics role.

"I don't think it's really sunk in yet that I'm joining the Canucks and everything they're becoming," said Doerrie, who previously worked for the New Jersey Devils and as director of advanced performance for the York University Lions.