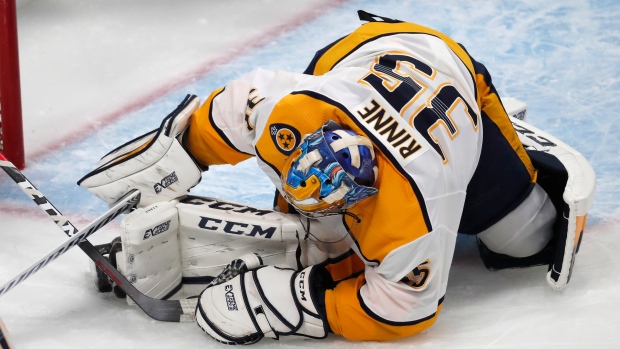 Owners of a pristine 8-0 road record, the Nashville Predators are the only team to be perfect away from home ice so far this season and, as such, are ranked No. 1 in our weekly Power Rankings for a second consecutive week.

Nashville, which remains first overall in the NHL standings after winning five straight, has been ranked either No. 1 or 2 in six of our first seven TSN 7-Eleven Power Rankings of 2018-19 and are this week’s highest-ranked team once again, according to consensus rankings formulated by the TSN Power Ranking panel of Ray Ferraro, Jeff O’Neill, Jamie McLennan, Craig Button and Darren Dreger.

The Predators, who had the league’s best road record last season, have been backstopped by Pekka Rinne (6-1-0) and his league-best 1.55 goals-against average and .949 save percentage as the quarter-season mark for most teams approaches this weekend. It’s the point in the season when many general managers ponder shuffling the deck but you can bet that Nashville GM David Poile won’t be among the team executives thinking about reloading their rosters in a bid to save their seasons.

The Tampa Bay Lightning, who had won four straight prior to Sunday’s loss to the Ottawa Senators, remain in the No. 2 spot for a second straight week. The Bolts are being chased by the red-hot Minnesota Wild, who remain in the No. 3 position this week after going 5-2 on their franchise-record seven-game road trip.

Minnesota has won 10 of its last 12 games thanks to top-notch goaltending from Devan Dubnyk (8-3-2 record,.933 SV%) and Alex Stalock (3-1; .905 SV%) and plenty of high-octane offence from Mikael Granlund, who has four goals in his last three games and eight tallies in his last 10 to lead the Wild in scoring (18 points).

Rounding out our top five this week are the No. 4 Boston Bruins, moving up six spots from No. 10 last week, and the No. 5 Winnipeg Jets, who won both of their games last week after sitting in the No. 7 position a week ago.

Sharing the most significant gain of the week - with both teams catapulting 14 spots after going 3-0 last week - are the Philadelphia Flyers and the Florida Panthers. The Flyers leap to No. 9 this week after being ranked No. 23 while the Panthers jump to the No. 15 spot from third last (No. 29) a week ago. Making the biggest drop of the week are the slumping Edmonton Oilers, who have lost four straight to fall all the way to No. 22 after being ranked No. 6 last week.

The lowest-ranked teams this week include: the No. 27 Anaheim Ducks, who continue to have problems scoring; the Senators at No. 28, climbing two spots from last week despite their league-worst penalty kill; the No. 29 New Jersey Devils, losers of three straight who managed just one victory on their seven-game road trip; the No. 30 Chicago Blackhawks, whose downward spiral (their losing skid now sits at seven games) continues under new coach Jeremy Colliton; and the offensively challenged Los Angeles Kings, who sit dead last at No. 31 for a second straight week and have now lost another goalie to injury. Jack Campbell is out for four-to-six weeks with a torn left meniscus to join No. 1 netminder Jonathan Quick (also a torn meniscus in his knee) on the shelf.

Pekka Rinne leads the league with a .949 save percentage to go along with his 6-1-0 record. The Preds are on a five-game winning streak, outscoring their opponents 18-7, and have yet to lose on the road.

The Lightning ended their four-game winning streak (6-4 loss to Ottawa on Sunday) but still managed to score four goals for the fifth consecutive time. They lead the league in goals for per game at 3.65.

The Wild finished off their franchise-record seven-game road trip in style, winning five games and outscoring their opponents 25-17. Top scorer in the seven games was Mikael Granlund (5-3-8).

David Pastrnak had a hat trick against Toronto and leads the league with 16 goals. Jaroslav Halak, who made 40 saves in the same game, is a surprise 6-1-2 with an NHL second-best .945 save percentage.

The Jets ended their power-play goal streak at 11 games and have a league-best 34.0 power play percentage. Blake Wheeler leads the league with 12 power-play points and has a 10-game point streak.

After outscoring opponents 14-2 during a three-game winning streak, the Leafs hit a speed bump (the Bruins' top line) and fell 5-1 to Boston to lose their first road game of the season.

The Canucks lost in a shootout to Buffalo but still extended their point streak to six games (4-0-2). Jake Virtanen and rookie Elias Pettersson lead the way during the streak with five goals each.

Tomas Tatar didn’t work out well in Vegas last season, but he’s worked out just fine in Montreal. He scored his seventh goal of the year, the winner in a 5-4 victory over his former team.

The Flyers, led by Claude Giroux’s 22 points for seventh in NHL scoring, have turned around a 4-7-0 start with a six-game point streak (5-0-1) that featured Brian Elliott’s first shutout of the season.

With a 3-1 win over Calgary Sunday, the Sharks ended a dubious and curious streak of nine straight games when they allowed three or four goals a game. Martin Jones (8-4-1) stopped 29 shots in the win.

David Rittich (5-1-0) recorded his first career shutout in a 1-0 defeat of L.A. to give the Flames their fifth win in six games. Calgary is allowing just 2.18 goals per game on the road, third best in the NHL.

Casey Mittelstadt dispsy-doodled the heck out of the Canucks goalie in Saturday's shootout and Jeff Skinner scored his 12th goal in the win after the Sabres tied it with two goals in the last 2:27 of the third.

The Blue Jackets scored three goals in 4:14 against the Rangers to overcome a two-goal deficit and take the lead but still lost in the shootout. They’re currently on a four-game point streak (2-0-2).

Jason Spezza scored a goal in his 1,000th NHL game but it wasn’t enough for the Stars who fell to the Predators in overtime. Dallas averages 3.89 goals for per game at home and just 1.88 on the road.

The return of Roberto Luongo after being injured in Florida’s first game of the season has turned around the Panthers’ fortunes. He’s started three times and the team won all three games.

The Caps' power-play percentage of 31.5 is second only to Winnipeg. Nicklas Backstrom and Evgeny Kuznetsov have 11 power play points each, and John Carlson and Alex Ovechkin each have 10.

A minor injury to Antti Raanta resulted in a minor losing streak. The Coyotes, who were 2-12-2 after 16 games last season, lost three in row and allowed 14 goals before Darcy Kuemper righted the ship.

After a solid 7-2-2 mark, the Avs suffered through a five-game losing skid (0-4-1) and allowed 25 goals. They ended it with a 4-1 win in Edmonton with two points from NHL scoring leader Mikko Rantanen.

A 4-0 shutout over Arizona was Casey DeSmith’s second of the season and ended a five-game winless streak (0-5-1) when the Pens were outscored 20-6. He has an NHL third-best .942 save percentage.

The Rangers continued their shootout dominance to go 4-0 on the season. All three of their road wins have come in the shootout and Kevin Shattenkirk leads the league with three goals in three chances.

The Islanders lost both of their games in Florida by a score of 4-2 to end their seven-game point streak (5-0-2). They had won three in a row on the road prior to that with a 14-5 scoring margin.

Leon Draisaitl had three goals as they lost three straight on the road and were outscored 13-5. Back home they lost again and Connor McDavid has been held pointless twice in his last three games.

The 'Canes have just one win in their last seven games but have also lost twice in OT during that span despite having over 50 shots in each of those games. Scott Darling has just one win in four starts.

Chad Johnson allowed one goal against Carolina and then shut out San Jose in just his second and third starts of the season. Overall, the improving Blues have won four of their last six games.

One of their problems is that they're only 3-8-0 on the road and rank 27th in away goals scored at just 2.20. Last year they averaged 2.98 goals on the road. Max Pacioretty has just two points in 14 games.

After a successful early-season record that featured a heavy home schedule, the sliding Devils fared poorly on a seven-game road trip, losing six of those games and allowing 33 goals in the losses.

Firing three-time Stanley Cup-winning coach Joel Quenneville didn’t pay immediate dividends for the Blackhawks. They lost their first two games without him to extend their losing skid to seven.

A 1-0 loss to Calgary was the first time the Kings had been shut out this season but it was the seventh time they failed to score more than one goal. They have a league-worst 2.06 goals for per game.