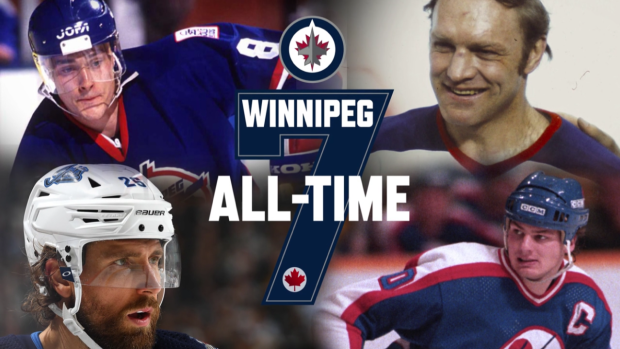 TSN Hockey introduces the All-Time 7 Project. We are naming all-time teams – 21 players, a head coach and GM - for each of the seven Canadian NHL clubs. Today, we continue with the Winnipeg Jets.

Three teams in one.

That’s what it amounts to for the Winnipeg Jets’ all-time team.

Blending the WHA Jets with the NHL Jets 1.0 and 2.0 results in a powerful aggregation of players from Bobby Hull to Dale Hawerchuk to present day stars Connor Hellebuyck, Blake Wheeler and Mark Scheifele.

If you add in Dustin Byfuglien who didn’t play a single game this season, but did not officially part company with the Jets until mid-April, Winnipeg has more 2019-20 players (four) on its all-time team than any other Canadian NHL franchise.

Of course, the all-time team is actually four teams in one. Three all-timers - Wheeler, Byfuglien and Andrew Ladd – were part of the Atlanta Thrashers, who were relocated to Winnipeg in 2011 in a case of turnabout is fair play.

The first iteration of the NHL Jets was relocated to Phoenix in 1996 when Eddie Olczyk famously told fans, “wherever this team ends up, when this team wins a Stanley Cup, it’s coming back to Winnipeg.”

Olczyk, for all his 201 points in 214 games with the Jets, missed out on being eligible for the all-time team because he didn’t play the requisite 225 regular season games.

Don’t worry, though, the all-time Jets have no shortage of firepower.

At centre, they have a six-time 100-point scorer (Hawerchuk) and another who scored 14 goals over 17 playoff games in one postseason (Scheifele).

And at defence, they have a blueliner (Phil Housley) who collected an astounding (and league-high) 259 points in 232 games over a three-year period in the 1990s.

□ Team: two goalies, six defencemen, 12 forwards and one foundational player
□ Members must have played at least 225 regular season games with the WHA and/or NHL Jets.
□ At least one member of the all-time team must be from the 2019-20 Jets
□ Players are slotted in positions they played with the Jets
□ One line must be comprised of defensive standouts, aka a checking line
□ One pair must be comprised of suffocating defenders, aka a shutdown pair
□ Lines and pairs are put together because they fit together, not because they are necessarily the first, second and third best at their positions
□ Foundational players are defined as players part of the fabric – the DNA – of a franchise
□ Last cuts by position are exactly as advertised, the players who just missed selection to the all-time team 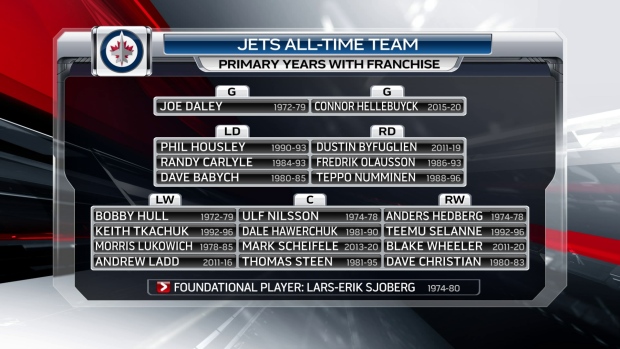 Goalie Connor Hellebuyck
The 2019-20 Vezina Trophy frontrunner already was a second all-star in 2017-18 and is tied for most goalie games (244) the past four seasons.

LD Phil Housley – RD Dustin Byfuglien
Housley’s 97 points in 1992-93 are the most ever by a defenceman playing for any of the Jets’ teams and nothing speaks to the duality of Byfuglien as much as the four-year period (2013-17) during which he compiled the fourth most points by a defenceman (206) and the most penalty minutes (446).

LD Randy Carlyle – RD Fredrik Olausson
Two Jets 1.0 defencemen leaders are joined at the hip: Carlyle played the most games (564) and Olausson earned the most points (335).

LD Dave Babych – RD Teppo Numminen
Shutdown Pair: 1980 No. 2 overall pick Babych may have been a potent offensive force but he was also an excellent defender and a good fit beside the inestimable Numminen for whom numbers could never capture his overall value.

LW Bobby Hull – C Ulf Nilsson – RW Anders Hedberg
The Hot Line delivered regardless of the time of year. Each of them averaged at least a point and a half per regular season game. Hull is the all-time leader in WHA playoff goals and Hedberg, third; Nilsson is first all-time in assists.

LW Morris Lukowich – C Mark Scheifele - RW Blake Wheeler
Lukowich led the WHA-NHL Jets in goals three straight years (1979-81) while one of Scheifele and Wheeler has led Winnipeg in points each of the past five seasons.

LW Andrew Ladd - C Thomas Steen – RW Dave Christian
Checking Line: The defensive conscience of the forwards is a combination of terrific two-way players Ladd, Steen and Christian all of whom served the Jets with distinction and as captains.

Foundational Player LD Lars-Erik Sjoberg
‘The Little General’ was an exemplary player and person over six seasons in the ’Peg, winning top defenceman honours in the WHA and higher honours for the way he conducted himself with the Jets.

Head Coach Paul Maurice
Maurice’s seven seasons represent the longest run of any Jets’ coach and his .579 point percentage over 516 regular-season games is a testament to his success.

General Manager Rudy Pilous
It’s hard to discern precisely where all the credit belongs for building the revolutionary WHA Jets, but one thing is for sure – Hall of Fame builder Rudy Pilous was the GM of two Avco Cup championship teams.

All final decisions are challenging but two players from the Jets 1.0 stand out as particularly tough last cut calls. First is left defenceman Dave Ellett, who was first in career regular season goals by blueliners and scored one of the biggest goals in all Jets’ history, the double OT decider in Game 4 of the 1990 playoff series versus Edmonton. Second is Paul MacLean, who stands third in all-time goals.

Who is the biggest omission from the Winnipeg Jets’ all-time team?