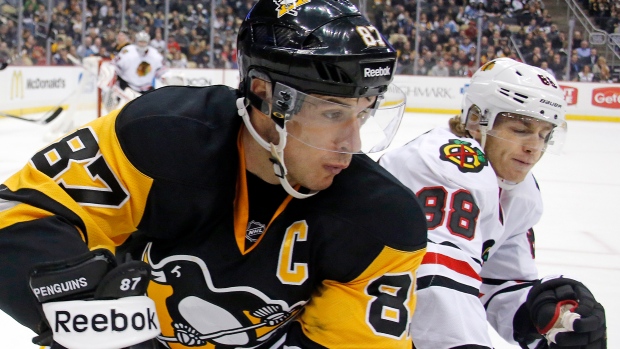 One of the fun things about the NHL postseason is that it's really the only area that lends itself to any real form of predictive analysis. The single-game match-ups we observe in the regular season are just swamped by randomness and extremely difficult to forecast with the data we currently have available, and even the best machines have recognized that there are substantial limits on how reasonably accurate single-game forecasting can be.

That's not to say that the playoffs aren't noisy – even a seven-game series is heavily-dependent on what team gets the bounces, what team stays out of the penalty box, what team doesn't get beaten up on the injury front, and so forth. Consider this: the venerable "JLikens" argued in 2011 that the 'best team in hockey' only wins the Stanley Cup once every five seasons.

Still, we shouldn't let variance be a total deterrent – especially if we can find a singularly predictive metric or a model based on a series of predictive metrics that's doing well or has done well in accurately pinning down series winners.

To this point, I've recently looked at the power of Score-Adjusted Fenwick% (a proxy for puck possession, weighted for score effects) over the last twenty-five games of the regular season. The idea is that the metric gives us a feel as to how each team controls play at 5-on-5, but focuses on the more recent performance by the team heading into the post-season. This is particularly important, since it will cut out some of the earlier season data that may not be reflective of the team's current performance or the team's current roster (via injuries, trades, etc.). And, if you're one who believes in momentum (Rob Vollman at ESPN believes it may play a small role), then you're also capturing that in the data.

First, let's answer the question: Why should we care about Score-Adjusted Fenwick% Last 25 in general? The answer is clear: the better you are on this front, the more likely you are to proceed through the postseason.

To get into the playoffs, you generally have to be an above-average puck possession team. As it stands this year, thirteen of sixteen teams controlled play better than 50% in their last twenty-five games – we will get to the exceptions in a minute. But, you can see a pretty clear and decisive trend here as the rounds progress. The deeper you get, the more dominant your team generally is from a skating perspective at 5-on-5.

Thankfully, that's a question we can answer. There have been 105 playoff series since 2007. Which metric has been the most accurate in forecasting future outcomes – points accrued, goal differential, or possession numbers over the last 25 games?

Now, it's ultimately possible that Score-Adjusted Fenwick% Last 25-Games is running a bit hot over the past seven seasons, and/or that the other two metrics we looked at are running a bit cold. Still, it's pretty difficult to sell a bill of goods that Score-Adjusted Fenwick% Last 25-Games is valueless. It's beaten the regular season standings – which I think is an indictment of the league's standings and point structure, but that's an argument for another time – soundly, and has gotten the better of goal differential, too.

This brings us to the last (and most important!) question: how do the teams heading into the post-season look by Score-Adjusted Fenwick% Last 25, and what can we ascertain about some of the first-round match-ups?

A few thoughts on these numbers, in no particular order:

Pittsburgh's been getting buried in the media for poor play, but 'poor play' has really just meant 'poor luck' and little else. The concerning thing about the Penguins, though, is that they really are banged up on the blueline, and you have to qualitatively take injuries into consideration. Can Pittsburgh be a > 55% team without Kris Letang? I'm not sure the answer to that is yes. Still, this is a very good hockey team.

Montreal stands out because they sit near the top of the real standings, but sit pretty low here. The big answer to that discrepancy is obviously Carey Price. Goaltending is critically important, and he gives his team an advantage that no other goaltender can match this season. You do get worried that this team, unlike most other playoff-calibre clubs, gets routinely out-shot and out-chanced.

Anaheim went from 'drawing Los Angeles' to 'drawing Winnipeg' in round one, which doesn't strike me as fair for a team that was just so dominant start to finish this year. The Ducks have definitely improved from years past, but the Jets are a really, really tough draw. The saving grace is that if Anaheim can advance, they'll draw the weakest remaining 5-on-5 team in round two by virtue of Vancouver (15th) and Calgary (16th) playing each other in round one.