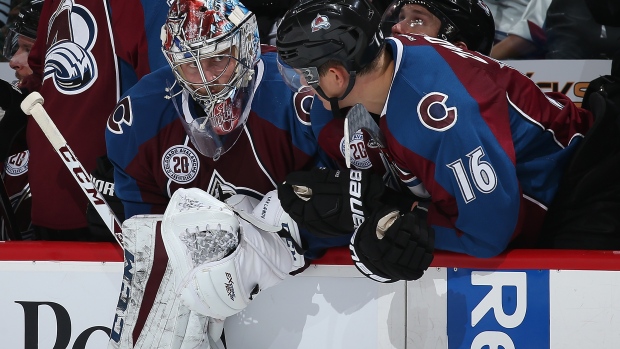 One of the areas where hockey analytics can really make in-roads toward changing attitudes in the game pertains to pulling the goaltender, a team’s desperation play at trying to equalize in the dying moments by trading their netminder for an extra skater.

Why am I optimistic? Well, figuring out the best time to pull the goaltender is little more than understanding probability. At different intervals of the game, there is a percentage chance that the trailing team will tie the game before one of two other outcomes occurs: the clock hits zero, or the leading team scores an empty-net goal. If you can identify the optimal point where you should vacate the net and add the extra attacker, you'll give yourself the best possible chance of taking a game to overtime.

But, I’m not entirely sure we have seen significant movement on this front. Certain teams seem to be more aggressive, but across the league there are plenty of instances where coaches have submarined their team’s chances at tying the game merely because of overt risk aversion.

The point here isn’t that all three teams lost. The point is that all three teams seemed to have waited until the dying moments of the game – likely far past the break-even point where the possibility of a game-tying goal exceeded conceding the empty-netter. There never seems to be any substantiation or justification for why the coaches waited as long as they did beyond, “Well, that’s what coaches in prior years have done.”

Across the league, coaches have become marginally more aggressive at pulling their goaltenders, but evolution has been pretty slow. This has been noted in older posts by Five Thirty Eight, but you can see that there has been a hint of additional aggression in recent years. 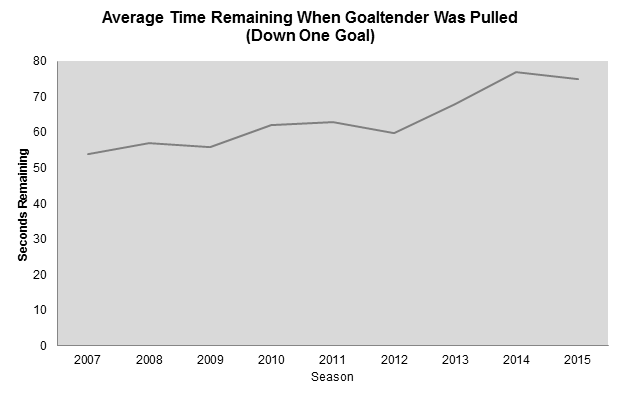 On average, most coaches are pulling their goaltender down a goal with about 1:15 (or 75 seconds) remaining in the game. That’s more than 20 seconds earlier — a 28 per cent increase — in a little under a decade. Progress, undoubtedly.

But, is it enough? Probably not. Again, this is a probability we can reasonably calculate, assuming we know the following things: goal-scoring talents of teams involved in games, the ratio of empty-net goals to equalizing goals (it’s roughly between 2:1 and 3:1), and the actual second a goaltender was pulled from any game in which his team was down one goal.

With that information, we can simulate every game 25,000 times and determine the exact second interval where the trailing team – based on their talent versus their opposition’s talent – has the best probability of tying the game going forward. (Free tip: if you are curious, War on Ice has tried something fairly similar in the past.)

So, what does the data say for 2015-16? Are trailing teams still waiting too long to pull the goaltender, or has that issue been addressed? 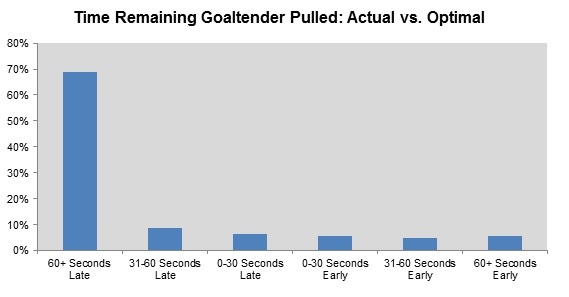 Well, this is striking. Our goal-scoring probabilities suggest that teams aren’t just a bit late in their reluctance to pull the goaltender – they are painfully off the mark.

How much so? Well, again, our actual average time of goaltenders leaving the net is about 1:15. But, if you are looking for the best chance to tie the game, it’s actually close to 3:00. And you can see how the variances look for many of our games this year. 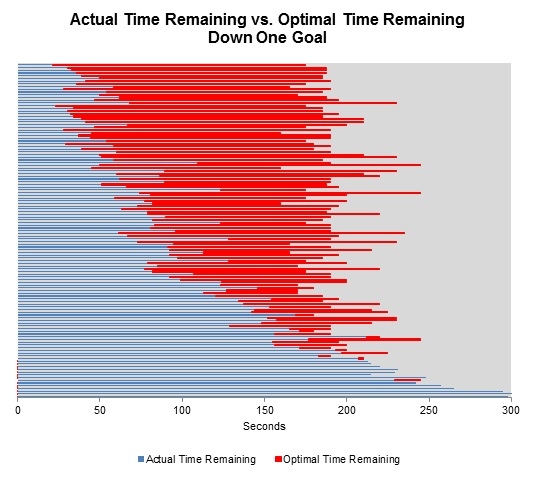 Pretty consistently, the models recommend that goaltenders for teams trailing down a goal should be out of the net somewhere between 2:30 and 3:00 remaining. Depending on team talent disparities (at least as it pertains to goal-scoring), that can slide a bit in either direction.

Pulling the goaltender is a risky proposition. But so too is losing a game by one goal. This is understandably a delicate balancing act for coaches to manoeuvre through, but the math on pulling goaltenders is pretty clear, and far more substantiated than the gut feelings that have, I suspect, driven historical decisions.