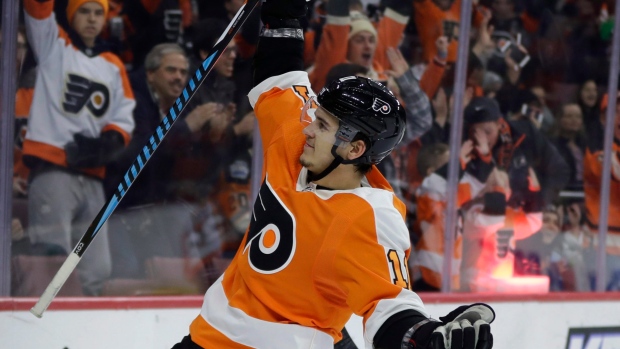 It’s Sept. 12, and the biggest story in the National Hockey League remains the crop of talented restricted free agents without contracts.

The list is headlined by Toronto Maple Leafs winger Mitch Marner, but he isn’t the only marquee name who is in the midst of contract negotiations. Mikko Rantanen, Brayden Point, Patrik Laine, Matthew Tkachuk, Kyle Connor, Charlie McAvoy and Brock Boeser – to name just a few – are all searching for their next deals as well.

Yet one of the more interesting cases may concern Philadelphia Flyers centre Travis Konecny. On Wednesday, TSN Hockey Insider Bob McKenzie shed some light into the stalemate, offering up the following.

The crux of the problem seems to be PHI is basing its offer on the fact Konecny has averaged just under 15:00 TOI in his first three seasons but the player’s counter argument is that he’s amongst the better even-strength goal-scorers for his age/experience over last two seasons.

"While PHI and RFA D Ivan Provorov appear to be making some progress on a new contract, or at the very least talks have intensified over the last couple of days, the same cannot be said for PHI RFA F Travis Konecny," McKenzie tweeted. "PHI and Konecny are not close on a new deal. The crux of the problem seems to be PHI is basing its offer on the fact Konecny has averaged just under 15:00 TOI in his first three seasons but the player’s counter argument is that he’s amongst the better even-strength goal-scorers for his age/experience over last two seasons."

This sort of stuff happens in contract negotiations all of the time, but I find it particularly interesting that Philadelphia is trying to suppress some of the contract through a usage argument.

But what’s true for the population of players may not be true for any one individual player. In this case, the argument is that Konecny’s limited usage will ultimately deflate the total value of his contract. What is implied is that Konecny hasn’t played more minutes because there have been better options available to Flyers coaches (be it Dave Hakstol or Scott Gordon).

Through his first three seasons, Konecny has averaged 12:40 in ice time at 5-on-5 and 14:47 across all situations, both eighth amongst regular Flyers forwards. Paying depth forwards is a cardinal sin, and to the extent the Flyers believed that’s where Konecny was most sensibly deployed, it’s understandable they would take a hard line in the negotiations.

But the challenge here is that the usage and performance are a bit contradictory. Whereas Konecny has consistently been utilized as a third-line forward with limited power-play time and no shorthanded usage, his overall contributions to the Flyers performance have been noteworthy.

Consider just 5-on-5 play for a moment. Over the last three seasons, Konecny is averaging two points per 60 minutes. That puts him second amongst Flyers regulars, just decimal points behind team captain Claude Giroux. In the same timeframe, he also leads the team in shots per 60 minutes and expected goals per 60 minutes. The Flyers, generally speaking, have seen strong performance as a team with Konecny on the ice – he’s just one of four forwards (joining Sean Couturier, Nolan Patrick and Giroux) with a positive 5-on-5 goal differential, which is quite remarkable.

But what do some of the more advanced measures suggest? Let’s leverage Evolving Hockey’s Goals Above Replacement measure, which considers an individual’s contributions across all situations and the net impact said player has on his team’s performance. (The graph below will show all Flyers forwards who contributed at least 1,000 minutes of ice time over the last three seasons): 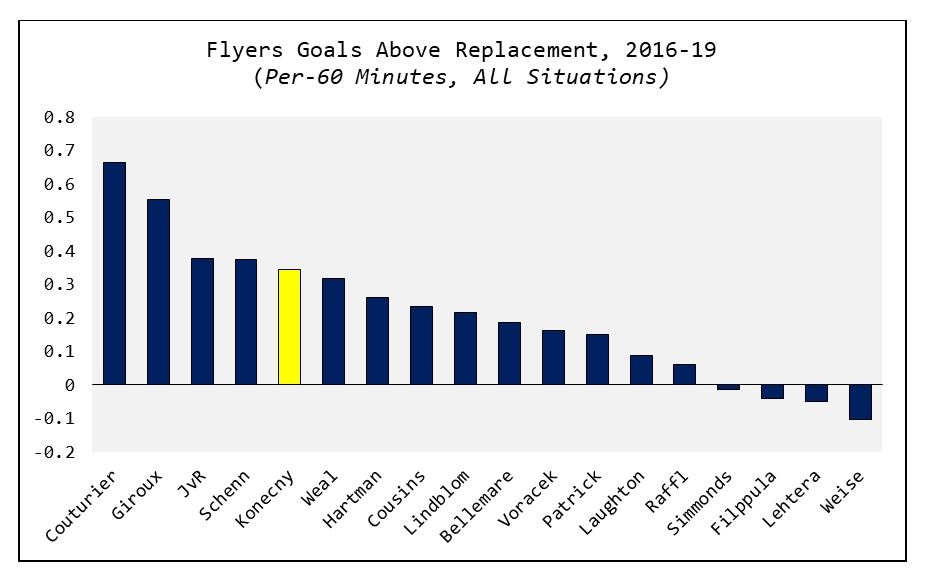 There is little doubt the face of the Flyers over the last few years has been shared by the likes of Couturier and Giroux – Couturier in particular may well be one of the league’s most underrated players, but that’s a topic for another day.

The second cluster of players would include Konecny, James van Riemsdyk, Brayden Schenn and Jordan Weal – a secondary group of players who have been positive contributors and are about a half goal per 60 minutes better than what we would consider ‘replacement level’ territory. Most of Konecny’s value comes from his offensive production at even strength and his sterling penalty differential, which helps create additional power-play opportunities for the Flyers attack.

This is ultimately what Konecny’s team is going to argue – that his contributions outweigh the more limited usage he has received since entering the league. From a production standpoint, it’s awfully difficult to separate him from players like van Riemsdyk (Toronto, then Philadelphia) and Schenn (Philadelphia, then St. Louis), both of whom are playing on lucrative deals. And while Konecny doesn’t yet have the track record of either, he does have a massive age advantage over both. Based on the increasing number of teams prepared to offer more term and money to young players, it’s not an insignificant data point.

Konecny still has time to grow and develop his game, but he also has enough of a resume to draw a little bit of a line in the sand with the Flyers. I suspect the Flyers know how productive Konecny has been and are merely trying to carry a couple more years of cost control, which every sensible team would try to accomplish.

But Konecny, like most restricted free agents right now, knows full well that he has some bargaining power. It’s only a matter of time before he starts getting extensive minutes from new head coach Alain Vigneault.

Asking for a contract that meets these expectations isn’t unrealistic, but it will be fascinating to see if Philadelphia caves.