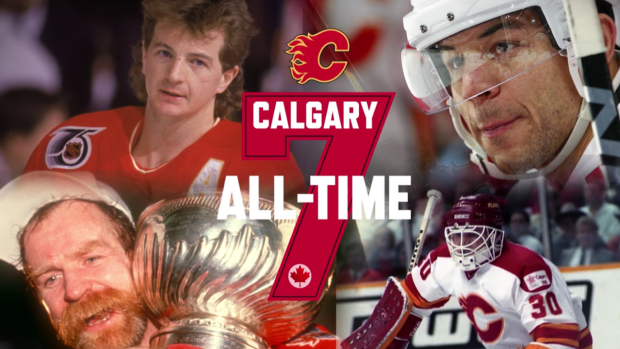 TSN Hockey introduces the All-Time 7 Project. We are naming all-time teams – 21 players, a head coach and GM - for each of the seven Canadian NHL clubs. Today, we continue with the Calgary Flames.

If you are looking for what has been right about the Calgary Flames in the NHL, look to the wing. Right wing.

There have been stars at centre – foremost among them Joe Nieuwendyk, Doug Gilmour and Kent Nilsson – but five right wingers have scored 50 goals and every one of them made first or second all-star teams as Flames.

No other NHL team features as many right wingers to score 50 goals.

And no other team has had more than two different representatives at right wing on the end of season all-star teams since 1980-81, Calgary’s first year in the NHL.

Iginla twice led the NHL in goals and was a three-time first all-star.

Fleury is the sole forward in Flames’ history to average at least one point per game in both the regular season and playoffs.

Only nine players league-wide have ever scored more than McDonald’s 66 goals in 1982-83.

And six-year Flame Loob collected 191 points in 159 games (in his last two seasons) with Calgary before returning to Sweden.

If the Flames list to the right in one respect, they lean heavily to the left in another – they have more members of their 2019-20 team on the all-time team than any of TSN’s six other Canadian teams.

Current captain and left defenceman Mark Giordano is joined by left wingers Johnny Gaudreau and Matthew Tkachuk as members of the current team who belong among the greatest players in team history.

For the purposes of this project, the Flames’ history begins with the move to Calgary, not the origin of the franchise in Atlanta in 1972. That means the likes of Atlanta stars Tom Lysiak, Eric Vail and Guy Chouinard were not under consideration because they didn’t play 225 games in Calgary.

□ Team: two goalies, six defencemen, 12 forwards and one foundational player
□ Members must have played at least 225 regular season games with the Flames
□ At least one member of the all-time team must be from the 2019-20 Flames
□ Players are slotted in positions they played with the Flames
□ One line must be comprised of defensive standouts, aka a checking line
□ One pair must be comprised of suffocating defenders, aka a shutdown pair
□ Lines and pairs are put together because they fit together, not because they are necessarily the first, second and third best at their positions
□ Foundational players are defined as players part of the fabric – the DNA – of a franchise
□ Last cuts by position are exactly as advertised, the players who just missed selection to the all-time team 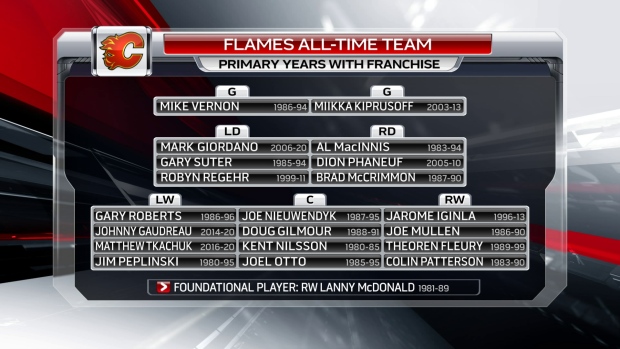 Goalie Mike Vernon
Calgary born and bred, Vernon graduated from the Western League’s Wranglers to the Flames – winning seven playoff rounds for the NHL team, and going a gaudy 16-5 during the 1989 Stanley Cup run.

Goalie Miikka Kiprusoff
The franchise leader in games, wins, goals-against average and save percentage, Kipper won a Vezina Trophy and finished among the top five in Hart Trophy voting twice.

LD Gary Suter – RD Dion Phaneuf
There is no shortage of skill or surliness with 1985-86 rookie of the year (and eventual 91-point-scoring) Suter alongside Phaneuf, a first all-star who scored double-digit goals each of his five seasons in Calgary.

LD Robyn Regehr – RD Brad McCrimmon
Shutdown Pair: Regehr, a prototypical defensive defenceman who represented Canada four times as a Flame, and the left-shot McCrimmon, who made the playoffs the first 13 seasons of his career – including three with Calgary - knew how to handle pressure.

LW Johnny Gaudreau - C Doug Gilmour – RW Joe Mullen
Thrill, will and skill. Johnny Hockey would benefit from playing with the fiercely competitive Gilmour and the brilliant Mullen, whose 16 goals in the 1989 playoffs is the fourth-highest single year total ever.

LW Matthew Tkachuk – C Kent Nilsson – RW Theoren Fleury
The Magic Man averaged a franchise-high 1.36 points per game for the Flames, but astonishingly Nilsson was still believed to have more to give. Nobody in Calgary ever said that about Fleury or Tkachuk.

LW Jim Peplinski – C Joel Otto – RW Colin Patterson
Checking Line: Otto may be the highest impact defensive forward to NOT win the Selke, Patterson began his Flames’ career as a right winger but switched sides and earned Selke runner-up status and Peplinski played only one way, all out.

Foundational Player RW Lanny McDonald
Of the seven foundational players chosen in the TSN All-Time Team Project, none doubles as the face of the franchise quite like Lanny McDonald. And not just because of his mustache. Bringing the Hanna, Alta., native back home infused the team with an instant identity. McDonald scored the go-ahead goal in the Cup-clinching Game 6 win over Montreal in 1989.

Head Coach Terry Crisp
Crisp was behind the bench in Calgary only three seasons, but oh what a three years they were. He compiled the highest winning percentage in Flames’ coaching history (.669) on the way to winning two Presidents’ Trophies – outpointing the dynastic Edmonton Oilers twice - and one Stanley Cup.

General Manager Cliff Fletcher
Fletcher was the man who oversaw the franchise move from Atlanta to Alberta, built a Cup champion and never once missed the playoffs in Calgary – laying the groundwork for his eventual election to the Hockey Hall of Fame.

Jamie Macoun was a blood-and-guts blueliner who gave his heart and soul to the Flames. It breaks our heart that he didn’t the make the all-time team. Macoun received stiff competition from Paul Reinhart for seventh defenceman status. Reinhart averaged .93 points per game from 1980-81 through 1986-87.

Who is the biggest omission from the Calgary Flames' all-time team?