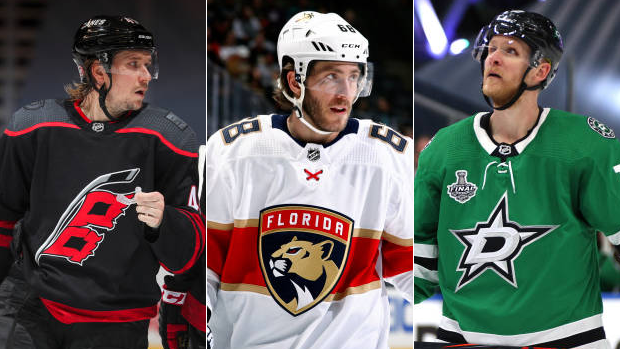 A quiet week on the free agent market saw just one player come off the top free agents board, leaving 33 from the initial Top 100 board compiled by TSN Senior Hockey Reporter Frank Seravalli ahead of Oct. 9.

Alex Galchenyuk, previously ranked at No. 17, is the lone subtraction after signing a one-year, $1.05 million contract with the Ottawa Senators last week.

As the calendar flips to November, Mike Hoffman continues to headline the top available unrestricted free agents with his camp promising patience as they wait for the right deal.

"I spoke to his agent, Rob Hooper of Octagon, on Thursday and I said, ‘listen, how patient are you guys willing to be here as this drags on’ and his answer was ... very patient," TSN Hockey Insider Pierre LeBrun said on Insider Trading last week. "That's because they know what they have in their client. They think teams are eventually going to circle back and make the kind of offers that their client should be getting. And part of that is some teams finding cap room.

"Now, I think there are some LTIR situations that could come into play here, eventually closer to December or January. Boston (Bruins) with the David Pastrnak injury, Edmonton (Oilers) with (Oscar) Klefbom, St. Louis (Blues) with (Vladimir) Tarasenko. I think those are situations that the Mike Hoffman camp looks at as potential opportunities, over time. In the meantime, if a team like Florida (Panthers) where he played the last couple years or Nashville (Predators), which is called a bunch, if they finally step up and make better offers than they have been, then perhaps there's a deal there as well. But the bottom line: They're not going to panic, Mike Hoffman's going to wait for the right opportunity."

The 30-year-old, who had 29 goals and 59 points in 69 games with the Florida Panthers last season, is open to a one-year deal.

Erik Haula, a teammate of Hoffman's on the Florida Panthers last season, remains at No. 2 after scoring 12 goals and recording 24 points in 48 games split between the Panthers and Carolina Hurricanes this past season.

Among defencemen, Sami Vatanen tops all blueliners at No. 6, one spot ahead of veteran Zdeno Chara and four spots ahead of former Calgary Flame Travis Hamonic.