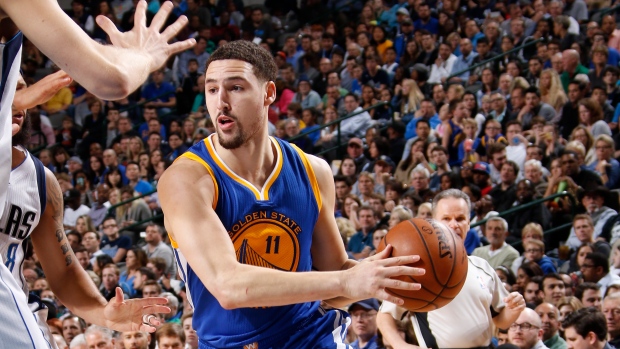 DALLAS - Stephen Curry stole the ball from Dirk Nowitzki near midcourt and hit a 35-footer to beat the first-quarter buzzer, drawing a huge roar from the typical swarm of the sharpshooting star's fans on the road.

Golden State's reigning MVP glanced another 3-pointer off the edge of the backboard from the right corner with the 7-foot German in his face again in the second quarter on his way to 31 points.

Oh, and fellow Splash Brother Klay Thompson made 10 of 15 from long range to lead the Warriors with 39.

"Right now, by NBA standards, this is bigger than the Rolling Stones on tour," Carlisle said. "Wherever they go, there's a mass of people and a huge following."

And who's Kerr to argue?

"I was on the Beatles back in '96, so I guess it's fitting that I'm now with the Stones," Kerr joked when told of Carlisle's comments. "Either way, I was just a roadie setting up the stage for both teams."

It's time to take the tour to San Antonio for a Saturday night prime-time showdown between the NBA's runaway leaders.

The game is made all the more interesting by Golden State's 32-game losing streak at the Spurs, which goes back to Feb. 14, 1997, and is the NBA's longest current drought on another team's court.

"A lot of talk about this record," Curry said. "It's there and we want to get there and do it the right way, but our mission from New Year's and even after the All-Star break was to continue to get better and reach our stride as we move toward the playoffs. I believe we're on that trend."

Nowitzki had 24 points for the Mavericks (34-35), who lost for the seventh time in eight games and dropped under .500 for the first time since Nov. 11.

Curry missed Golden State's first trip to Dallas on Dec. 30, when the Warriors lost for just the second time this season.

So there was plenty of anticipation, including before the game when Masters champion Jordan Spieth, a Dallas resident, lined up with the rest to watch Curry warm up. The two stars later chatted briefly.

Curry hit a 3 less than 2 minutes in while finishing the first half with 22 points to 20 for Thompson. They combined to make 11 of 17 from long range before halftime, when the Warriors had the highest-scoring quarter (43) and half (73) against Dallas this season.

For the game, the duo was 26 of 48 from the field, including 16 of 27 from long range as the Warriors also topped the previous game high against the Mavericks, set by Golden State in a 127-107 win in January.

In other words, Carlisle hadn't changed his opinion much after the game.

"The playmaking and shot-making is beyond breathtaking at times," Carlisle said. "But they can be beat."

Although they are fading and now in danger of missing the playoffs in the Western Conference, the Mavericks stayed close into the fourth quarter, getting within 98-97 on a 3-pointer by J.J. Barea, who had 16 points and seven assists.

The Mavericks got within five in the final 3 minutes before a 3-pointer from Thompson started the run that finished off Dallas. Curry barely missed a triple-double, leading the Warriors with 10 assists and nine rebounds.

"If we play like that for the remaining 13 games, we will beat 80 per cent of the teams," said Dallas guard Wesley Matthews, who had a scary fall but stayed in the game after his right knee buckled in the second half. "Those guys shot the lights out of the ball, but we were never out of it."

Before the scare for Matthews, whose 2014-15 season ended with an Achilles tendon tear against Dallas last March, Golden State centre Andrew Bogut and Mavericks forward Chandler Parsons left with injuries and didn't return. Bogut is doubtful for the San Antonio game after straining his left big toe in the second quarter. Parsons was sidelined in the third by right hamstring soreness.

The Warriors tied their NBA record from earlier this season by making 15 from long range in the first half on 22 attempts. They were 15 of 20 against Phoenix on Nov. 27. They also tied the franchise record with 22 for the game, going 22 of 38 after making 14 of the first 17.

Warriors: Thompson had his 1,000th career 3-pointer in the first quarter. ... Harrison Barnes scored 20 points, and Draymond Green had 15 points and eight assists.

Mavericks: Dallas fell out of seventh-place tie with Houston and is just a half-game ahead of Utah (33-35) for the final playoff spot in the West. ... David Lee had 16 points and 16 rebounds in his second game against his former team. He was on the title team last season.

Warriors: At San Antonio on Saturday.