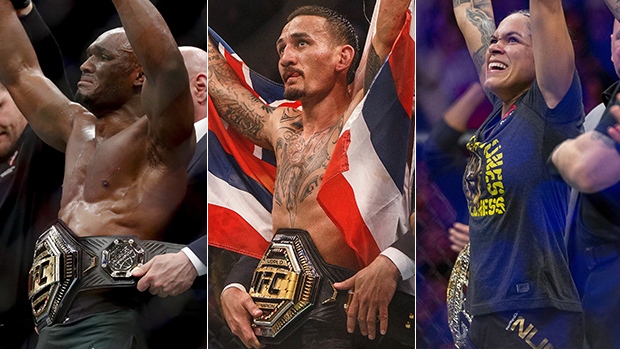 Three titles will be on the line Saturday night in Las Vegas at UFC 245, as the promotion closes out their 2019 PPV schedule with a star-studded card.

The final fight of the night will see the culmination of a heated rivalry between welterweight champion Kamaru Usman and controversial former interim champion Colby Covington.

Usman will be making the first defence of the belt he won at UFC 235 when he defeated Tyron Woodley via a dominating unanimous decision. The 32-year-old is undefeated since joining the UFC and has won 14 straight fights.

Across the cage from him will be Covington, himself riding a seven-fight winning streak that includes a win over Rafael dos Anjos that earned him the interim welterweight title. He was eventually stripped of that accolade when he was unable to complete due to having nasal surgery.

Covington has become known as much for his prowess in the octagon as his actions and attitude outside of it, including his association with U.S. President Donald Trump.

Usman is no fan of the way his opponent carries himself, and doesn’t believe any claims that the things Covington does are just an act.

“He's not going to get away with this. He's trying to find a way out right now. These are all excuses.” Usman told the TSN MMA Show. “Don't put that character on. Be the guy. You became this character and went fully into it. You have no respect for anybody, any culture, any gender, or anything, so be that guy.”

Covington is not sorry for things he’s said or done to put himself in position for his shot at the undisputed title.

“I have a platform and I can say whatever I want and I don’t care who likes me and who doesn’t,” Covington told ESPN.  “On Saturday night they are going to find out that you can’t stop me.”

In the co-main event Max Holloway will try to take another step toward the top spot in the pound-for-pound rankings, putting his featherweight gold on the line against Alexander Volkanovski.

The 28-year-old champion has not lost a bout in the featherweight division since 2013, with his only loss since then coming in a bout against Dustin Poirier for the interim lightweight title.

Holloway defeated Jose Aldo for the undisputed title at UFC 212 in June of 2017 and has three successful defences.

The Honolulu, Hawaii native is currently seventh in the UFC’s pound-for-pound rankings.

Volkanovski defeated Aldo in his last fight, a unanimous decision victory at UFC 237, to earn his spot as a title challenger.

The native of Shellharbour, New South Wales, Australia has won all seven of his bouts since joining the UFC and holds a 20-1 professional MMA record.

Holloway believes Volkanovski is a worthy challenger for his crown.

“Seventeen-fight win streak and then you go fight the king of Rio [Aldo] in Rio and you get a decision win? That’s crazy,” Holloway told ESPN.  “I think he more than deserves to be here, I just can’t wait.  Another flavour.”

The first champion who will grace the Octagon at UFC 245 is also the most decorated. Two-division champion Amanda Nunes will put her bantamweight title on the line against former featherweight champion Germaine de Randamie.

Nunes has three straight high-profile stoppage wins on her resume as she defeated Raquel Pennington with a fifth-round TKO at UFC 224, ended Cris Cyborg’s incredible 13-year unbeaten run at UFC 232 with a first-round knockout to earn the featherweight strap and in her most recent fight, used a head kick to TKO Holly Holm at UFC 239.

The 31-year-old has won nine straight bouts and continues to make her case as the greatest women’s fighter in the history of MMA.

De Randamie is a former UFC champion, having captured the inaugural featherweight title at UFC 208 with a unanimous decision victory over Holm.

The Utrecht, Netherlands native was eventually stripped of the belt when she refused to fight Cyborg and instead preferred a move back to the bantamweight division.

Her most recent fight was a 16 second TKO victory over Aspen Ladd in Sacramento on July 13.

Of the three title fights, this is the only one that is also a rematch.  Nunes defeated de Randamie at UFC: Fight for the Troops 3 via first-round TKO.

Urijah Faber will open the card in the second fight of his return from retirement against Peter Yan.  The California Kid was successful against Ricky Simon via first-round TKO in Sacramento on July 13.

The Prelims begin on TSN2 at 8 p.m. ET/5 p.m. PT and are headlined by a welterweight bout between Mike Perry and Geoff Neal.