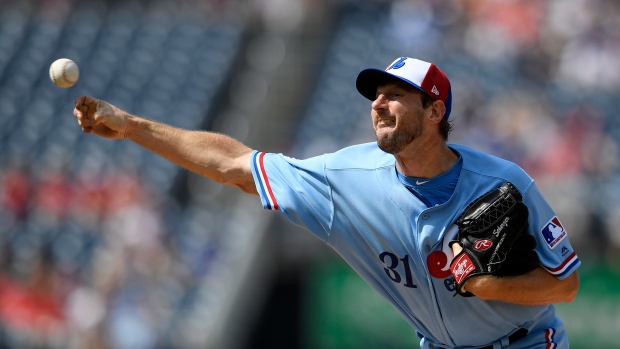 MONTREAL — An Expos throwback day at the Washington Nationals' ballpark has divided Montrealers, with some cheering the vintage uniforms donned by players Saturday afternoon as an overdue homage and others chastising the move as an "insult" to their baseball forebears.

The Nationals — created after the Expos moved to Washington in 2005 — announced this week they would tout the powder blue away jerseys and pants along with the vintage caps sported by Montreal players in their inaugural season 50 years ago.

The gimmick fits into a night of retro theatrics at Nationals Stadium that includes 1960s pop tunes, a stylized "M" on the scoreboard, a ceremonial first pitch thrown by newly inducted Expos Hall-of-Famer Vladimir Guerrero Sr. — and, of course, some poutine and smoked meat among the concessions.

While the stadium features a "ring of honour" that includes Expos legends like Gary Carter and Tim Raines, the Nationals' northern roots go largely unacknowledged in D.C., according to observers.

Tributes to all-stars such as Tim Wallach remain virtually absent from the park, he said. "They left it so that Montrealers, at least in my opinion, still have no love for this team."

But Kaufman isn't among the disgruntled.

"I think it's a nod to the history of the franchise," he said. "I look at this as an advertisement for the city of Montreal that's being done in the capital of the United States."

The debate comes amid rising emotions and renewed hopes for an Expos reincarnation in Quebec's biggest city. "It's these kind of side glances and small smiles," Kaufman said.

Stephen Bronfman — son of former Expos owner Charles Bronfman — has long pushed for a hometown revival. Late last month he praised a "groundbreaking" plan for the Tampa Bay Rays to split games between Montreal and Florida.

Sylvain Tremblay, who co-leads the Encore Baseball Montreal social media group, said he's "looking forward instead of thinking about past problems" — but he can't speak for his city.

"Basically they stole our team, and so on. That's the way some people think in Montreal," said Tremblay, whose group has more than 6,200 followers on Facebook and Twitter. "For them, it's an insult."

"The Washington Nationals wearing my Montreal Expos old uniform feels like a slap to the face," complained one Twitter user who says he lives in an off-island suburb.

Quebeckers aren't the only ones turned off by the marketing stunt.

Washington Times columnist Thom Loverro called it a "cheap, lazy, thoughtless promotion," indicating that any claim to a connection between the two teams seems as distasteful as American poutine.

To have Guerrero tossing the opening pitch is to "celebrate a corpse," he suggested, and posited that D.C. should look to its own past, which includes the Washington Senators who took off for Texas in the early 1970s.

Commenters tended to agree, with one asking rhetorically: "why do we give a rats arse about Montreal?" Another local tweeted that the throwback jersey "manages to disrespect both Expos fans and fans of both Senators teams" (there were two iterations).

Nonetheless, fans cheered late Saturday afternoon as Canada's deputy ambassador to the U.S., Kirsten Hillman, introduced the Nationals after the loudspeakers blared out, "Mesdames et messieurs, ladies and gentlemen, your Expos." Between plays the scoreboard piped out scenes of Expos lore, like Gary Carter celebrating a postseason victory in 1981, the only year the team reached the playoffs.

The shared bond of grief may offer a bridge between the two cities — the last two in Major League Baseball to see teams decamp for other climes.

"They know what kind of pain we have, because they had it in '71," Tremblay said. "What can you do? You don't take care of your girlfriend — now she's gone."

But hope is back in the air in Montreal, mingling with the heady musk of nostalgia.

"The Expos were my youth. They were one of the great joys of my life," Kaufman said. "I have not held that same passion about a sports team since they left.

"They were my team and I loved them and I miss them so much."