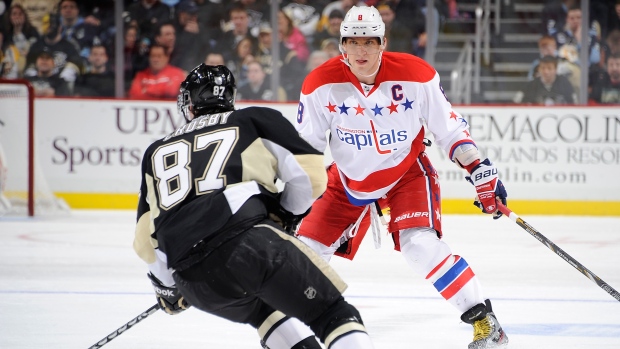 “Thumbs up” to the possibility of a first round playoff matchup between the Washington Capitals and the Pittsburgh Penguins. Agreement should be unanimous from any and all who watched last night’s meeting, won 3-2 by the league-leading Capitals.

Pittsburgh-Washington would be a first round series if the current standings were the final standings, but of course there are ways the standings could change before they do show all teams with 82 games played. The Penguins could fail to make the playoffs. And they could finish higher than they currently sit, which would scrap a first round meeting with Washington.

You’ll notice I haven’t yet mentioned the names of Sidney Crosby and Alex Ovechkin. They will most certainly be the headliners if a Pittsburgh-Washington series does take place, but last night’s game didn’t really feature them in prominent roles. Crosby did have a nifty assist on a Pittsburgh goal by Patric Hornqvist, but failed to register a shot on goal. Ovechkin had three of those but went without a point.

The rivalry exists because of Sid and Ovy, but doesn’t exactly depend on them as it once did. The leading scorer in last night’s game was Evgeny Kuznetsov. He could be the star of a Pens-Caps series, or it could just as easily be Evgeny Malkin. For that matter, last night’s winning goal was scored by ex-Penguin Matt Niskanen, to say nothing of a longer-serving member on the Pittsburgh blueline, Washington’s Brooks Orpik. So there are other storylines.

But if the NHL gets to build a marquee, it’ll say Crosby vs. Ovechkin, as it should. They can still form the NHL’s best individual rivalry. It’ll be great if they get another chance to prove it.

Connor McDavid and Jack Eichel wait their turn offstage, although that rivalry, having just begun, already feels like a mismatch. It seems unfair to ask Eichel or anybody else to keep up with McDavid.

“Thumbs up” to the potential winner of the NHL trade deadline  … the Tampa Bay Lightning? The team that did nothing?

Well, maybe. The move that might have been expected didn’t happen because general manager Steve Yzerman couldn’t get what he wanted for Jonathan Drouin, and he preferred the other options available - trade Drouin in the offseason or keep him available for this season if Drouin wanted to return, helmet in hand.

Never mind the latter, because nothing suggests it will happen, but even if Drouin did resume activity in the AHL, and even if he did show NHL skills, it would be risky for the Lightning to fiddle with a team that is moving smoothly toward the playoffs with everything in place. It is virtually the same lineup that took Tampa Bay to the Stanley Cup final a year ago. It is hard to return and do better the next year - historically more difficult to do that than to repeat as Stanley Cup champions.

The stand-pat strategy at the deadline does require the blessing of good health. Most Stanley Cup contenders want additions to provide depth, if nothing else. The Lightning are touching wood wherever they turn and are hoping they’ve seen the last of injuries to key forwards such as Ondrej Palat and Tyler Johnson.

In a wide-open Atlantic Division that could see any of four teams emerge to compete for a spot in the Stanley Cup final, the Lightning might have to be favoured simply because they did that a year ago.

They will try to do it again, the same way, with the same players. The trade deadline didn’t interest them. I get that.