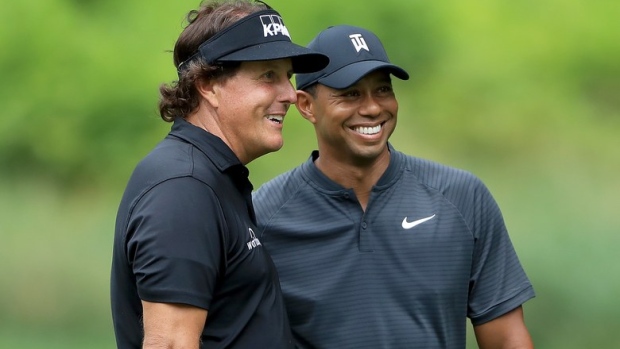 Make no mistake: the second edition of Tiger vs. Phil will be nothing like the first one. And that’s a good thing.

When Woods and Mickelson join up with Peyton Manning and Tom Brady this Sunday for The Match: Champions For Charity, there will be a different format, some unusual challenges and an interesting cast of announcers.

If it goes well, it will help fans erase any memories of the 2018 match that took place in Las Vegas.

That one featured some mediocre golf, the same amount of chatter as you’d hear at a monastery, and was plagued by technical problems with the pay-per-view stream. Despite it ending in a playoff with Mickelson earning a $9 million payday, it was pretty much a flop.

But it appears organizers have learned their lesson. Bringing in Manning, who will team with Woods, and Brady, Mickelson’s partner, adds more flavour to the fun side. The two quarterbacks have already thrown good-natured shots at each other in the previews, and might draw the two golfers into some entertaining banter. Think of the early days of the Skins Games with guys like Lee Trevino, Fuzzy Zoeller and John Daly.

It also has the potential to surpass last Sunday’s shootout with Rory McIlroy, Dustin Johnson, Rickie Fowler and Matthew Wolff, a decent event that raised more than $5 million for COVID-19 relief.

This weekend’s match will take place at Woods’ home course, the Medalist, in Hobe Sound, Fla. It will feature nine holes of better ball and nine of modified alternate shot. For that final stretch the two teammates will tee off, select their preferred tee shot and then alternate swings until the ball is holed.

This last nine will force Manning and Brady into the heat of the action, where they may end up being bystanders over the front side. However, both will get three handicap strokes over the front, with one falling on a par 3, another on a par 4 and one on a par 5 hole. The organizers will determine the holes with strokes.

The two football players are not slouches on the course. Manning reportedly carries and index of 6.4 while Brady is listed at 8.1. They have frequented the popular pro-am events on the PGA Tour over the years.

As opposed to last Sunday’s event where the golfers walked and carried their bags, these four players will each drive their own cart. That should speed up play. As well, according to television producer Jeff Neubarth, the carts will feature NASCAR-style cameras showing and hearing from the golfers as they make their way to their balls.

Neubarth, who also produced the first Tiger-Phil match, revealed on the No Laying Up podcast, that all four players will also have earpieces allowing them to hear from the producers who may get them involved in chatting about everything from the course to their opponents.

It will also let them hear from the commentators, notably NBA legend Charles Barkley, who is never afraid to stir the pot.

Barkley, who is notorious for his awful golf swing, will also reportedly play one hole and bet $200,000 that he can make no worse than a bogey.

As an additional challenge, Woods, Mickelson, Brady and Manning will play the fifth hole, a long par 4, using just one club, which they can choose. This was used during a skins game in Japan last November and Jason Day was forced to hit a greenside bunker shot with a six iron.

While the match has received the PGA Tour’s blessing, officials won’t be following it as intently for protocol ideas to use when tournament play resumes on June 11 at the Charles Schwab Challenge in Fort Worth, Texas. That was the case with last Sunday with many of the same protocols in place.

Still, this event is being conducted with strict adherence to the rules set in place by the local municipality and all players will undergo COVID-19 testing prior to teeing off. They are also being encouraged to practice social distancing at all times, something that last weekend’s players didn’t manage at all times.

The on-site personnel will be minimal with a bare-bones television crew that will include on-course announcers Amanda Balionis and PGA Tour player Justin Thomas, who is also a member at Medalist.

But just like a week ago, it will be live golf on television and that will no doubt make all golfers smile.