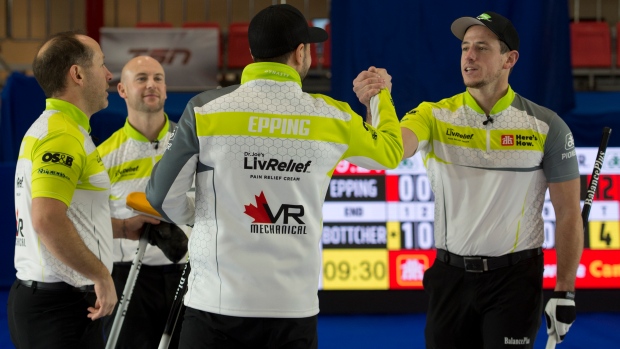 Highlights: Team Epping have struggled so far this season, holding a record below .500 events through six events. They've qualified for the playoffs in each of their first three bonspiels, most notably making it to the semi-final of the Stu Sells Toronto Tankard where they fell to Brad Gushue, 6-1. However, they hold a record of 1-6 over their two most recent events, both Grand Slams against strong competition.

Team Epping will win the Trials if…

"Team Epping needs to play better than they have been. A very slow start to the bonspiel season, the team looks lethargic. They need to play with more fire pretty soon to prove to themselves they are worthy."

John Epping’s veteran rink out of the Leaside Curling Club in Toronto has a wealth of experience at the Canadian Olympic Trials.

This will be the sixth Trials for 42-year-old lead Brent Laing. The three-time world champion has played for four different skips at this tournament, including John Morris in 2001, Glenn Howard in 2005, 2009 and 2013, Kevin Koe in 2017 and now John Epping in 2021. He’s made two finals, losing to Kevin Martin’s eventual gold-medal winning foursome in 2009 and helping to beat Mike McEwen four years ago at the Trials in the nation’s capital. Laing wore the Maple Leaf at the 2018 Winter Olympics in PyeongChang, South Korea. Team Koe finished fourth and off the podium.

Epping has the second-most Trials experience on this squad as the Saskatoon Trials will be his fourth appearance at the major bonspiel and third as a skip. Epping played second for Wayne Middaugh at the 2009 Trials, finishing out of the playoffs with a 2-5 record. Four years later, he was skipping his own team and finished at the bottom of the standings with a 1-6 record.

Ryan Fry was at those Trials as well, the first of his career, and was integral in helping Team Brad Jacobs claim victory. Of course, Team Jacobs would travel to Sochi, Russia and win gold for Canada, the most recent medal this country has earned in men’s four-person curling.

Both Epping and Fry returned to the 2017 Olympic Trials with Mat Camm now playing third for Team Epping. Epping and Fry’s Team Jacobs struggled throughout that week and finished out of the playoffs with 2-6 and 3-5 records, respectively.

I am humbled and honoured to have the chance to work with Team Epping. Great curlers and more importantly great guys. Can’t wait to get this show on the road. Thanks so much for the opportunity. Also can’t wait to work with Jim Wilson aka Rock Bottom. #2021OlympicTrials https://t.co/K8BocqTcSp

Team Epping announced earlier this month that Howard will join the squad at the Trials as an alternate. Like Laing, this will be the 59-year-old's sixth appearance at the Olympic Trials.

To kick off the quadrennial, Epping competed at his first Tim Hortons Brier in March of 2018 in Regina with Camm, Pat Janssen and Tim March.

The foursome put together a great week at the Brandt Centre, qualifying for the 1 vs. 2 game after posting a 9-2 record through the championship pool. In the playoffs they lost to Brad Gushue and Brendan Bottcher to finish fourth.

After the season, Epping shook up his lineup by adding popular sweeping duo Laing and Craig Savill to the squad. Laing was fresh off an Olympic run with Team Koe while Savill was returning to pro curling after battling and defeating cancer.

The new crew got off to a good start in 2018-19 by winning the Masters on the Grand Slam circuit. Despite losing the Ontario Tankard to Scott McDonald, Team Epping’s strong play on Tour earned them a spot in the wild-card game at the 2019 Brier where they lost to Bottcher’s team.

Epping made another roster change in the off-season, adding good buddy Fry who had departed Team Jacobs. Savill left Team Epping after just one season as Laing was moved to lead and Camm to second.

Team Epping came out of the gates on fire with two early victories on Tour before taking the prestigious Canada Cup in Leduc, Alta., to book their spot at the Saskatoon Olympic Trials. They’d also make a Grand Slam final and run the table at the Ontario Tankard to qualify for the 2020 Brier in Kingston. As the home province team, they were a win away from making the playoffs, but lost a second tiebreaker to Team Jacobs.

Epping’s rink returned to the 2021 Brier as the reps from Ontario and finished outside of the playoffs with a 7-5 record.