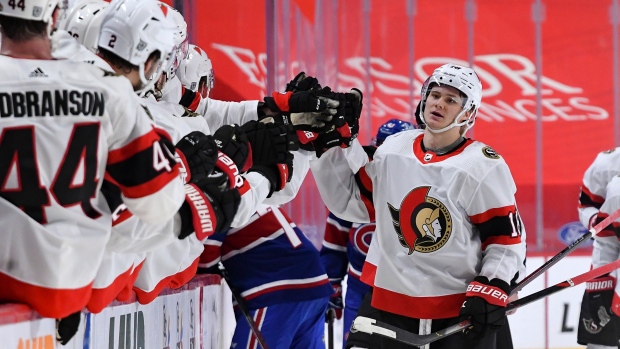 MONTREAL — For goalie Matt Murray, it feels like the Ottawa Senators have spent weeks looking for a break.

After winning their season opener against the Toronto Maple Leafs back on Jan. 13, the Senators fell into a deep slump, dropping nine games in a row in dramatic fashion.

A glimmer of hope came Thursday as Ottawa downed the Montreal Canadiens 3-2.

"It just felt really, really good to get off that streak here," Murray said after the win. "And I think this one’s going to propel us in the right direction.”

Heading in, a Senators victory seemed unlikely. Ottawa (2-8-1) ranked dead last in the league with just three points while Montreal (7-2-2) sat atop the NHL standings.

Beating the top squad could be a boon for the Sens confidence, said defenceman Thomas Chabot.

“Whenever things don’t go our way, it’s hard obviously to stay positive at times," he said. "But just the fact that we showed up here at the Bell Centre against the best team in our division and we stepped up our game to get the win, obviously it wasn’t pretty at all times, but when you’re going through nine losses in a row, you’re getting a little nervous by the end. But I’m so happy we got it done.”

Ottawa's break finally came in the final minute of the first period.

Chabot knotted the score at 1-1, clanking a shot off the post and in with 39 seconds left on the clock. Rookie Tim Stutzle registered an assist on the play, his first in the NHL.

Moments later, Connor Brown drew a holding call on Jeff Petry to give the Sens their first power play of the night.

Ottawa was quick to capitalize on the man advantage. Chabot sliced a pass to Stutzle and he unleashed a lethal wrister from the face-off circle, beating Montreal netminder Carey Price cleanly.

The 19-year-old German had a goal and two assists on the night, extending his scoring streak to three games.

Heading into the first intermission with a 2-1 lead was a big deal, Smith said.

“We found a way to get out of the first period with a lead, which we haven’t done for awhile. And then we built confidence from there," he said.

Price admitted that conceding a pair of goals with seconds left to play was "a bit deflating."

“It leaves a bit of a sour taste in your mouth," said the goalie, who stopped 19-of-22 shots on the night.

“They definitely played pretty solid for the first two periods. I thought it took us a little while to get our legs under us.”

Brown netted the game winner midway through the second frame, tipping in a long bomb from Erik Brannstrom.

Montreal bookended the game with goals from Brendan Gallagher and Josh Anderson.

The Canadiens didn't head into Thursday's matchup assuming they would get an easy win, said Habs coach Claude Julien.

“This one here, it stings because we had a bad game in our system and tonight was the night," he said. "I don’t think we looked at Ottawa as an easy game. For sure our guys didn’t see it like that. We just didn’t seem to be in sync tonight.”

Julien saw frustration in his players through the second period and heading into the third, told them to simplify their game.

“That’s part of adversity during the season, is how do you manage that. So I thought we did a good job in the third, coming out and finding our game again," the coach said.

The Canadiens pushed, outshooting the Sens 18-5 in the final frame.

Anderson clawed back a short-handed goal with 1:29 left on the clock after Ben Chiarot was handed a double-minor for drawing blood when he caught Brady Tkachuk with a high stick.

It was the Canadiens' seventh short-handed goal of the season.

Other golden shots clanked off the posts or were gobbled up by Murray, who had 36 saves on the night.

The veteran goalie has been hard on himself through Ottawa's losing skid, said Smith.

“I think he’s putting a lot of pressure on himself to come in here and be our be all and end all when really, I think he just has to be himself," the coach said.

"As our team gets better and these young guys really perform in front of him, he’s going to be the guy who holds the door. And he did that tonight.”

Despite the result, Ottawa lingers at the bottom of the NHL standings, one point behind the 30th-place Detroit Red Wings.

A rematch between the Sens and Canadiens will take place in Ottawa on Saturday.

NOTES: Phillip Danault skated in his 350th NHL game. … The Canadiens recognized Shea Webber's 1,000th game before puck drop, playing a video with congratulatory messages from around the league. The Montreal captain was then joined on the ice by his wife and three kids and presented with a painting and a commemorative silver stick.

This report by The Canadian Press was first published Feb. 4, 2021.