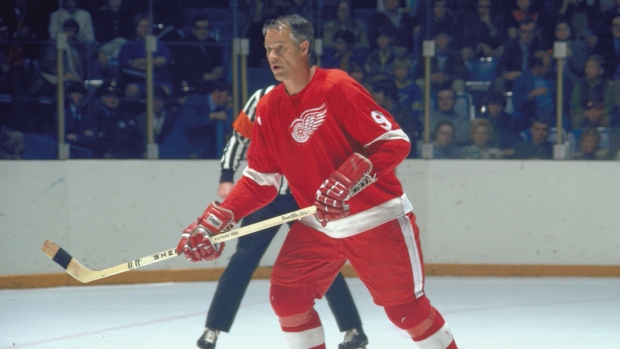 1944 – Signs with Detroit Red Wings and is assigned to junior team in Galt, ON

1948 – After Roy Conacher leaves the Red Wings, Howe wears the No. 9
- Red Wings are swept 4-0 by the Toronto Maple Leafs in the Stanley Cup Final

1950 – Finishes the season with 35 goals, beginning a streak of 22 years with 20 or more goals
- His 35 goals and 33 assists are good for third in league scoring, finishing behind 'Production Line' teammates Ted Lindsay and Sid Abel
- Fractures skull in playoff game against the Leafs; needs surgery to relieve swelling on brain
- Red Wings defeat the Rangers in double overtime of Game 7 to win the Stanley Cup

1951 – Notches 43 goals and 43 assists to win the Art Ross Trophy as league's top scorer for the first of six scoring championships, beating the next closest competitor by 20 points

1953 – Repeats as both Art Ross and Hart Trophy winner, posting 49 goals and 46 assists

1967 – Wins Lester B. Patrick Trophy given for outstanding contribution to the game of hockey in the United States

1971 – After 25 seasons, citing a chronic wrist problem, he retires to take job with the Red Wings' front office
- Named to the Order of Canada

1976 – Gary L. Davidson Award given to the WHA's MVP is renamed the Gordie Howe Trophy