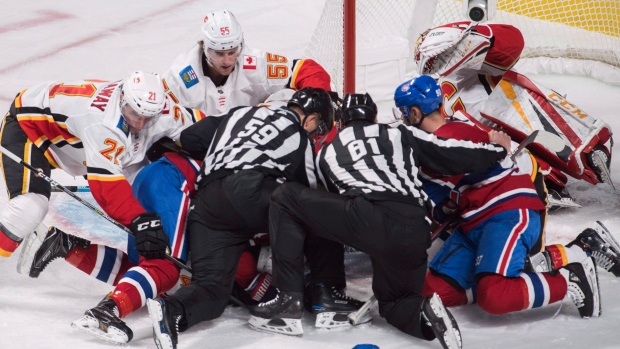 Flames vs. Canadiens , The Canadian Press

David Rittich made 37 saves on Tuesday night, but it wasn't enough to lift the Calgary Flames over the Montreal Canadiens.

The Flames managed to throw just 23 shots on net in a 3-2 loss, failing to capitalize on a second straight strong start from Rittich.

“We talked about how our efforts haven’t been great recently and how our goalies have been bailing us out,” Matthew Tkachuk told the Calgary Sun after the loss. “And then a similar thing today. That’s the frustrating part.”

Flames head coach Bill Peters elected to give Rittich the nod in net over starter Mike Smith following a 44-save performance against the New York Rangers in a 4-1 win on Sunday.

Tkachuk, an alternate captain, accepted his share of the blame while calling out the team's effort as a whole after the loss.

“That’s an embarrassing effort. That’s a bad way to play,” Tkachuk said. “We leave our goalie out to dry for the whole game. I mean, he’s not God in there. You can’t stop everything. At one point, they’re going to go in.

“Myself included, lazy plays in front of our net in our zone and they get ahead of us. And taking long shifts, myself included. We’re getting out there, we’re tired, and they just keep getting these chances. And eventually, they’re going to go in.

“It was a bad effort after we got away with one in New York because of our goalie. So maybe tonight, we could return him the favour and play well — and hope he plays well, but if not, we bail him out.

“But the opposite again.”

The Flames have been outshot 85-46 over the past two games, though their shot differential average for the season sits at just negative 0.8. With a games against offensive powerhouses in the Pittsburgh Penguins and Washington Capitals next up on the schedule, Calgary has no choice but to find a solution to their recent woes.

“If we expect to play like that, we’ll be probably blown out of the building by these teams that are coming in,” Tkachuk said. “So we have to sharpen it up.”