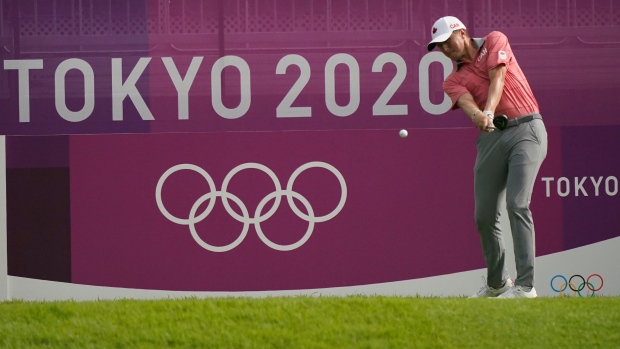 ​Mackenzie Hughes and Corey Conners finally got the rounds they were looking for on Saturday. They’ll have to be even better on Sunday if they hope to reach the medal podium.

Hughes made eight birdies en route to a six-under 65 while Conners signed for a score one shot higher. They were among the best rounds of the day at the Kisumigaseki Country Club, which played nearly a stroke easier than the first two days of competition. Together, the two Canadians had a better ball score of 11-under par.

“Today the difference really was I saw a few putts go in the hole from a little bit further out, kind of mid-range distance,” said Hughes. “Kind of got the round going a bit, got me some momentum and it was really a fun day. Kind of wish I could have gotten a couple more but happy with the day overall.”

Hughes, who started on the back side, rolled in putts from 30 feet on the 16th hole and 21 feet on the 18th, making the turn in three under.

After a bogey on the first, he went on a run, reeling off five birdies in a six-hole stretch. Only a bogey on his final hole spoiled the fun finish.

Conners was bogey-free on his round and unlike the first two days, his normally precise iron play returned as he hit 15 greens in regulation. All five of his birdies were putts from inside six feet. On the par-5 eighth, his approach came from a greenside bunker where he hit his ball to tap-in distance for a four.

Despite the good score, the Listowel, Ont., product felt he could have been even better.

“I could have got a lot more out of the round,” said Conners, who came back early on Saturday to finish up his second round. “I feel like I played well and gave myself a lot of good chances and wasn't able to get super hot.”

But there was plenty of heat on the course. The day was another punishing one with high temperatures and punishing humidity. Hughes said he was hunting for shade at every opportunity while pouring in the fluids. Conners caddie, Danny Sahl, fed his player a steady diet of towels, which he dipped in ice buckets provided by

the tournament. A second set of towels wiped away the sweat and kept the grips from slipping.

“This is probably one of the hotter days I played ever,” Conners said. “Living in Florida now used to kind of the heat and humidity but it was toasty out there for sure.”

The Canadian duo are well back of top spot but aren’t ready to give up on the possibility of winning a medal.

“I know I'm still well on the outside looking in,” Hughes stated, “but I do have a chance and you always have a chance until the last shot, I guess, so I'm going to give it all I have tomorrow and we'll see what happens.”

The top of the leaderboard features some of the heavy hitters in golf including American Xander Schauffele, whose grandparents live in Tokyo, and Hideki Matsuyama, the Masters champion and home-country favourite.

Two major champions representing Ireland, Rory McIlroy and Shane Lowry, are likely to be in the thick of things on the final holes on Sunday after solid scores on Saturday.