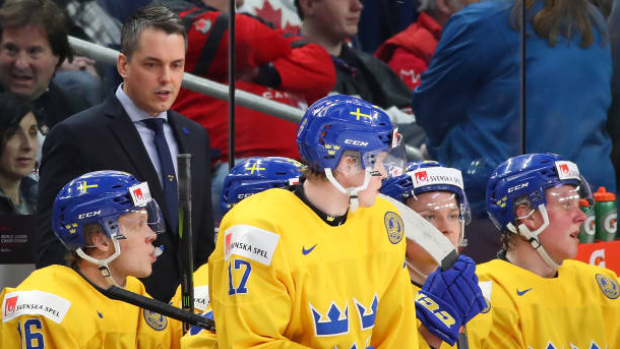 So, who ​will be the top Swede selected in the 2020 National Hockey League draft? For Tomas Monten, Sweden's head coach at the World Juniors, it's hard to separate the pair when it comes to pure talent.

"It's up to the team and what they need," Monten said. "Do you want a finisher or more of a playmaking forward?"

Holtz potted nine goals in 35 games in the Swedish Hockey League this season and also struck three times in seven games at the World Juniors. The 6-foot, 192 pounder owns one of the best shots in this year's draft class.

Monten compares the style of Holtz to Pittsburgh's Patric Hornqvist.

"He's a top forward who scores a lot and is heavy around the net. I think that's what Alex could end up as."

“A hungry and determined scorer who probes for those opportunities and when they arise, he attacks...”

Raymond stands 5-foot-11, 170 pounds and reminds Monten of another shifty winger who plays for the Toronto Maple Leafs.

"A Mitch Marner type," notes Monten. "He can find openings and is very smooth with the puck. He can control the puck in tight areas and make plays all over the ice. But he's a scorer as well. He scored three goals in the under-18 final game a year ago, so he can shoot the puck as well."

In his latest mock draft, TSN Director of Scouting Craig Button has Raymond, who produced 10 points in 33 SHL games this season, going to the New Jersey Devils at No. 7, with Holtz heading to the Buffalo Sabres at No. 8.

"Alex is a little more NHL ready," Monten said. "He's a little bigger and stronger. He played a full season in the men's league over here and Lucas had a tougher year trying to get ice time in Frolunda and he had some injuries and an illness going into the World Juniors."

“A hungry and determined scorer who probes for those opportunities and when they arise, he attacks...”

Monten is hoping Raymond and Holtz will play big roles at the 2021 World Juniors scheduled for Edmonton and Red Deer. During a conversation with TSN this week, the long-time Swedish bench boss explained how the COVID-19 pandemic has impacted his preparation for that event. Monten also shared insight on some of Sweden's top Canadian NHL team prospects, including Leafs defenceman Rasmus Sandin and Winnipeg Jets forward ​David Gustafsson.

Sandin played 28 games with the Leafs this season and was named the top defenceman at the World Juniors, what allowed him to take such a big step?

"Last year, he was more of an offensive defenceman and this year he's more competitive. He can defend and can make plays and I think he matured a lot. So, he's a modern defenceman, the type of defenceman who not only is making plays and putting up points, but is able to defend as well. He's mobile and skates good and he can play a good one-on-one game as well. He was with us last year [2019 World Juniors] and was really good and, actually, we didn't think we'd get him this year. He started the season with the Leafs, and my feeling was he wasn't going to be available."

He'll be at Leafs training camp this summer with a chance to earn meaningful minutes in the playoffs. Do you sense he has that X factor and rises to the occasion in pressure moments?

"Yeah, for sure. He was one of our best defencemen last year and was the best this year. He was a big leader on the ice and off the ice as well. He got banged up a couple times, but he comes to the rink every day to perform. He makes the players he plays with better and that's a good quality."

During the World Juniors, I asked Sandin to describe Canucks prospect Nils Hoglander and he said: 'He's got his own swagger. He's a little bit different. He might not be a typical Swede, but he's a guy you like to have on your team.' What do you like about coaching him?

"He's the kind of player that you want on your team, because he can make a difference. Some of the stuff he does and some of the goals he scored during the World Juniors, you just don't understand how he can do it in that kind of situation. He thinks the game quicker than a lot of the others and I think, for him, sometimes he just sees it slower and that’s how he manages to do the things that he does. He's really down to earth and doesn't talk much. He works really hard and is really thorough about everything, his stick, his conditioning, everything. He doesn't take anything for granted. He works for everything."

In what way is the Rogle forward thorough about his sticks?

"He works with them every day and just changes things and it feels like he's always walking around with his sticks. I don't know maybe he sleeps with them as well."

Hoglander scored five goals at the World Juniors, but none prettier than the lacrosse-style one against Finland on Boxing Day. What went through your mind when he pulled off that move?

"I mean, he did it in the SHL earlier, but this was different. It was our first game against Finland, and I remember we just had a power play and it wasn't that good and he skated around the net and did it just as the penalty expired. I asked him how he could see that, and he said, 'I had a feeling. The goalie went down and I'm pretty quick.' All the players on the bench went nuts. The fans weren't that happy, but that's part of the game."

Is Nils Hoglander’s lacrosse goal the goal of the #WorldJuniors tournament so far? 🤔🥍 #JayAndDan pic.twitter.com/cv1R3BNL2B

When we spoke about Oilers prospect Philip Broberg last summer you said that playing defence with Skelleftea would help him, because he would need to play more of a shutdown role. What development did you see in him?

"He's been more thorough. He can still move the puck and skate the puck and can create offence, but he just makes better reads and knows when to go and try and skate through situations. He's a little smarter and knows when to check the puck and when he can make plays. He got to play a lot in defensive situations both with us and Skelleftea. He played a lot of PK for us and played with [Tobias] Bjornfot on our first pairing and played a lot against top lines and that's what he needs to do to make the NHL. I mean, he's always going to have his skating and he has the skills to skate the puck and break the systems down, but for him to play in the NHL he needs to play the whole ice and that's what he learned this year."

Montreal Canadiens prospect Mattias Norlinder also played a defensive role on the blueline at the World Juniors. What sort of potential do you see for him?

"He wasn't with us a lot. We wanted to bring him to Plymouth last summer, but he was injured, so, actually, the first time he wore our national team jersey was in November in our last tournament before the World Juniors. I compare him a bit to Broberg, the same kind of guy, a smooth skater, but he's a little quicker. Broberg has a heavier stride. But Mattias can make plays and skate with the puck and break down the opponents. He can defend really good. If you're going to play against [Connor] McDavid and [Nathan] MacKinnon and guys who have incredible speed, it will help if you're a smooth skater and he is."

Last summer you mentioned that Winnipeg Jets forward David Gustafsson was getting faster with his decision making. After playing 22 NHL games this year and serving in a top-line role at the World Juniors, how fast is he now?

"He was really good. It's the same as with Rasmus, we didn't think we were going to get him and were really happy when the Jets called us. He really led our first line and he is a workhorse. He has the work ethic. He made Hoglander and [Samuel] Fagemo play as goo​d as they could. He won the faceoffs, he got them the puck in the right situations and did all the work so they could use their skill at 100 per cent. That's the best thing. He's getting quicker. He's really smart and makes quick reads. If you give him one more summer that big body is going to fill in a bit more and he'll be a really good player."

David Gustafsson makes it 5-0 Sweden. Nils Hoglander and Nils Lundkvist get the helpers.

Hoglander is now the tournament leader in points with 10. #WorldJuniors

How is the pandemic impacting your evaluation of players and preparation for the 2021 World Juniors?

"I was supposed to go to Plymouth in April to watch the U18 [world championship] and that was cancelled. We were supposed to be at the Summer Showcase in Plymouth in July and that was also cancelled. We don't really know when we're going to get started and what kind of situation we're in. We have an invitation to go to the Czech Republic in the last week of August to play the Czechs, the Finns, the Russians, but for now Swedes aren't allowed into the Czech Republic. We want to go, but can't until the authorities change their restrictions. If that won't happen we'll hold a camp in Sweden in the last week of August, but before that we won't be able to do anything."

What is the strength of this year's group?

"I mean, we have a couple returnees. We have three really good defencemen that could help us on the blueline. So, it's about getting the best out of the '01 [birthdays] and the '02s. Unfortunately we didn't get to see the '02s play in the U18s so they have more work to do to convince us they can play at the World Juniors. Hopefully, we can build on the good stuff we had last year with a good goalie and good mobile defencemen and scoring forwards."