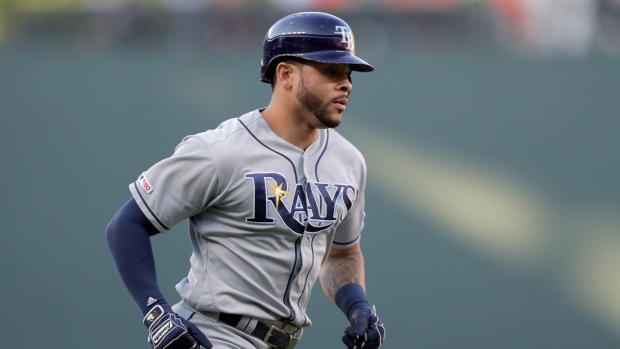 “I think we’re going to have to do a better job of controlling the strike zone,” Pham said Thursday on the Padres' first day of spring training workouts. “From when I played against them with Tampa, from what I saw outside looking in, we didn’t do a good job controlling the strike zone. There were a lot of punch -outs. Tampa is one of the best staffs in baseball, they strike out a lot of guys, but you have to give yourself a chance.”

Pham struck out 123 times in 654 plate appearances in only full season with the Rays, who traded him on Dec. 6. His analysis was informed by a three-game series between the teams in August, when the Rays won twice and their pitchers struck out 39 in 26 innings.

“Strikeouts are a part of the game. Don’t get me wrong, I strike out a lot, too,” Pham said. “But make the pitcher work for it. Go down with a fight. You don’t want to strike out in three or four pitches.”

Pham, a late-bloomer who turns 32 in March, has 65 home runs and 65 stolen bases during the last three seasons for St. Louis and Tampa Bay. He also drew 219 walks in that span, a .381 on-base percentage. No Padres regular has exceeded that mark since Adrian Gonzalez's .393 in 2010.

“I’d hate to cap somebody and put a ceiling on what they can do,” manager Jayce Tingler said of Pham's possible contribution.

Pham injured the ulnar collateral ligament in his right elbow last season and received plasma-rich platelet injections through the off-season. He is on a throwing program that is expected to return him to full strength by opening day, Tingler said.

Pham thinks the Padres are similar to the Rays.

“Young team, up and coming, and they are trying to transition to that next step,” Pham said. “I’m happy, man, because one, I have a job and two, any team that trades for you, they want you. They want you to be a part of something. So here I am.”

Pham has been a good fit in Petco Park, where he has three homers and six RBIs in 41 plate appearances. He had two hits and a homer in his one game there last season.

Tingler praised Pham's drive and ability to compete. Pham said those traits were shaped by Cardinals veterans such as Yadier Molina and Adam Wainwright.

“When I came up, I saw Yadier and Wainwright, two very established players that I greatly respect, they never were sitting down. They constantly were bettering themselves. I’m happy I was able to see that, because it only made me better. I just watched them go about their business. You don’t want to be sitting around horsing around doing nothing if Yadi and Waino are working.”

Notes: RHP Chris Paddack arrived with a large tattoo of a blue-eyed lion on the outside of his left forearm. It is positioned so hitters can see it as he begins his delivery. Paddack, 9-7 with a 3.33 ERA as a rookie last season, said his goal is to be the opening-day starter.