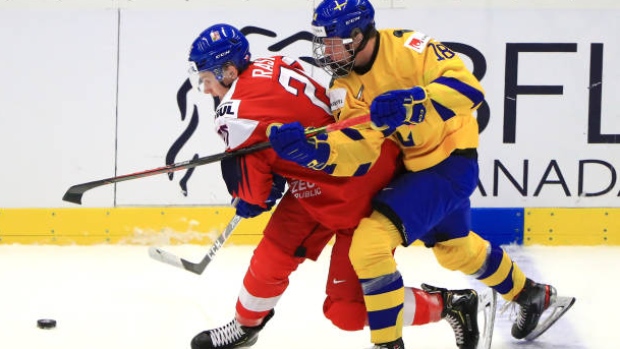 “I'd say I'm a mix between Mitch Marner and Artemi Panarin," the 18-year-old Frolunda winger, a top prospect in the next draft, said. "I really like watching t​hose two play."

"I just like his playing style," Raymond said of Marner, "and the way he attacks the net. He's creative with the puck, having different opportunities to score whether it's shooting or passing. I just like his game, the way that he plays all around."

Marner was the fourth overall pick in the 2015 draft. Raymond, who stands 5-foot-11, 170 pounds, came in No. 9 on Button's penultimate list of top prospects. He finished No. 4 on NHL Central Scouting's list of European skaters.

Raymond logged limited minutes while playing against men in the Swedish Hockey League this season, finishing with four goals and six assists in 33 games. He also produced 14 points in nine games with Frolunda's junior team.

Raymond's focus this summer is to become a more well-rounded player.

"The mentality to shoot even more is something I'm working on right now," Raymond said, echoing comments Marner made early in his career. "I can sometimes look for passes and miss a shot opportunity and I think at the next level up you don't have the same time and space."

Raymond spoke to TSN via Zoom on Thursday and explained how his mom, a nutrition coach, helped his development. The Swede also broke down his hat trick performance in the gold medal game at last year'​s under-18 World Championship. The following is an edited transcript of the interview.

Sweden is taking a more relaxed approach to the coronavirus outbreak. What's life like there?

"Sweden is pretty open right now. The teams are practising and the gyms are open, so pretty calm here."

Have you been practising during the entire pandemic?

"Yeah, almost. We got a little free time after the season ended, but we've been practising for about three weeks now. So, it's working pretty good. We're fortunate to be able to do it. I, personally, would freak out just staying at home. We're pretty lucky here."

What do you think about the possibility of the draft happening in June instead of waiting for the NHL season to finish?

"I don't really know what's going on right now. We just have to wait and see. If the draft's in June, then I’ll be, of course, excited and really happy."

How did you feel about your season in the Swedish Hockey League?

"It was a good season, I think. Playing in a men's league, it's a big difference from juniors. With the team we had with such a good roster, I learned so much this year. I really had to fight for it and developed a lot not just on the ice, but off the ice as well by getting to be around those guys every day and see how they worked and practised. I developed a lot."

What's the No. 1 thing you learned?

"I'd say the work ethic and [the need] to develop that even more. To see guys like Joel Lundqvist, our captain, 30-plus years [of age] and he's still one of the hardest working guys on our team, that's really inspiring. You need to put in the work and not just settle for the team practice. You really have to train."

So, you expanded your off-ice habits?

"Yeah. I have always been the type of guy who stays on the rink a bit longer or [comes on] before, but really took it to another level. I think that's a big thing you learn."

You posted two goals and two assists in seven games at the World Juniors while helping Sweden win a bronze medal. What stood out about that experience?

"It's something you dreamed of since you were a little kid watching it growing up. It was an amazing experience in the Czech [Republic] and I had a lot of fun. Unfortunately not ending in gold, but it was still a cool experience."

Your mom works as a personal trainer and nutrition coach. How has she helped you?

"Of course, it helped me. But sometimes it's different hearing it from your mom. I think if somebody else who wasn't my mom would've told me the same things I probably would have bought it even more (smiles). But she helped me a lot. It's something that's become natural for me since I grew up learning about food and what to eat and what not to eat."

Is your diet different than others your age?

"Yeah, probably a bit, but I think it's pretty basic stuff that people already know and not anything extraordinary."

But it's certainly different when you have your mom at home looking over you, no?

"Yeah (smile) it's tough having a cheat day."

You and fellow Swedish prospect Alexander Holtz have been coming up together. Which player does he remind you of?

"We are very good friends. He's a humble guy who works hard. A funny guy and I like hanging out with him. He's a great player and person as well so we have fun together."

What did it mean to you to score a hat trick, including the golden goal, in the under-18 Worlds in 2019?

"It was a cool experience. It was probably the biggest thing so far [for me] winning it here in Sweden and in front of family and friends. It was a huge experience and to be able to score was just a bonus. We had a lot of fun in the tournament and really [came] together as a team."

Let's go through the goals, which came against fellow top prospect Yaroslav Askarov. The first one, you carried the puck through the neutral zone and made a beautiful stick-handling move through the defenceman. What do you remember?

"I remember getting a good pass from Alex from the defensive zone and coming in against the defender. I tried to go inside first, but he was with me so I went outside and saw the post was open and shot it there."

Lucas Raymond with the filthy goal for Team 🇸🇪 in the gold-medal game at the #U18Worlds 😱🙌 pic.twitter.com/P5BOTrkQRY

The second goal came right after Russia took a 3-2 lead midway through the third period and it was also assisted by your buddy Holtz. What do you remember?

"We were under pressure. They played really well. Alex gave me a great pass in the slot and I just tried to hit it as fast as possible, a one-timer, and it went in. It was a relief and a push for our team in that game."

The Lucas Raymond/Alex Holtz combo combine for the 2-2 goal. Holtz gets this one. #U18Worlds pic.twitter.com/cKzuYctEL3

What are you thinking on the overtime goal?

"I got a pass across the offensive zone and I faked outside and went inside and saw the first post was open and just tried to hit it as good as possible and it went in and then (smile) I can't remember that much more. I got pretty excited. It was an extremely happy feeling. It was one of my biggest moments so far in my short career."

Lucas Raymond 🇸🇪 completes his hat trick performance with the OT winner to win gold at the #U18Worlds! pic.twitter.com/ItCfTpRjlS