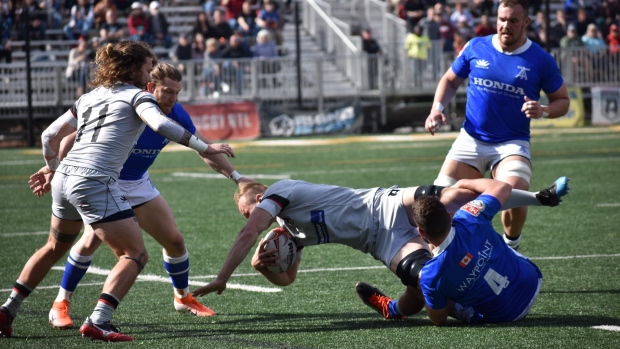 TORONTO — The Toronto Arrows are the latest Canadian team to move south of the border to start their season.

Major League Rugby announced Wednesday that the Arrows will share facilities with Rugby ATL in Marietta, Ga., because of pandemic-related border restrictions. The Atlanta franchise plays at Life University's Lupo Field, some 35 kilometres northwest of the city.

The San Diego Legion had previously announced they will play their home games in Las Vegas because of the COVID-19 situation in California.

"The two teams have worked in concert with the league, showing a dedication and passion to keep professional rugby moving in the right direction in North America,” MLR commissioner George Killebrew said of Toronto and San Diego.

The Arrows said they do not know how long they will have to play south of the border.

The North American league is home to some 60 Canadians, according to national team coach Kingsley Jones.

MLR also released a revised schedule Wednesday, due to the decision by the expansion Dallas Jackals to put off play until 2022. Opening day for the league's fourth season remains March 20 when the Arrows open against Rugby ATL.

The Arrows plan to open training camp Monday at home.

"We'll simply go down for the first game as normal and then stay there," said Mark Winokur, COO and GM of the Arrows.

Winokur said the team chose Atlanta because it was in the same time zone as Toronto and offered good travel options via Hartsfield-Jackson Airport.

"Good relationship with their (Rugby ATL) team, good facilities, good weather," he added. "A willingness on their part to work with us. I mean it's a big ask."

Winokur said the Arrows travelling party will number "less than 40" with close to 30 of those players. A few players won't be able to go south due to work or family commitments, he said.

The team will stay at a local hotel to start. Winokur says the Arrows will investigate other options as needed.

"It's very complicated," Winokur said of the move. "There's insurance issues, visa issues. Then there's everybody's personal issue. I would say it's not something that I would want to do again. But given the circumstances, you've got to do what you've got to do."

The season will feature 12 teams competing over 18 weeks in a two-conference balanced schedule. The top two seeds from each conference will qualify for the post-season with the championship game scheduled for Aug. 1.

While San Diego is moving out of California, Winokur said it was his understanding that expansion Los Angeles is staying put.

MLR was five weeks into its 2020 season when it halted play temporarily on March 12 due to the pandemic. A week later it called off the season.

May 15 at Houston Sabercats.

May 29: at New England Free Jacks.

This report by The Canadian Press was first published Feb. 3, 2021