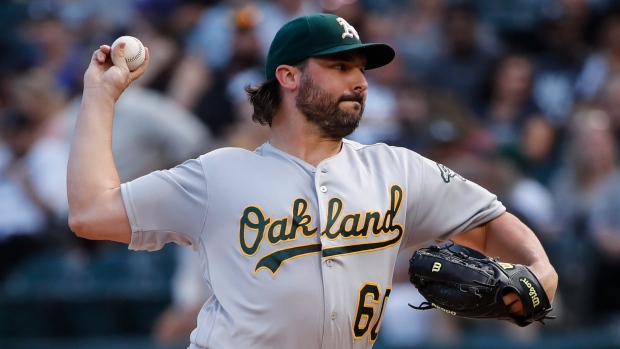 After weeks of talk, the Toronto Blue Jays have finally made an addition in the free agent market.

According to TSN Blue Jays reporter Scott Mitchell, the Jays have agreed to terms with veteran starting pitcher Tanner Roark on a two-year, $24 million deal.

Can confirm #BlueJays have come to terms with right-hander Tanner Roark, per source.@ShiDavidi and @bnicholsonsmith had the news first.

Mitchell adds he needs to pass a physical before the signing becomes official.

Roark spent last season split between the Cincinnati Reds and Oakland Athletics, pitching to a 4.35 ERA with a 10-10 record in 31 starts spread out across 165.1 innings. The 33-year-old right-hander was dealt from the Reds to the A's on trade deadline day in exchange for pitcher Tanner Rainey. Prior to his time in Cincinnati, Roark spent six seasons in Washington with the Nationals.

Durability is one of Roark's best qualities as the Wilmington, IL., native has made at least 30 starts in each of the past four seasons. He has a 3.71 ERA and a record of 74-64 over the course of his seven-year career.

Roark was selected in the 25th round by the Texas Rangers in 2008 and made his big league debut in August of 2013.