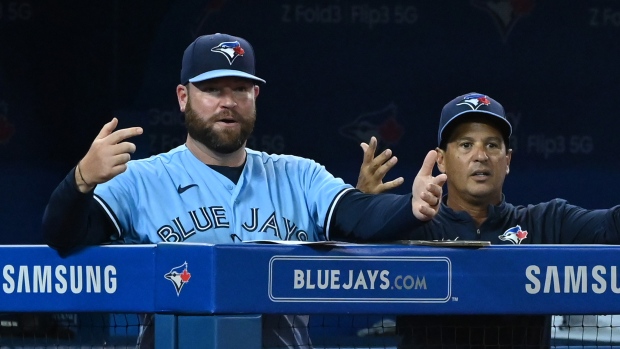 With Montoyo unable to appeal his suspension, it will be served on Thursday night against the Minnesota Twins with bench coach John Schneider serving as acting manager.

The ban comes after reliever Borucki hit Tampa Bay Rays outfielder Kevin Kiermaier with a fastball during the team's 7-1 loss on Wednesday.

Both Borucki and pitching coach Pete Walker were ejected from Wednesday's game. The benches cleared, but order was quickly restored.

On Monday, Kiermaier picked up and a kept a scouting card that fell out of the wristband of Jays catcher Alejandro Kirk during the sixth inning of Tampa's victory, angering the Jays, with the hitting of Kiermaier appearing as retaliatory.

Borucki pleaded innocence after the game.

"I wanted to go down and away, as I was coming forward I felt the ball slip out of my hand and I missed up and in, and I accidentally hit him,'' Borucki said. "They can think want they want over there in their locker room, but it is what it is.''

Montoyo back up his pitcher's claims, citing Walker's incensed reaction as proof that it wasn't intentional.

"Pete's reaction told me everything about it,'' Montoyo said. "He missed. He hit him, but I understand what it looks like. I understood how the Rays got upset about it. That thing was on for two days.''

For his part, Kiermaier was convinced the plunking was intentional and says it became motivation to meet the Jays in the postseason.

"Pretty much almost went behind me," Kiermaier said of the pitch. "I thought it was a weak move, to be quite honest. It's over. It didn't hurt by any means, so I don't care. Whatever. We move on. We got a series win, and I hope we play those guys, I really do."

On Tuesday, it appeared as though the issue had been settled between the two teams. Rays manager Kevin Cash apologized to the Jays and Montoyo called the matter "agua under the bridge." Kiermaier said he thought the card might have been his own scouting card because his had recently fallen out in a game against the Detroit Tigers.

With Wednesday's victory, the Rays clinched a playoff spot. The Jays sit a half-game behind the New York Yankees for the American League's second wild card.